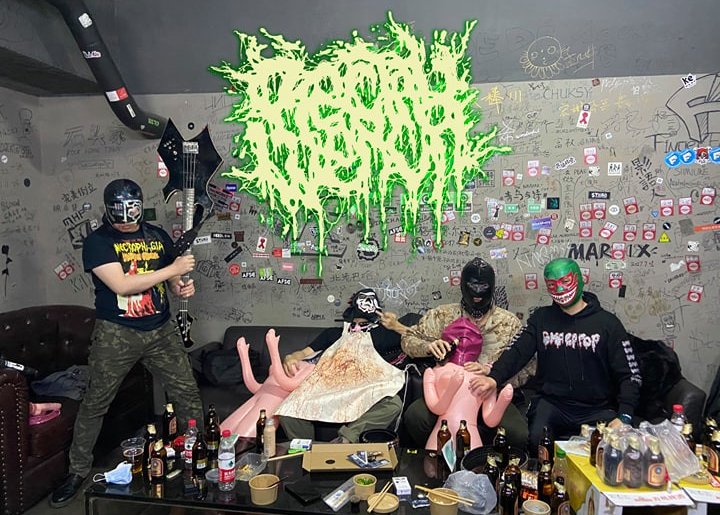 Rectal Wench, the sickest and filthiest band China has to offer, will be releasing an unprecedented 73 minutes of filthy, nasty, groovy porn/goregrind with their latest album, Judgement Of Whore Labia From The Sewer Throne, on March 31 through Splatter Zombie Records.

The luchador wrestling mask (or gimp mask, when they feel like it) wearing, blow up sex doll tossing grinders are well aware that over an hour of grinding sickness is a little excessive. But taking the risk of creating one of the longest goregrind records in existence is worth it, they say.

“We all knew that doing a 73-minute album was so fucking extreme for goregrind music, because goregrind songs are usually short,” says guitarist Laoshi Guo. “We weren’t sure how many minutes a CD could burn with modern techniques. So, we ended up preparing 97 minutes of shit. It’s like a toilet: it’s only exciting when the shit overflows the seat implement. And it did overflow: I was talking to Patrick Manthee, the boss of Splatter Zombie Records, and I realized, well, it doesn’t fit on one CD. In the end, we decided to throw out some songs that weren’t so rotten or grubby.”

With an epic-sized album comes an outsized, gory story to go along with it. Guo assures us that the band and their theme is positive despite the surface level smut. “Our theme is encouraging young people to be inspirational, to face life bravely, and to create a better future with their own diligence and wisdom.”

The story of Judgement Of Whore Labia From The Sewer Throne goes as follows: human society has been ruled by inflatable men and women sex dolls. They are killing, enslaving, and fucking people. Earth-based societies have been dominated and destroyed. Humanity is being held hostage in a sewer made of flesh resembling a giant rectum. The four members of the band then put on their lucha masks and set out to save humanity from the inflatable beings, the only way to save the human world.

“Like our material before, this album is for fans of Cock and Ball Torture, old GUT, SxRxOxM and TPF/PIGTAILS. I hope you can inspire confidence and courage in life after listening to this. It is also hoped that the constipation of the listeners will be cured,” he adds.

“This cover was done by a handsome guy named Stinky Kenny. He’s a tattoo artist from the famous metal tattoo studio Tattooriff in Beijing. He’s a former designer of sexy lingerie. He is our good friend. He is a very happy man, and a very experienced artist.”

The album was recorded between summer 2019 and spring 2020 at the S.A.G. Studio in Beijing and produced by Zhao Xiaodong with Yang Jiaqi assisting in the mixing. Rectal Wench found that there was no specific producer in China who specialized in making the kind of dirty sound they wanted, so went to Xiaodong, or “Dr. Zhao,” who is something of a producing legend in rock and metal in the country. ”We sent Dr. Zhao songs from a lot of bands that we wanted to emulate: GUT, Satan’s Revenge On Mankind and so on. Then we attempted to imitate their production effects from a professional perspective.”

Readers who are into goregrind will ask, ’Does such filthy music really need a top-notch recording?’ “Indeed, although we didn’t go for sound quality or the best effect at all in our songs,” says Guo, “but we did go for quality in the experience of making this album. Although the final product may sound filthy, obscene, disgusting, nauseous, or even watery, I want to tell you, that’s right! That means we’re doing a good job!”

According to the band, during the mixing, Dr. Zhao’s cat vomited when it heard the songs. “He said our album was an insult to professional producers. I felt very honored by the remark. I’m thankful for his strong patience during this program with us. This is the feeling we want!” explains Guo.

In April, Rectal Wench will play a few select shows around China, but the band has aspirations to take their act abroad. “RxWx will take every show seriously and bring the crazy freakshow to our fans. We would also like to take our show abroad and be known and heard and seen by audiences around the world. We want to use music to save humanity. We want to be the heroes of mankind. For humanity!”

Featuring Dressed to Kill, Witchseeker, Hell Freezes Over and more.