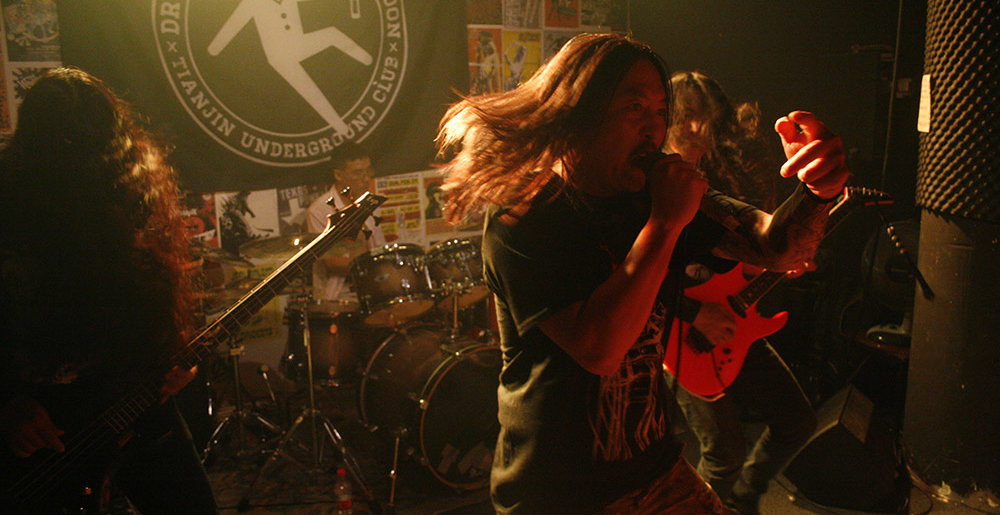 The Chinese thrash band Punisher — recently featured on MetalSucks as one of the Big Four thrash bands of China — have had all of their music removed from the country’s biggest streaming platforms.

“It’s not about who removed it, but the weasels who did the malicious reporting behavior,” a band representative tells MetalSucks after seeing their music wiped from NetEase Music, KuGou and KanJian. “The platforms just want to avoid any possible trouble so they removed everything when there have been repeated and numerous reports.”

It’s not clear whether the music was removed by the streaming services themselves under their own volition or whether country’s government, notoriously unfriendly to metal acts, ordered it taken down.

Punisher’s representative, who speaks fluent English while the band members themselves do not, speculated on why or how the band’s songs have been yanked for China’s streaming platforms. “Speaking of the accusation of being ‘politically malicious,’ the band never intentionally included superficial attacks against the ‘system’ in their lyrics to label themselves as rebellious heroes. They simply wanted to express their feelings and thoughts about society and human nature which originated from what they experienced or witnessed in real life. But it looks like it touched upon someone’s sore spot and thus was considered ‘not appropriate to spread’ under censorship.”

Popular media platform Bandcamp was also recently banned in China. The site is a crucial look for many of the artists residing in the Middle Kingdom to get their material to the Western world.

Still, people from outside of the country have assisted bands in uploading new music to the site. Black metal band Bliss Illusion employed such a strategy to post their latest track, “Mukti,” explaining, “We had time to communicate and transfer the logins to our manager in France. All our music remains and will always be available on the platform, as well as our future productions.”

If you wish to support Punisher, you can still currently stream Punisher’s songs at Bandcamp (maintained with the assistance of a foreign friend).

Read the band’s statement about the incident (via their official Facebook page) below:

“It is simply because some weasel-like haters have repeatedly reported our songs to be “politically malicious”. And under the cultural censorship system in this land, the you-know-whos would rather give us a simple ban than take a real look at what we have really expressed. (Not to mention the music; no, no one really cares about the music itself in here.)

“As a Thrash metal band, we do not wish to give upon our attitude against the darkness and unfairness of “the machine”, and we do not compromise to nonsense censorship. Yet we also do not label ourselves as some kind of rebellious heroes; we simply wish to express our true thoughts and ideas through our music, with no harm to any person, animal, subgroup or society.

“So long story short, our songs are banned from a major online streaming platform in China. We have poured our endless effort, time, money and even hearts into our music and we would like to let the world hear them and discuss them. We care much more about the music itself than any kind of political nonsense. So we hear that most bands outside China have their songs uploaded on Spotify. But with limited access to the outside world, we have no clear clue how it works on Spotify or any other mainstream platforms, and we currently do not have a label to help us with all this. If you could give us any kind of suggestions, it would be highly appreciated.

Featuring Lie to the Silence, Scarlet Horizon, Make You Hopeless, Stabbing and more.

Metal Sucks Greatest Hits
0 -
Slipknot’s Corey Taylor Shares Photo of “Post-Gig Make-Up Debacle” Beneath His Mask
1210 -
MetalSucks Exclusive: Behemoth Frontman Nergal’s First Interview Since Being Diagnosed with Leukemia
0 -
Chris Brown Thinks Municipal Waste are a Fashion Statement
0 -
Which Bands are “The Big Four of Death Metal”???
0 -
The Top Ten YARLERS of All Time
0 -
I Watched Rock of Ages so You Don’t Have To