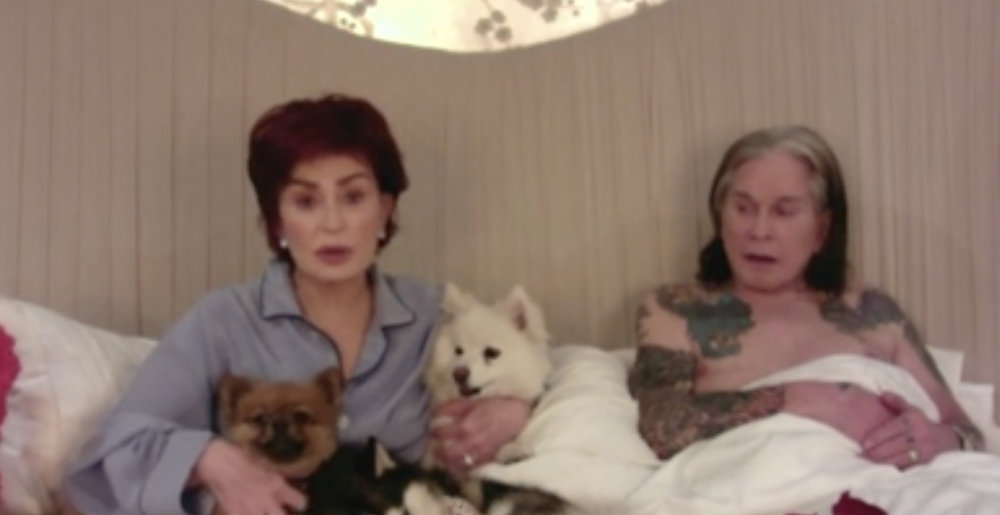 Ozzy Osbourne has released a brief message showing support for his wife and manager, Sharon Osbourne, following CBS’ recent decision to fire her from The Talk.

The message, posted to social media, reads “I can’t f*cking hear you!
#TeamSharon.” It was accompanied by a photo of the couple at a red carpet event, where Ozzy has his hand up to his ear in the universal sign for “speak up.”

The not-so-subtle subtext of the message is that a public outcry could get Sharon her job back — or, more likely, a new job funded by the anti-woke (see: Gina Carano).

Sharon Osbourne’s troubles began last month, when she defended Piers Morgan from claims that his ongoing attacks against Meghan Markle are implicitly, if not explicitly, racist.

On March 27, CBS announced that Osbourne would not be returning to the show:

“The events of the March 10 broadcast were upsetting to everyone involved, including the audience watching at home. As part of our review, we concluded that Sharon’s behavior toward her co-hosts during the March 10 episode did not align with our values for a respectful workplace. We also did not find any evidence that CBS executives orchestrated the discussion or blindsided any of the hosts.

“At the same time, we acknowledge the Network and Studio teams, as well as the showrunners, are accountable for what happened during that broadcast as it was clear the co-hosts were not properly prepared by the staff for a complex and sensitive discussion involving race.

“During this week’s hiatus, we are coordinating workshops, listening sessions and training about equity, inclusion and cultural awareness for the hosts, producers and crew. Going forward, we are identifying plans to enhance the producing staff and producing procedures to better serve the hosts, the production and, ultimately, our viewers.”

In a recent interview with The Daily Mail, Osbourne called the allegations against her “crap”:

She went on to allege that the show’s producers and network executives deliberately sabotaged her:

“If they’d said these execs aren’t happy, I’d have worked on it with them. But give me a chance. Don’t bloody surprise attack me on national TV live for 20 minutes when it was meant to be four other segments.” “We were meant to talk about fucking Pepe Le Pew and they let this go on.”

Osbourne also claims that another one of the show’s co-hosts, Elaine Welteroth — who is also black — was “initially asked… to lead the questioning but she refused when they were unable to provide her with any evidence of Morgan’s alleged racism.

Metal Sucks Greatest Hits
0 -
Metallica’s St. Anger Was Released Ten Years Ago Today
0 -
Deicide’s Glen Benton Sells Out, Tells Fans to Stop Moshing So Violently
0 -
The Single Greatest Analysis of Nickelback’s Work Ever Written
0 -
Website Photoshops Dogs in Place of Bass Guitars Because Why Not?
0 -
Why are metal fans hopelessly stuck in the past??? :(
0 -
Metallica Release Official Animated “Master of Puppets” Lyric Video