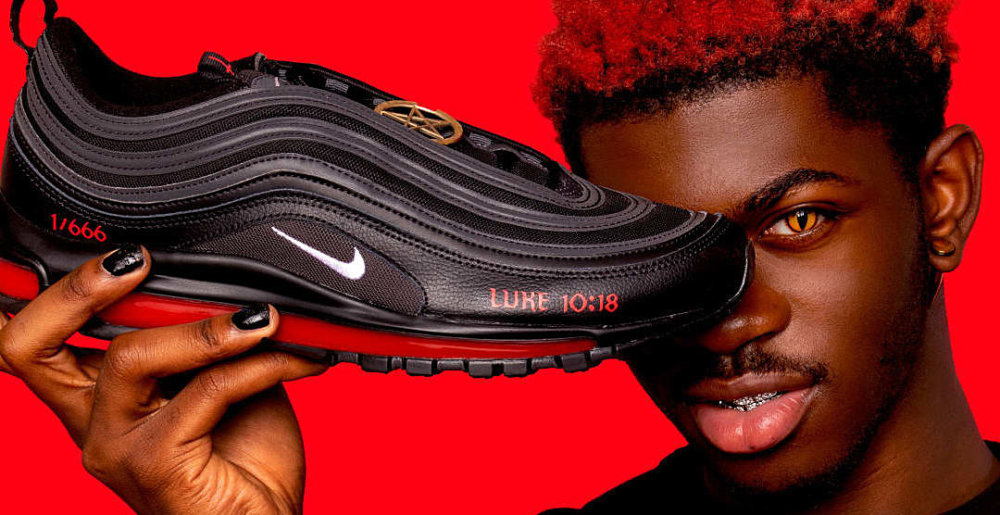 Rapper Lil Nas X, best known for his massive hit “Old Town Road” a couple of years back, caused quite a stir last month with a line of “Satan Shoes” he released to promote his new single, “MONTERO (Call Me By Your Name).” Nike was bothered by the unauthorized used of its sneakers, conservatives everywhere were irate not only by the satanic imagery but by Lil Nas X’s very gay existence poisoning their youth, and the whole thing headed into the courtroom. Metalheads naturally took a fascination with the affair because, y’know, satan.

Good news: the parties have now settled, although the agreement is largely symbolic.

The shoes were brand new pairs of Nike Air Max ’97s spruced up by custom design house MSCHF to feature a pentagram, Lil Nas X branding, and a drop of real human blood in the air bubble color coating. Limited to 666 pairs selling for $1,018, they sold out in under a minute.

After a federal judge first ordered the line of shoes discontinued last week — wholly symbolic seeing as the sneakers had already been unavailable for a while — Nike and MSCHF have now settled. The full terms of that settlement haven’t been made public, and indeed, they could include a large amount of cash changing hands, which certainly is more than symbolic. But the part that has been made public has no teeth whatsoever: anyone wishing for a full refund on the shoes is entitled to send them back to MSCHF to get one, whether the purchaser was “confused” about the product they bought or simply no longer wants it. The same terms applied to the “Jesus Shoes” MSCHF issued previously in a similar manner.

I can’t imagine many folks will return these given the now-historic item of memorabilia they’ve become. If anything, holding on to them for longer will only help, as several pairs currently show up on eBay for between $3,500 and $20,000, although demand could well die down once the hype does. The key to understanding the situation, to me, is the rest of the settlement we aren’t privy to and probably never will be… oh well.

In related news, a metal cover of “Montero” by TikTok’s Ricky Jabarin and Sage Weeber got the seal of approval from Lil Nas X, so maybe we’ll see that come to fruition with the rapper himself soon. And then the satanic circle will be complete.

Metal Sucks Greatest Hits
0 -
Op-Ed: When Did Slayer Start to Suck?
0 -
Converse Rubber Tracks x MetalSucks: Everything All in One Place
0 -
Avril Lavigne Must Be Stopped
540 -
Worst Year Ever: All of Our 2010 Year-End Sh*t in One Place
0 -
Rigged: Luke Hoskin of Protest The Hero
0 -
Rigged: Testament Guitarist Alex Skolnick