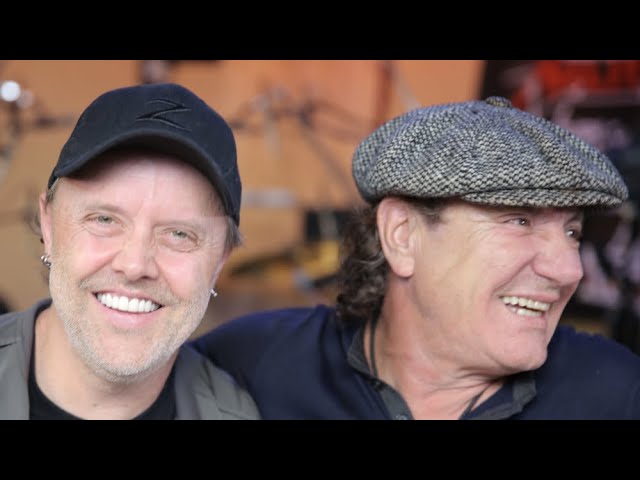 Until this clip came into my feed, I completely forgot that AC/DC frontman Brian Johnson has his own TV show. Brian Johnson’s A Life On The Road has been on-air since 2017 and I’ve yet to see an episode, as I’ve been without cable for about that long… but I reckon the show’s core demo aren’t really cord-cutters.

A past episode of the show that recently made its way online features Johnson’s old pal, drummer Lars Ulrich, taking Johnson on a tour of Metallica HQ. Uber Met fans have likely seen the facility before in the oodles of video content the band has pumped out over the past few years, but it’s still a fun look behind the scenes that’ll likely make you salivate and daydream of having your own decked out rehearsal space.

Though the episode originally aired in 2019, for whatever reason this clip has just made its way online via Johnson’s YouTube channel. Have a look below.

Johnson had exited AC/DC in 2016 after suffering hearing loss but was invited back for the band’s new album, PWR/UP, released last year.

Metallica, meanwhile, are currently deep into “some pretty serious writing” for their next album. After first floating the idea of working on new music while under quarantine in April, by June Lars Ulrich had revealed that Metallica were, indeed, in writing mode. James and Rob have both said they’ve been busy working on new songs, too, and Kirk Hammett has trumpeted the fact that he has over 600 song ideas recorded (after infamously losing his cell phone with 300+ ideas prior to the sessions for Hardwired). The band were having some technical issues collaborating over the internet and were looking into doing so in-person in a bubble last year; Lars recently revealed that new material was coming along at a “glacial” pace.

Sponsored Links from Across the Internet
Show Comments
Related Articles
New Stuff 0
Lars Ulrich’s Sons Are Putting Out an Album
September 13th, 2022 at 11:16am Hesher Keenan