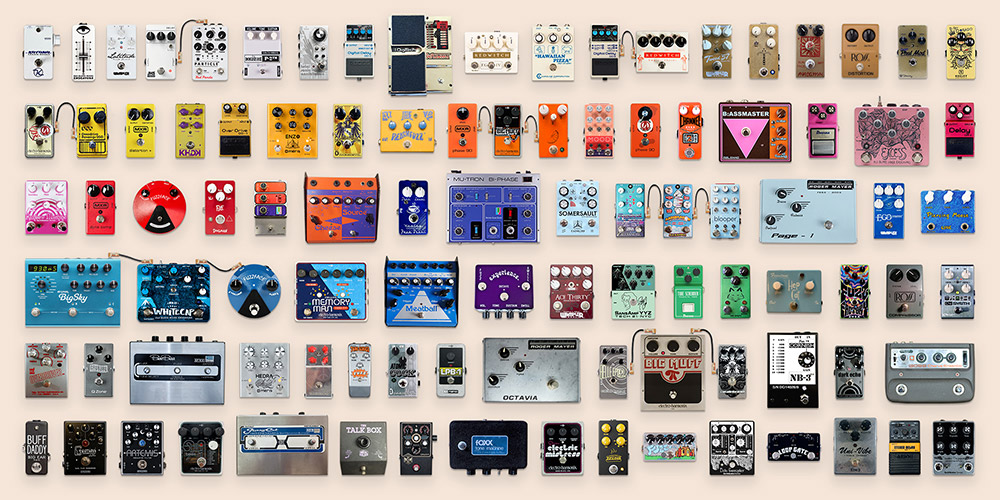 Reverb, the largest online marketplace dedicated to buying and selling new, used, and vintage musical instruments, on Friday released The Pedal Movie on iTunes, Google Play, and Vudu. Reverb’s first-ever feature-length film, The Pedal Movie is the most comprehensive look at how a series of recording studio accidents in the 1960s led to the creation of effects pedals, and how those pedals and their builders changed the sound of popular music as we know it.

“Over the years, effects pedals have shaped our favorite songs and, along the way, created an entire industry of mostly small businesses working alongside their musical heroes. Despite the wide-reaching influence of these tiny boxes, the full story of how they were created and how they evolved alongside the music they shaped has been largely untold,” said Reverb’s Michael Lux, co-director of The Pedal Movie. “It’s a story of ingenuity that celebrates pedals as not just a tool, but a source of inspiration and income for countless music makers and fans. It’s a story we felt we were uniquely equipped to tell based on Reverb’s position within the music-making community.”

From the fuzz pedals that exploded with the Rolling Stones’ “(I Can’t Get No) Satisfaction” and helped define the playing of Jimi Hendrix to the affordable effects that helped spawn shoegaze and alternative forms of rock music in the 1990s and beyond, The Pedal Movie explores how effects and popular music have influenced each other over time. The documentary covers more than six decades of the pedal’s evolution through nearly 100 interviews, including conversations with Peter Frampton, J Mascis, Graham Coxon, Kevin Shields, Billy Corgan, Sarah Lipstate, Nels Cline, Steve Vai, Steve Albini, and more.

“You think about someone like the Edge. You hear a U2 song and if you turn off all the effects, you’re just playing a couple of notes, and it’s probably not a great riff. You put all those effects on, and all of a sudden, you’re filling up an arena. You’re filling up a stadium with a wall of sound,” Minus the Bear’s David Knudson tells Reverb in the film. “So, effects add the dynamics and the intensity and sometimes make the song. Sometimes it writes the song for you.”

In the film, bassist Marcus Miller echoes the importance of effects to creativity and music-making: “It makes you look at music a little differently. Next thing you know, you’re running down the road with some more creativity…there are certain pieces of music that would not be the same without the effect.” According to Dweezil Zappa in The Pedal Movie, effects pedals provide music makers with millions of options. “So that’s either going to drive you crazy, or it’s going to make you so excited and say, this is the best time to be a guitar player,” he says.

Today, there are thousands of effects and pedal brands on Reverb alone, and in 2020, Reverb saw nearly 50,000 searches a day for effects pedals. The Pedal Movie explores how the industry grew from a handful of companies several decades ago to a vibrant community that has helped create not only new songs and genres of music, but new jobs, YouTube personalities, and more. Through conversations with builders and leaders from more than 50 brands—including Chase Bliss Audio, EarthQuaker Devices, Frantone Electronics, Gamechanger Audio, JHS Pedals, Meris, Strymon, Walrus Audio, Wampler Pedals, Way Huge Electronics, Dogman Devices, ZVEX Effects, ThorpyFX, Fuzzrocious, Caroline Guitar Company, and many more—The Pedal Movie seeks to answer the question: “How did pedals get so big?”

“The initial inspiration for The Pedal Movie was us asking how this strange little pocket of the music world grew into this massive community, with new pedals and companies continuously entering the fold,” said Dan Orkin, co-director of The Pedal Movie. “Today, there are thousands of builders churning out hundreds of thousands of pedals every year to an ever-growing community of music makers always on the lookout for new ways to express themselves. There are endless possibilities thanks to the pedals that exist today and those not yet created. There’s never been a more exciting time to make music.”

Sponsored Links from Across the Internet
Show Comments
Related Articles
Metal Gear 0
Sales of Musical Instruments and Gear Spike During Coronavirus Lockdown
May 8th, 2020 at 10:08am Vince Neilstein

Now’s your chance to own a piece of Megadeth history, with items from Ibanez, Laney, Tagima and more available.

The iconic guitarist has partnered up with Reverb to sell off gear used on albums and tours throughout his career.