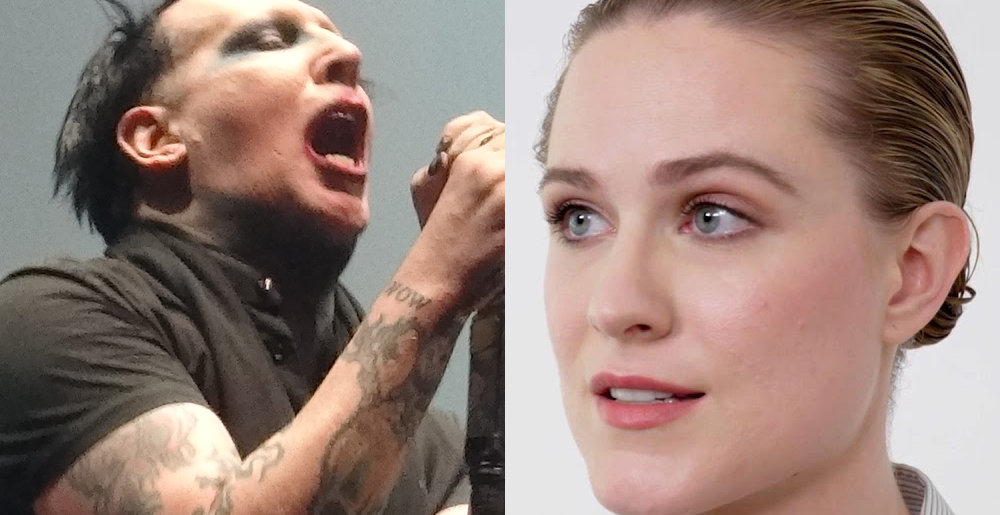 The allegation was made in court documents attorneys for Wood filed in April as part of the Westworld star’s ongoing custody battle with her ex-husband, actor Jamie Bell (Rocketman).

In February, Wood alleged that Manson “horrifically abused me for years.” She elaborated on those accusations a week later, at which point she also said that Manson’s wife, Lindsay Usich, and someone named Leslee Lane were “conspiring to release photos of me when I was UNDERAGE, after being given large amounts of drugs and alcohol, after Brian performed on Halloween in Las Vegas, to ‘ruin my career’ and ‘shut me up.’”

Wood says she “‘took his threat[s] seriously, then and now,” and has installed bullet proof glass windows, a steel door, and a security fence around her home in Los Angeles. She ultimately relocated to Nashville, she says to put distance between Jack and Manson. Bell has argued the move’s actual purpose to was to keep him from his son.

“I am extremely afraid of the alleged offender [Manson]. I have suffered severe, traumatic physical and emotional injury at his hands, and I am afraid he will seek retribution against me for testifying by harming me, our son, and members of my family.

“In my experience, the alleged offender is very retaliatory and has always made it clear that he will ruin my life.”

Elsewhere in the filing, Wood claims that one of Manson’s other alleged victims has recordings of the shock rocker saying he has obtained her children’s social security numbers and photos of them going to their mailbox. “I’ve got everything, they’re fucked, and they’re going to be fucking destroyed,” Manson allegedly says on that recording. “I know where they live, where their fucking kids go to school, where they work, their parents…”

Wood also details the onslaught of death threats she has received from Manson fans since first leveling her allegations against him earlier this year. These include such messages as “You take Manson from me, I’ll take your life,” “We know where you fucking live,” and “I’m about crazy enough to come kill you myself.”

In a counter-filing, Bell says that Wood’s “story defies credibility”:

“I frankly do not understand what is happening. Either Evan’s claims that she is receiving ‘death threats’ are true and Jack is not safe in her care, or they are not true and she is withholding our son from me for other reasons of her own invention.”

Wood’s initial allegations commenced an avalanche of similar accusations from other women, including Game of Thrones actress Esmé Bianco, model/actress Ashley Morgan Smithline and a Jane Doe, all of whom sued Manson. Manson called the accusations against him “horrible distortions of reality,” but the singer was dropped by his label, Loma Vista, his agency, CAA, and his manager of 25 years, Tony Ciulla. He was also fired from television roles on the programs American Gods and Creepshow.

In July, a lawyer for Manson continued to deny the claims, asserting that Bianco and others were co-conspirators “trying to conflate the imagery and artistry of Warner’s ‘shock rock’ stage persona … with fabricated accounts of abuse.” But earlier this month, Manson’s attorney stated that the vocalist is open to a “global mediation” (i.e., a mass settlement with all of his alleged victims).

In August, Manson made his first public appearance since his the deluge of allegations against him began, joining Kanye West on stage at an event promoting the rapper’s new album, Donda. Manson also lent his voice to that record and is now ostensibly pursuing a conversion to Christianity with Kanye’s lead.

As a result of Manson’s contributions to Donda, he scored two Grammy nominations last month, in the Album of the Year category and in the Best Rap Song category (for the Donda cut “Jail”). At the time, Harvey Mason Jr., CEO of The Recording Academy (a.k.a. “The People Who Give Out the Grammys”), defended Manson’s nominations, declaring that “We won’t restrict the people who can submit their material for consideration. We won’t look back at people’s history, we won’t look at their criminal record.” But Manson’s Best Rap Song nomination has since been rescinded, supposedly due the singer being improperly credited as one of the songwriters of “Jail” (he remains credited on the near-identical “Jail, Pt. 2”).

Amidst all the Grammy controversy, the Los Angeles County Sheriff’s department raided Manson’s West Hollywood home, where they reportedly “seized media storage units, including hard drives, which will be reviewed before the case is submitted to the Los Angeles County District Attorney.” Manson is said not to have been home at the time of the raid.