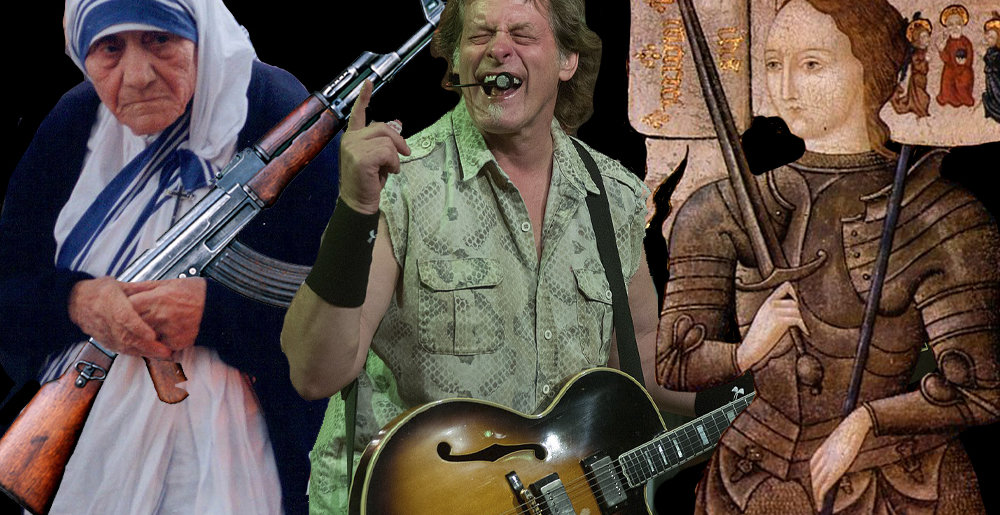 Ted Nugent Doesn’t Know Who Joan of Arc Was

Ted Nugent has released his bi-weekly reminder that he is not an educated man, this time by invoking Joan of Arc in a context which suggests that he is unfamiliar with Joan of Arc.

After repeating, for what must be the eight billionth time, the lie that the First Amendment allows anyone to say anything anywhere at anytime without consequence (“Boy, does Big Tech crush the First Amendment!”), Nugent went on to complain that his wife, Shemane, has been kicked off Twitter:

“Twitter has kicked off Shemane. She’s like Mother Teresa, Joan of Arc. She’s the greatest, sweetest, harmless woman that ever walked the earth…”

Nugent’s statement ought to give you pause before you even read the second half of the sentence… and not just because of his grammatical gymnastics (“She’s the harmless woman that ever walked the earth”).

No, what should actually jump out at you is that he just defined Joan of Arc, a famous MILITARY LEADER, as “sweet” and “harmless.”

In fact, had Joan of Arc been harmless, she would have been categorically ineffective as a soldier, and we’d probably all be as ignorant of her existence as Nugent seems to be.

Furthermore, it’s hard not to read misogynistic subtext into Nugent’s misclassification. Joan of Arc was a woman and a saint, so she must have been an even-tempered pacifist like Mother Teresa… right? Because for what other manner of achievement might a woman be known… right???

I’d also wager that Nugent is unaware Joan of Arc was eventually found guilty of heresy and burned alive at the stake. Which is too bad, because knowing that would have enabled him to make the wholly ridiculous claim that Shemane and Joan are both holy martyrs.

ANYWAY, in case you’re wondering, here’s the ridiculous second half of Nugent’s assertion:

“…and she’s kicked off Twitter because she said something positive about Donald Trump — inconsequential; just a compliment.”

In fact, Shemane Nugent was suspended from Twitter for violating the service’s rules against platform manipulation and spam, which the company defines “as using Twitter to engage in bulk, aggressive, or deceptive activity that misleads others and/or disrupts their experience.”

Although there is no public information regarding how Shemane specifically disobeyed the policy, she claims it was the result of a “joke” she made about Donald Trump having actually won the election.

In other words, she got kicked off for spreading misinformation. Just like Mother Teresa!

Metal Sucks Greatest Hits
2760 -
Who Are The Top Ten Lyricists?
0 -
Rammstein Members Kiss During Moscow Show, Violating Russia’s Anti-LGBTQ Laws
0 -
Paul Di’Anno: Still a Winner
0 -
The formula 4 good music: Generic, but with a gimmick (*please read*)
540 -
Worst Year Ever: All of Our 2010 Year-End Sh*t in One Place
0 -
MetalSucks Readers Declare Pantera The Most Unnecessarily Shat Upon Band in Metal!!!