Metal Sucks
Metal Sucks Accused Rapist Marilyn Manson Is Hard At Work On Kanye... Candy’s Guitarist Got Hit By a Car, GoFundMe Launched
- Tweet SHARE
Enlarge
...And F*ck You Too 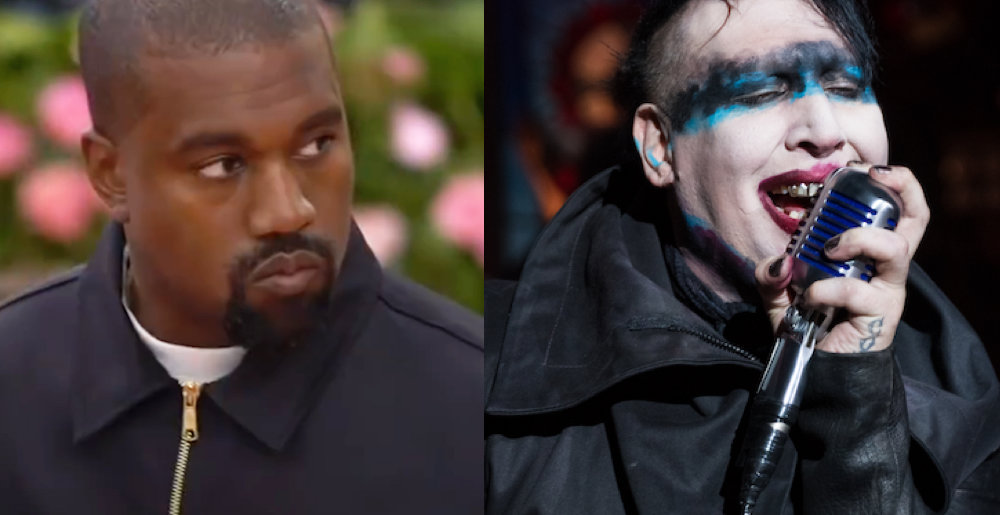 Kanye by Cosmopolitan UK, Manson by Andreas Lawen. Via Wikipedia.

Last we heard about alleged serial abuser Marilyn Manson was when he was accused of raping his then-girlfriend Evan Rachel Wood on the set of his video for “Heart Shapes Glasses,” a claim that Manson’s attorney has since denied. But according to Digital Nas, producer for rapper and Manson collaborator Kanye West, Manson is just such a hard-working guy, how can we focus on anything other than his amazing productivity?

As reported by Rolling Stone, Digital Nas recently talked up his goth-rock partner, claiming that he’s been hard at work on the sequel to last year’s Donda. According to one of Manson’s reps, the guy really “enjoyed collaborating with Ye on Donda and looks forward to working with him again.”

“I see Marilyn a lot in the studio,. Like, every day I go to the studio, Marilyn is there working on Donda 2.

Oh, good. We’re so glad to hear that Manson is throwing himself into the process. After all, with all his social obligations, he…oh, right. Well, I bet his label wants him to…right, got dropped from his label, right, right. Well, he could easily be spending all his time at home…right, home raided in conjunction with sexual assault allegations against him.

Well, sounds like Donda 2 is all Manson really has. And hey, the first Donda got him two Grammy nominations, for some fucking reason, so who knows, maybe this is his chance to redeem himself. Hard maybe, obviously.