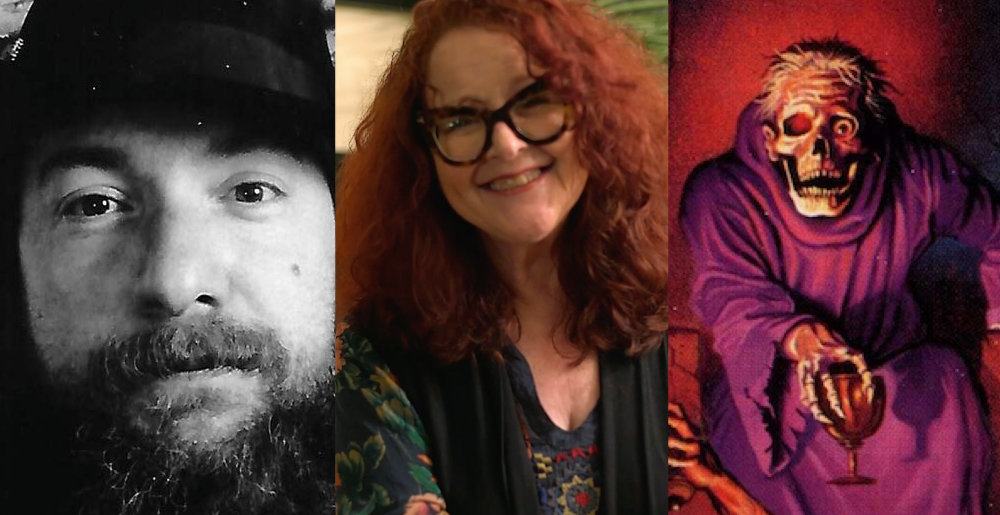 Yesterday, the metal world was heartbroken to learn that Jon Zazula, the co-founder of Megaforce Records who discovered Metallica in their early years, had died at 69. For metalheads, Zazula and Megaforce were institutions that changed our culture as we know it. But for those outside of our world, Zazula was one of many people whose legacy had to be researched to be respected. He was vital to metal, and even rock music at large…but he was a name, not a face. A lot of people didn’t know who he was until yesterday.

The truth is that there are so many people who have dedicated their lives and talents to metal who you couldn’t pick out of a line-up. These are the hard workers who rarely if ever hear any applause for their toil, who spend their time making the phone calls, turning the dials, and cropping the photos that give metal the epic legacy it deserves. So in honor of Jonny Z and all those like him, we decided to list 12 individuals who you may have only heard of in passing, but whose impact on this music will live forever.

Even without his work with Metallica, Jon Zazula would be a metal legend. With Rock and Roll Heaven in East Brunswick, Jon brought metal to the blue-collar kids of the East Coast. With Megaforce Records, he breathed life into a gritty side of thrash metal that helped define the genre. Then, of course, there’s the demo and two albums he put out with Metallica, which led to them becoming the biggest band on earth. Everyone who’s ever loved a fast galloping riff should pour one out for Jonny Z tonight.

So much of black metal as it’s ideally remembered comes from the words and photos of Jon Kristiansen, AKA Metalion. As the writer, editor, artist and photographer for Scandinavian metal zine Slayer Mag, Metalion documented one of the genre’s most obscure and infamous subcultures as it was unfolding, which is the metal journalist equivalent of finding an undocumented tribe in the Amazon. That the whole thing devolved into madness and murder makes his timeless lo-fi work even more impressive and sacred.

For British music fans, John Peel is famous on a large scale, having promoted everything from early dub to electronica to British hip-hop via his infamous ‘Peel Sessions’ in-studio concerts. But among the bands Peel recorded and promoted were Extreme Noise Terror, Carcass and Napalm Death, the founders of grindcore who grew out of suburban England in the ‘80s. Peel’s promotion of these bands was vital to underground metal, pushing forward the arms race of sonic extremity. Our ear drums will hate him ’til the day we die.

Rock stars need sex, drugs, unlimited excess – and soup. That’s perhaps the sweetest moment in the documentary The Rainbow about infamous Sunset Strip metal hangout The Rainbow Bar and Grill – Lita Ford talking about how owner Mario Maglieri would feed these down-and-out rockers a bowl of soup if they felt sick on tour. Without The Rainbow, many of the Strip’s finest would’ve withered away or gone terribly sober, and without the Mario and his family, there would be no Rainbow. Somewhere, Mario and Lemmy are sharing a drink, as it should be.

You’ve probably listened to Melissa Cross’ handiwork at some point today. As a vocal coach to extreme metal and hardcore’s biggest names – Disturbed’s David Draiman, Arch Enemy’s Angela Gossow, Lamb of God’s Randy Blythe, Cradle of Filth’s Dani Filth – Melissa has touched the voices that destroy our ears all day long. More importantly, she has preserved them, by teaching metal’s harsh, guttural singers to unleash hellish noises while keeping their vocal cords safe. Behind every long-lasting metal howl is Melissa keeping the blood out of its maker’s throat.

We could count the ways we love Floridan producer Scott Burns, but let’s just name a few of his accomplishments. Every Cannibal Corpse album through 1996’s Vile. Deicide’s first four albums. Death’s Lerosy, Spiritual Healing, Human and Individual Thought Patterns. Sepultura’s Arise. The first five Obituary albums. Suffocation’s Effigy – oh, you got it? Do we need to keep going? Is…is it clear that death metal simply would not be without Scott Burns? Yeah? Cool, good talk.

There is a style of art that we inherently associate with heavy metal album sleeves, and Ed Repka pretty much perfected it. With covers including Megadeth’s Peace Sells and Rust In Peace, Death’s Scream Bloody Gore, and Nuclear Assault’s Game Over under Ed’s belt, it’s pretty clear that thrash’s lush-yet-cartoonish feel owes pretty much everything to the dude. And he even did it a second time, with his covers for Municipal Waste’s Hazardous Mutation and Toxic Holocaust’s Hell On Earth helping define thrash’s comeback movement. Need a sewer mutant surfing a mushroom cloud to make you laugh at your own mortality? Repka’s got you covered.

Maybe behind the scenes isn’t entirely accurate for Jose Mangin. The dude has become incredibly recognizable within the upper crust of the underground, grinning next to metal stars like Jamey Jasta and Chuck Billy. But behind every wide-eyed photo you’ve seen of Jose are countless hours of hard work and support for the scene. Just because he loves the shit out of his job doesn’t mean it hasn’t been a job, and the guy’s constant hustle is a lesson to all metal fans looking to make this life their nine-to-five.

So obviously, Penelope Spheeris directed Wayne’s World, thus coining the archetype of the good-natured heavy metal dude who really just came here to party. But she also directed The Decline of the Western Civilization Pt. II: The Metal Years, which definitively documented the excess of the hairy 1980s and the comet of thrash that was about to collide with the scene and kill all the dinosaurs. Though many might think of her as the woman who made Schwing a household term, Penelope really gave metal the identities it needed to survive its gross peak and scary lull. We owe her for that and then some.

Metal’s global womb has always been especially fertile in the UK, and under Phil Alexander’s guidance, it spawned beautiful monsters. As one of the most vital guiding minds behind Kerrang! Magazine, Phil helped build the burgeoning British rock and metal scene from a scrappy body of hard drinkers to a vibrant, perpetually-changing body of, uh, hard drinkers. Phil’s dedication to bringing fans the breathless excitement they hopelessly crave has made him one of the rock and metal media’s most trustworthy voices. If you see him, go talk to him about Motörhead.

Why the fuck isn’t Paul Booth appearing on every TV special or cultural examination about metal? Because he’s too much of a fucking metalhead for it. Though his work adorns the bodies and album covers of many of metal’s sickest figures, Paul is as dark and secretive as the smirking demons he draws. But for that reason, he will not only be one of metal’s most important visual artists, but also a dude that misanthropes like us can relate to. You don’t create art this evil in direct sunlight.

While it’s a tough call, one could argue that there is no person on this list more vital to metal’s legacy than Brian Slagel. As the founder of Metal Blade Records, Brian blew them all up — Slayer, Cannibal Corpse, Amon Amarth, The Black Dahlia Murder, even the Goo Goo Dolls. From sealing envelopes in his tape-trading youth to running the show all these years later, Brian’s tireless dedication to putting killer metal music in your hands and ears has changed everything we say and do as metalheads. Just don’t get him started on hockey or you’ll lose an afternoon.

One of the new tracks will be a studio version of “The Jackal of Salzburg.”

Metal Legacies 0
Metallica Attempts to Turn Back the Clock in Pro-Shot Footage of “Phantom Lord” from the Zazula Tribute Show
November 9th, 2022 at 4:44pm Hesher Keenan

FALL TO YOUR KNEES!!!

Hell of a setlist.