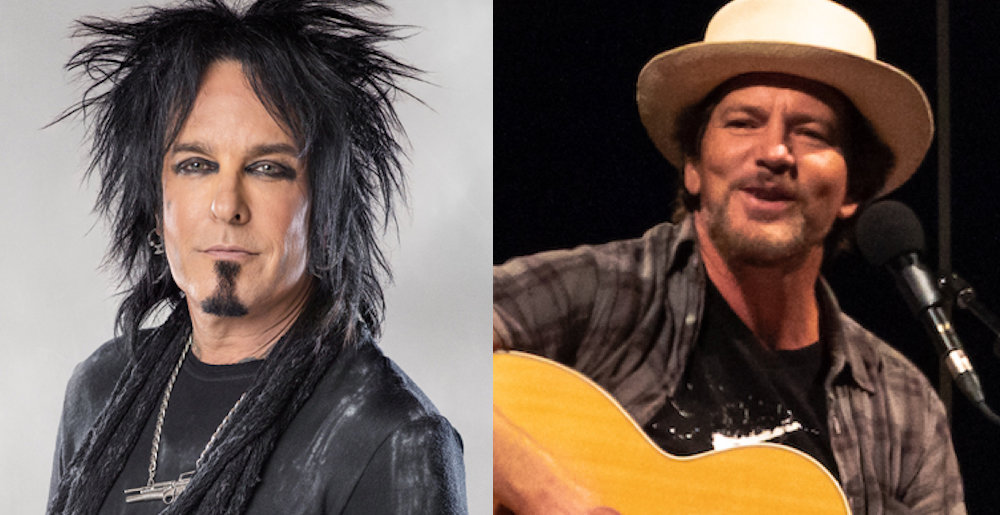 Eddie Vedder Says He “Despised” Mötley Crüe, Nikki Sixx Calls Pearl Jam “One of the Most Boring Bands In History”

Maybe it’s because of how long the pandemic’s gone on, but man, it seems like every hard rock and metal star on earth has decided to pick a fight this month. You got David Draiman and Sebastian Bach arguing, you got Corey Taylor and Machine Gun Kelly cat-fighting, you got Chris Barnes hazily taking swings any passing bystander, and now you got Pearl Jam‘s Eddie Vedder and Mötley Crüe‘s Nikki Sixx feuding because the former hated the latter’s band.

Vedder was talking to The New York Times, and the change between ’80s and ’90s rock culture came up, and Vedder said the following:

“You know, I used to work in San Diego loading gear at a club. I’d end up being at shows that I wouldn’t have chosen to go to — bands that monopolized late-’80s MTV. The metal bands that — I’m trying to be nice — I despised. ‘Girls, Girls, Girls’ and Mötley Crüe: [expletive] you. I hated it. I hated how it made the fellas look. I hated how it made the women look. It felt so vacuous.

“Guns N’ Roses came out and, thank God, at least had some teeth. But I’m circling back to say that one thing that I appreciated was that in Seattle and the alternative crowd, the girls could wear their combat boots and sweaters, and their hair looked like Cat Power’s and not Heather Locklear’s — nothing against her. They weren’t selling themselves short. They could have an opinion and be respected. I think that’s a change that lasted. It sounds so trite, but before then it was bustiers. The only person who wore a bustier in the ’90s that I could appreciate was Perry Farrell.”

To which we say…well, yeah. Of course Eddie Vedder hated hair metal! Of course he loathed Mötley Crüe and how they talked about women. Every generation looks at the stupid-ass one that came before them and thinks, Fuck you, and that’s especially true with the vulnerable alt-rockers of the ’90s looking back at the gross glam bands of the ’80s.

Of course, Nikki Sixx had to say his piece, so he tweeted this:

“Made me laugh today reading how much the singer in Pearl Jam hated @MotleyCrue. Now considering that they’re one of the most boring bands in history it’s kind of a compliment isn’t it?”

To which we say…well, yeah! Of course Nikki Sixx thinks Pearl Jam sucks. That’s what the ’80s hair bands had against the ’90s bands — they put on a big, exciting show and had kickass solos, and weren’t a bunch of hunched-shoulders kids in sweaters mumbling about being boring.

In conclusion, this is some softball feuding, but hey, both Pearl Jam and Mötley Crüe have remained huge past their genres’ big heydays, so maybe it’ll evolve into something public and stupid!

Metal Sucks Greatest Hits
0 -
Report: “The Number of Heavy Metal Bands in a Given Country is Associated with its Wealth and Affluence”
560 -
The Austerity Program’s Justin Foley Wonders: Is It Okay to Listen to Music Made by People Who You Think Are Bad Folks?
0 -
Has Moshing Turned Into a Form of Bullying?
8790 -
The Top 39 Annoying Things That (Local) Bands Do
0 -
Scientific Proof That Djent is a Genre
0 -
Exclusive Interview: Lamb Of God Drummer Chris Adler on Randy Blythe’s Imprisonment, Upcoming Tour and the Future of the Band