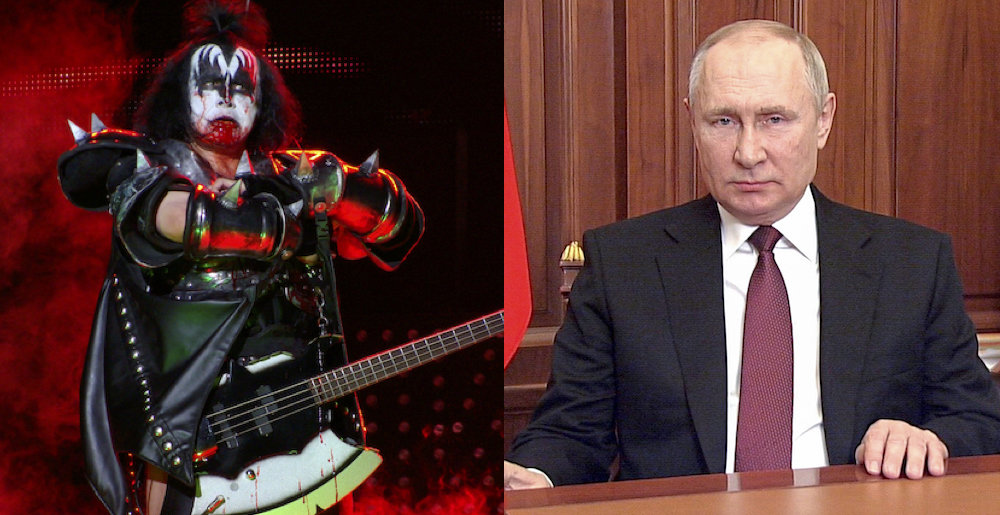 You’d think that a merciless, oligarchical dictator would be the kind of guy that KISS‘s Gene Simmons would get behind. The dude was such a buddy of Trump, and it feels like Trump stared at a picture of Vladimir Putin every night, missing him and lamenting his inability to just poison whoever the fuck he wants. But now, Russia’s invasion of the Ukraine has angered even Mr. Simmons, leading him to speak out against Putin in a series of tweets.

Simmons took to his Twitter to express his anger at Putin’s portrayal of the Ukrainian prime minister as a Nazi, which has been a recurring

The outright lie from Mr Putin accusing @Ukrain PM Zelensky of being a Nazi is stunning, considering that PM Zelensky is actually Jewish and lost his entire family to Nazi Germany during WWII.

As noted by The Pit, Gene also tweeted his support for Ukraine this Sunday, posting:

Our prayers and support go out to the brave people of @Ukraine…..Former Ukraine president confirms the ‘Ghost of Kyiv’ is real!

So, Putin? Gene Simmons hates you. Gene “Rock Stars Should Stay Out of Politics, Gold Nugget Magalomaniac” Simmons thinks you’re an asshole. If there was ever a sign that you should back off, it’s that the Demon has somehow overlooked your money and power and decided that you look like a bouquet of wangs. Way to go.

Check out the tweets below.

Metal Sucks Greatest Hits
0 -
MetalSucks Readers Declare Pantera The Most Unnecessarily Shat Upon Band in Metal!!!
0 -
Let’s Gossip About How Much Money Famous Metal Vocalists Make
0 -
G.O.A.T. and Your M.O.M.’s “Quack like a Duck” Justifies Humanity’s Entire Existence
0 -
Rigged: Luc Lemay of Gorguts
0 -
Twenty Hard Rock and Heavy Metal Celebs’ Mugshots
0 -
What Will Happen When a Member of Metallica Dies?