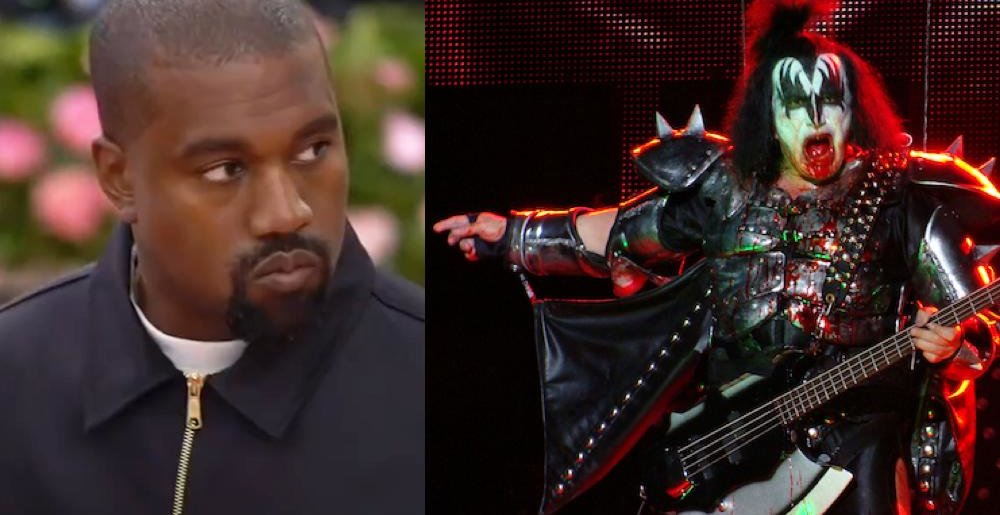 Kanye by Cosmopolitan UK via Wikipedia. Gene Simmons by Alberto Cabello via Flickr.

Gene Simmons: Kanye West Is “Out of His Mind,” Might Get “Bitchslapped”

In general, we consider KISS frontman Gene Simmons to be wack as fuck. The guy is always weighing in with his rich rock-star opinion about topics he only sometimes understands (remember when he got angry at Katy Perry for being political and the only artists he could think of were himself, her, and Chubby Checker?). But Gene Simmons hating on rapper Kanye West actually feels appropriate, because both artists are on the same level in terms of fame and unhinged, delusional rants. And Gene’s new take on Kanye’s recent harassment of his ex-wife Kim Kardashian and her new boyfriend Pete Davidson is actually kind of wholesome, in a rich-people-who-think-they-know-what’s-best-for-everyone kind of way.

Offering his thoughts on the celebrity story when approached by TMZ at a Los Angeles cafe, Gene tossed in his two cents (as transcribed by Blabbermouth):

“For the record, [Kanye’s] a talented guy. There’s no question about it. He’s out of his mind… This is your wife, the mother of your children. It’s not childish. There’s something clinically wrong with him, as he’s admitted.”

When asked whether or not Kim and Pete needed a restraining order against the rapper, Gene waved off the idea:

“You don’t need to do that. Pete’s a cool guy [who] takes the high road. Just ignore it. At a certain point, if everybody misbehaves, they get bitchslapped…

“It’s, like, guy, you’ve got a roof over your head, you’ve got food in your tummy. You can do whatever you want. Get a hobby. That’s better. Leave him alone. Move on. Love your kids. Love the mother of your kids and let her make her own decision. She’s a grown-ass woman now and she doesn’t need your permission.”

That’s a surprisingly progressive opinion! Then again, Kim Kardashian is a billionaire, so obviously Gene respects her.

Watch video of the interaction here: