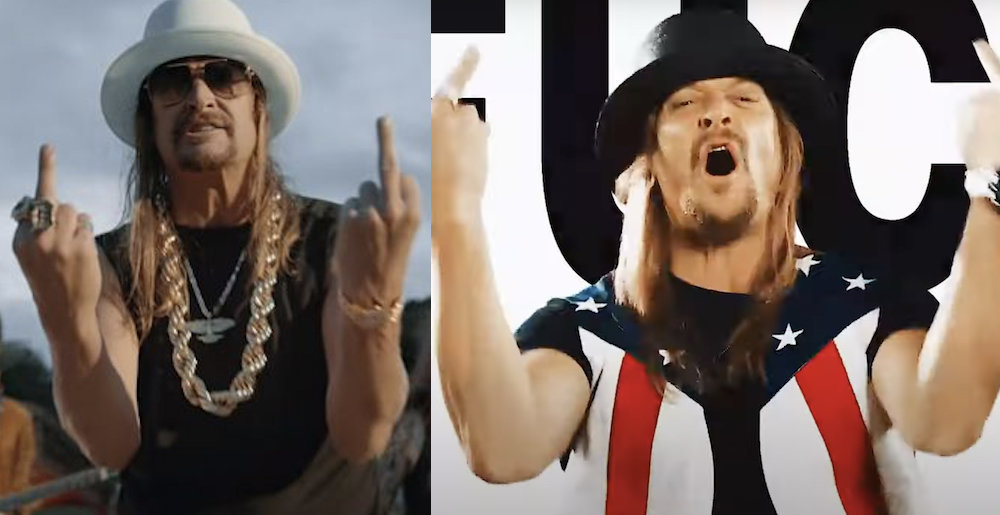 Kid Rock Is So Unoriginal, He Made the Same Bad Music Video All Over Again

Last year, aging rap-rocker Kid Rock released a music video for his song with Canadian rockers Monster Truck, titled “Don’t Tell Me How to Live.” The video was a poorly-made conservative meme that made Kid Rock look like a dad on Facebook from five years ago; Kid Rock would later go on to act as though his critics and enemies were offended by it, when in fact we just pitied him. Now, Kid Rock has released a video for his other poorly-made front-seat-of-truck-wearing-wrap-arounds-rant “We The People,” and WOW, it’s just the same video!

As you’ll see in the footage below, Kid Rock seems to go out of his way to reuse every single part of the “Don’t Tell Me How to Live” video in his video for “We The People.” Weird pixellated shots over newsroom stock footage? He’s got it! Double middle fingers as an emphasis over terribly-displayed lyrics? It’s in there. Random shots of liberal media figures he dislikes on face value rather than the actual people conservatives should be mad about? Here in spades! It’s as though Kid Rock had to make a music video for this song, and tried to come up with an idea, and then was like, Fuck it, we’ll just do the last thing again. Holy shit, I’m almost certain that’s exactly what happened.

The best part is, of course, when he says “it’s time for love and unity” after flipping everyone off and shortly before telling them to suck “deez nuts.” With this, Kid Rock really shows off the most unoriginal conservative tactic of them all: acting like a tough guy, and then whining about why people are so divided when listeners answer him with a ‘Screw you.’ Guess the guy can dish it out, but can’t take a middle finger himself.

Watch “We The People” below, but if you’ve watched “Don’t Tell Me How to Live,” don’t bother.