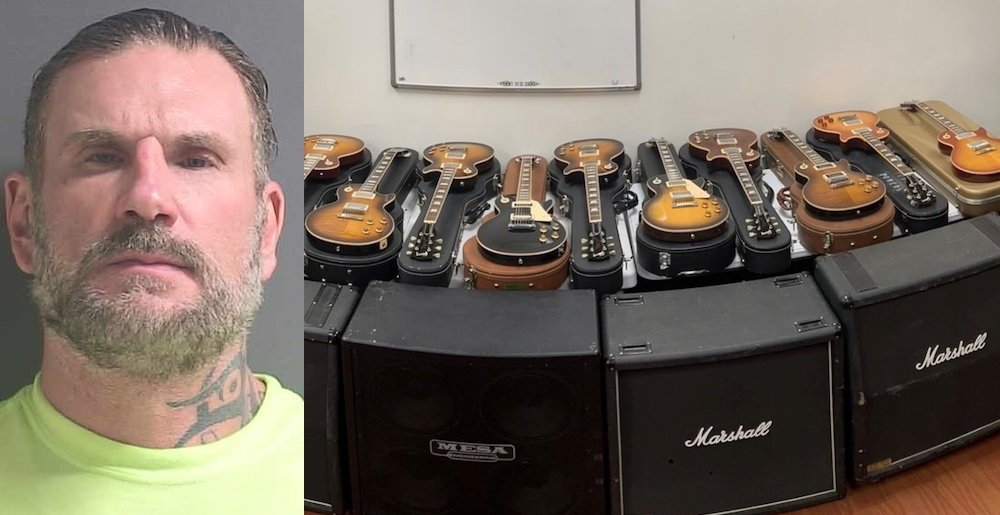 We write a lot about big bands and celebrities here at MetalSucks, and how their rock star lifestyles allow them to do whatever they want. But what about the little guy down on the street — what’s he doing? And if he’s in Florida, what utterly insane shit is he up to now? Well, according to a news report out of Volusia County, Florida, your everyday Florida rock fan is out there buying shitloads of gear using a stolen credit card.

According to Music Radar, back in 2019 a 49-year-old Florida man who goes by the name of Mystery Shiloh Demarest decided to go on a gear-buying spree with the credit card of the 78-year-old woman he lives with, who gives it to him to do shopping and run errands while she tends to her sick husband. But this time around, Mystery decided to spend $17,000 to buy the following list of items.

GOTTA love the plane ticket! I mean, the gear is one thing — maybe he’s buying all of this stuff for the kids down at the orphanage, who knows? — but throw the plane ticket in there and you officially have either a hardened criminal or a dude who’s on the phone with the bandmates who just touched down in Europe, insisting that the tour is still on.

Anyway, according to the Volusia Country Sheriff’s Office, via Ultimate Guitar:

“Demarest explained his girlfriend must be responsible, and he’d return everything for a refund. The victim believed Demarest, but then lost contact with him.” However, not long after that, other expenses appeared on the card, including Extra Space Storage in DeLand, a plane ticket, and a hotel room reservation. They also add that “when the victim checked on the storage unit, she discovered the rent was past due and the unit had gone up for auction online.”

Demarest is still at large, so if you see the dude in the header bumming around your local Guitar Center, drop a dime.

Sponsored Links from Across the Internet
Show Comments
Related Articles
Editorials 0
Florida Man Dresses as Grim Reaper to Protest Beach Reopenings
May 3rd, 2020 at 10:01am MetalSucks

The man is a lawyer seeking to call attention to the dangers of reopening the state’s economy too soon.

Appalachian Death Trap’s songs tell the stories of four older women who have been divorced or widowed and are now roommates.

Shove the Sunshine State where the sun don’t shine.

Metal Sucks Greatest Hits
0 -
Deicide’s Glen Benton Sells Out, Tells Fans to Stop Moshing So Violently
0 -
Unearth are the Slayer of Metalcore
0 -
Hallowed Be Thy Game: Brütal Legend is a Love Letter to Heavy Metal
0 -
Just in Time for Passover: Big Four Yarmulkes?!?!
1230 -
Loutallica’s LuLu: The MetalSucks Reviews
2760 -
Who Are The Top Ten Lyricists?