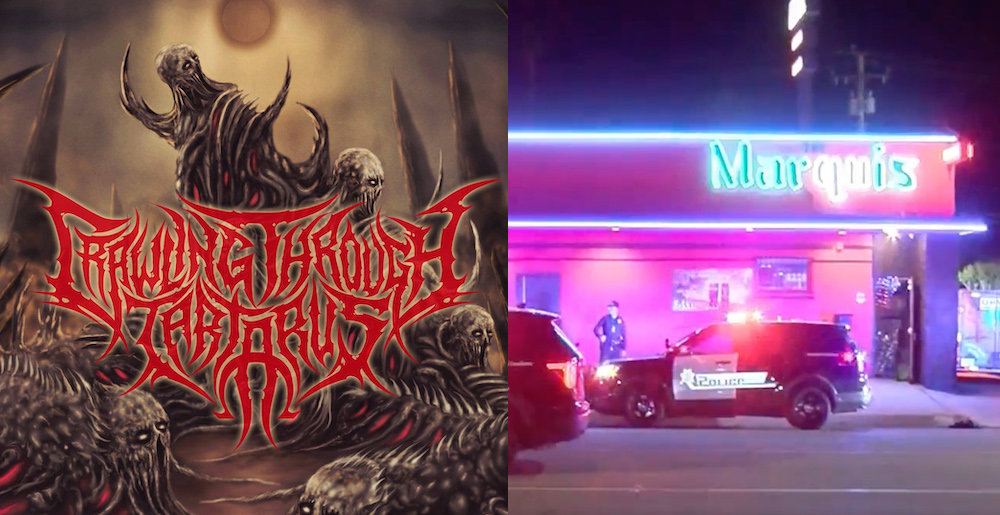 One Dead, Four Injured In Shooting at Death Metal Show

According to NBC Los Angeles, a shooting at a death metal show in San Bernadino this Saturday left one dead and four injured.

The shooting took place around 9:30pm at the Marquis Lounge at 1036 W. Highland Avenue in San Bernardino. When police arrived at the scene, they found one person already dead, and three other people suffering from gunshot-related injuries. A fourth victim with a gunshot wound drove to the hospital on his own (damn, hardcore), making for a total of five shooting victims overall.

As reported by Blabbermouth, the show at which the senseless act took place was that of Los Angeles death metallers Crawling Through Tartarus, whose vocalist Matt Holzboog was hit by two bullets and eventually had to undergo surgery. Meanwhile, CBS Los Angeles identified the deceased victim as 32-year-old James Vincent Dickson.

It has also been reported that as of Monday, all victims of the shooting are in stable condition.

The investigation of the shooting is underway, with no suspects of possible motives currently available.

Matt Berg, a friend of the band, posted the below images to Facebook, including as picture of Holzboog in the hospital, writing:

“Prayers for my boys in Crawling Through Tartarus after a violent shooting during their set last night in San Bernardino. Zander Dixon was a brother to Jack Berg and me growing up and it’s terrifying to see the video of somebody opening fire. Their vocalist Matt was hit by two rounds and is dealing with surgeries now. Make sure you send lots of love their way. Share their music with your friends, buy some merch, wish them well etc.”

That’s super fucking scary for all involved, and we wish Matt and his bandmates all the best. Check out the band below — while it doesn’t necessarily matter that their shit is cool as hell, it’s certainly nice to find out.

It was slated to be their final show in New Zealand ever.

A mass shooter opened up fire at the Route 91 Harvest Festival in Las Vegas leaving over 50 dead and more than 400 wounded.