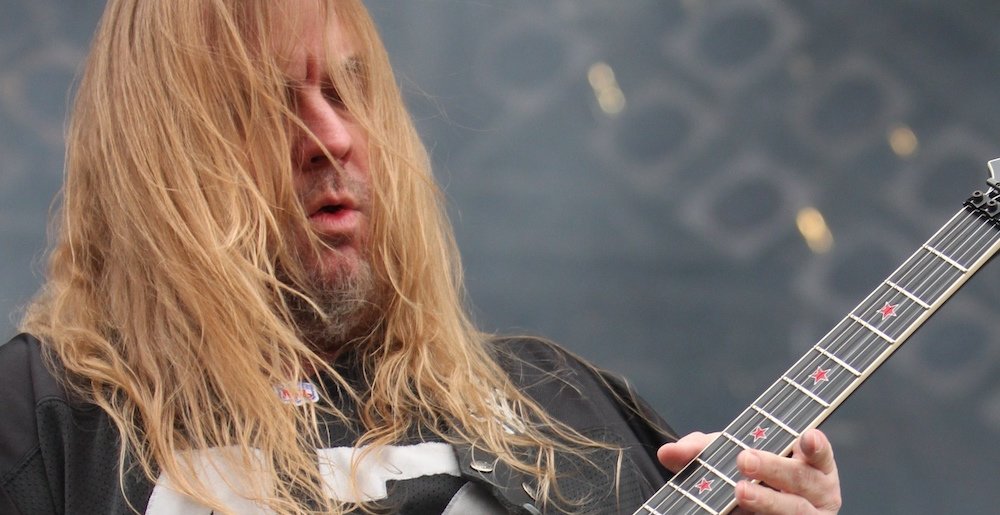 Photo by Kyle Bunkin via Wikipedia.

March On Through the Rivers of Red: Remembering Jeff Hanneman Nine Years Later

These days, Slayer sometimes feel little comfortable. The band have become the symbol for a different kind of metalhead than they used to, an arms-crossed metal dad whose abrasive personal and political stances stand in opposition to feeling anything. With Metallica on the world stage, Anthrax a little too fun and focused on open-mindedness, and Megadeth couched in some American Christian bullshit, Slayer has become the refuge of a biker-ish family of loudly-offensive fans with hundred-foot walls raised around their hearts. Fuck ‘em all, right, brother?

But something this seems to lose if the soul of Jeff Hanneman, Slayer’s founding guitarist who died this day in 2013. Jeff was a beer-chugging loudmouth, to be sure, but he was also a punk at heart, and his attitude, behavior, and musical input in Slayer felt firmly couched in saying ‘fuck this’ at anyone selling ease and comfort. Now, nine years after his death, as a new generation of metal fans perceives Slayer in a different light, it’s good to remember the dude for being a rebel among rebels, a musician who was here to play and nothing else.

It’s telling that Hanneman grew up around warfare – his dad fought in World War II, his brothers in Vietnam. Beside the fact that this would influence Slayer’s riffs and lyrics significantly – Jeff wrote the infamously horrific lyrics to “Angel of Death,” the band’s track about sadistic Nazi doctor Josef Mengele – one can also see how it influenced Jeff’s behavior and approach to the world. Jeff was the guy who brought hardcore punk into the mix, introducing the other dudes in Slayer to acts like GBH and Minor Threat. Unlike metal, which was so often about mastery and powerful forces, hardcore offers a ground-level sense of desperation, integrity, and tangible bloodshed – all recurring themes in Jeff’s material for Slayer.

This also made him less easy as a person. A running theme in the Slayer story is that Jeff wasn’t a social butterfly, and not always a party. The guy was reserved. He was fiercely dedicated to his wife. He didn’t hang out with people he thought were assholes. According to D.X. Ferris in his excellent 33 ⅓ book about Slayer’s Reign In Blood, Jeff was the dude who’d slap a piece of cheese on your face while drunk. There’s a starkness to that, a zombie-apocalypse agitation in response to the niceties of the world. If life is precious and easily lost, why waste it smiling at shitheads?

In Jeff’s music and lyrics, that psychology goes surprisingly deep. It’s easy to think of Hanneman as all fuckin’ Heineken and war medals, but lyrics like the battle-drowned panic of “Die By The Sword” and the morbid overkill of “Postmortem” offer a disjointed mental atmosphere, a glimpse into the human subconscious in all its frenetic glory. Meanwhile, his ‘story’ tracks were forever couched in human weakness and folly: “Behind the Crooked Cross” tells the tale of a Nazi grunt realizing he’s the bad guy, while “Unit 731” showcases the carefully-arranged sense of honor imposed upon Japanese soldiers in the country’s unspeakable torture division. Both show an insight into horror and war beyond the surface level.

This sense of humanity also seems to be what speeded up Hanneman’s decline. After getting necrotizing fasciitis from a spider bite in 2011, Jeff was unable to play in Slayer, and according to accounts from his bandmates and his wife Kathy, began boozing too hard, and refused to seek therapy. This led to the cirrhosis of the liver that inevitably killed him, and echoes a story told by Machine Head’s Robb Flynn in which Jeff cried over pain in his hands and the prospect of being unable to play. For Hanneman, being unable to make music was damning, a severe personal blow. An incredible legacy like his wasn’t enough – it was the battlefield or nothing at all.

On the ninth anniversary of Jeff Hanneman’s death, let’s bristle. Let’s not get pulled into some Good Ol’ Boy bullshit by metalheads who don’t want anyone to see the cracks in their armor. Let’s not suffer fools, including those clapping us on the back like they’re our pals. Honor Jeff Hanneman by being the odd ones out, the ones who truly doesn’t give a fuck about who sees how human we really are. Rip everything open. Let your heart bleed itself dry. Fight ‘til death.

Metal Sucks Greatest Hits
0 -
Video: Vocalist Performs Ten Styles of Metal, Complete with Appropriately Silly Lyrics
0 -
Give a Heavy Metal Valentine’s Day Card to Someone You Love
0 -
Anthrax’s Frank Bello is Really Excited to Be Here, Not at All Concerned About Swallowing Bugs
0 -
Video Footage of Emmure’s Frankie Palmeri Getting Electrocuted On Stage in Russia
0 -
Why are metal fans hopelessly stuck in the past??? :(
0 -
Jack Daniels Releases Single Barrel Whiskey in Honor of Motörhead