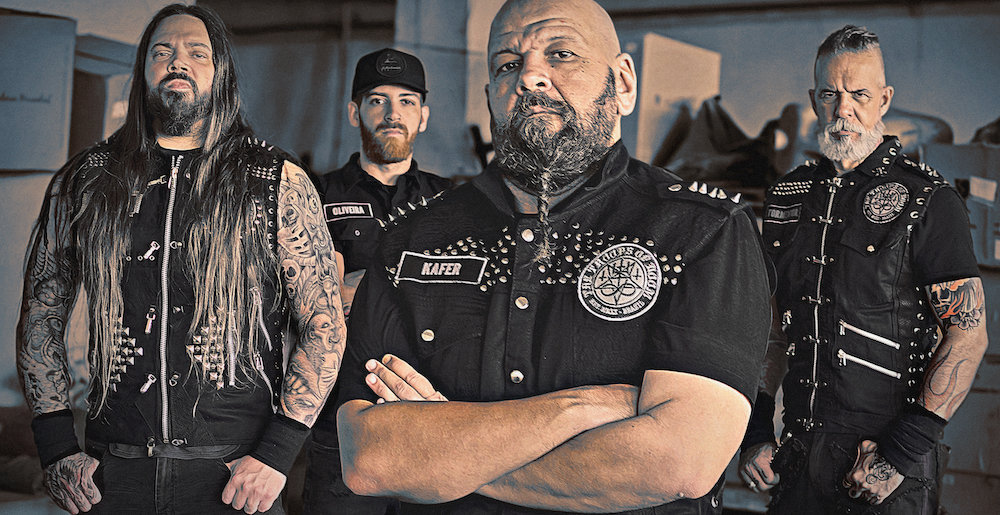 With their name, one might think that Brazil’s The Troops of Doom would be a bunch of sludgy weed worship. But no, it’s a Sepultura reference, because the band includes founding Sep guitarist Jairo “Tormentor” Guedz, and wouldn’t you know it, these dudes play ripping death-thrash that’ll have fans of acts like Vader, Asphyx, and The Crown clawing at their faces in excitement. Now, we have the honor of premiering the video for “Dethroned Messiah” off of the band’s new album Antichrist Reborn. You can watch it below.

“The idea of ​​making a video for the opening song of ‘Antichrist Reborn’ album wasn’t something easy and it brought us a huge responsibility. We had some ideas in mind, I had meetings with the talented director Walter de Andrade to find the best approach for this music video. We also sent him some visual references of what we like to bring aesthetically and what we wouldn’t like to do too. The process was very cool, we obviously sweat and worked hard, but at the end the result was awesome and it’s motive of pride to me! When we were discussing to Walter about the music concept, that’s basically the renunciation of religion and God, we also decided to pay tribute to some horror movies we love, like Evil Dead and The Witch.

“The central subject was to show a woman who moves away from everything and everyone, embracing misanthropy, and then she goes alone to a cabin in the middle of the forest, where she abandon all faith in God and rites of the Christian church, surrendering to black magic and invoking a demon, that shows up in shadow shape. This process leads her to the ‘incubus’ and possession is imminent, transforming the protagonist into a witch who give up of all material goods and surrenders to the evil forces of the forest. The director’s wife, Siddharta, was chosen for the role and the clip was filmed in two stages – one in Belo Horizonte with the entire band in the basement of an old building and another in the countryside of Santa Catarina, in a cabin. We wanted to convey the idea like the band was playing in the basement of that cabin where the witch is, influencing her to bring all that darkness through quotes taken from the lyrics, as a conjuration, while she’s preaching at the same time our vocalist Alex Kafer is singing that words, like an omen.

“We got really excited with the final result and I hope everyone love this video as much as we do.”

Check out the video for “Dethroned Messiah” below. The Troops of Doom’s Antichrist Reborn is out now on Alma Mater Records, the label run by Moonspell frontman Fernando Ribeiro.

Tags: Sepultura, the troops of doom