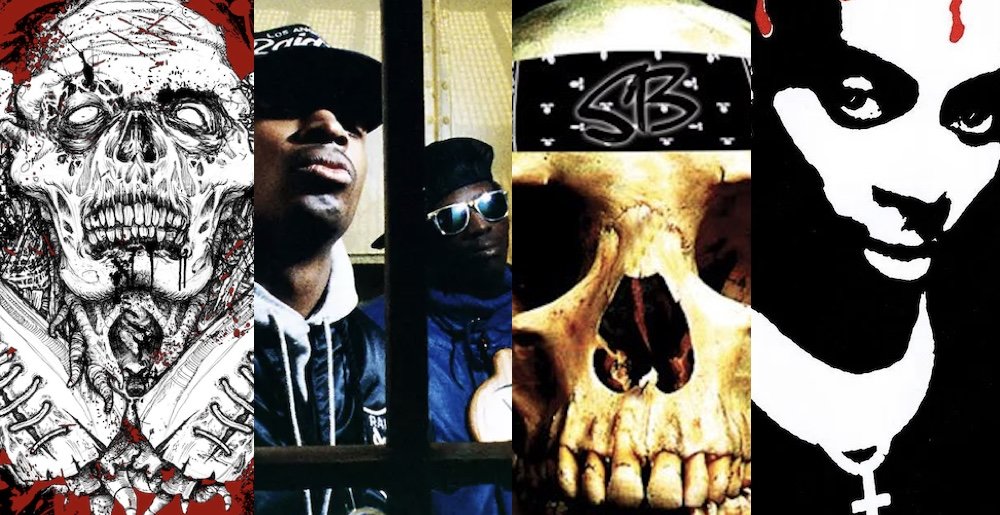 Metal and hip-hop have always had a tenuous relationship. On the one hand, the two genres found kinship with one another in the ’90s, as they were both street-level scenes that blew up without help from the mainstream. But as hip-hop slowly became pop music and metal descended even further underground, a divide grew between them; when nu-metal became everyone’s musical punching bag, it seemed to suggest that combining the two worlds was a bad idea. As of now, the relationship exists on the poles, with nu-metal revivalists claiming rap is the future of metal while the rest of the scene gets pissed at rappers being inducted into the Rock and Roll Hall of Fame.

That said, the hip-hop world has always been aware of metal, with an understanding of its extreme appeal and a respect for the artists who make it without giving a fuck. And while there are certainly rappers who fully embrace morbidity and blasphemy, even more traditional hip-hop artists have tipped their hats to the tattooed masses here and there. Case in pointed, we’ve amassed a list of hip-hop songs that reference specific bands, either in reverence or to take a swipe at them.

Man, this one’s packed. Hip-hop supergroup Slaughterhouse landed hard with “The One,” a single that references countless legendary hard rock and heavy metal musicians. From Royce Da 5’9” saying he wants to have “Rod Stewart cars and Ozzy Osbourne motor skills” to Crooked I claiming, “Something in my denim need a kiss – call it Gene Simmons,” the track is a fun-as-fuck minefield of rock Easter eggs. Definitely a song that’ll bring down the strip club.

To be fair, unlike some of the other dudes on this list, Georgia rapper Playboi Carti only gives the kings of satanic thrash metal a fleeting shout-out. At the beginning of the song, he says, “I’m a rock star, I coulda joined Slayer.” That said, his parody of punk magazine Slash for the cover of Whole Lotta Red along with his inverted cross necklace definitely suggest that the dude knows the band. Also, it’s telling that in 2020, Slayer are big enough to get referenced as modern rock stars. ‘John Mayer’ could’ve also worked, but Carti didn’t go that route, and for that, we thank him.

“Party Like a Rock Star” definitely got in on the whole rappers-loving-on-metal-bands thing a decade before it became part of pop culture. The track is mid-paced, sleazy, and shows off Shop Boyz’s honest-to-goodness desire to rage like the rock royalty of old. Meanwhile, lyrics about tripping with the Osbournes and stanning Travis Barker show how much the crew dug on some tattooed miscreants. A song so good that R. Kelly straight-up ripped it off with Ludacris and Kid Rock a few years later.

Don’t let the jaunty little beat fool you – “Blood In, Blood Out” is one of the more intense rap tracks you’ll find. Lyrics like, “I like anything that’s related to death/I like any king that can reign with his fist” definitely make Philadelphia rapper Vinnie Paz out to be more metal than plenty of his peers. And of course, midway through, Vinnie spits, “We like heavy metal, listening to Sepultura,” making it clear he only appreciates brutal South American thrash. The song’s hardcore homophobia kind of sours the reference, but hey, it’s there.

Most metalheads were probably expecting Tech N9ne to show up on this list. The rapper is close to the metal community, specifically to Slipknot frontman Corey Taylor. That’s exactly who he shouts out in “Like I Ain’t,” and even takes a second to yell, “Maggot!” in the background. The video’s insane-asylum setting, meanwhile, helps complete that classic nu-metal image of squirming madness.

Why just reference a metal band when you can straight-up write their biography in rap form? That’s exactly what Brooklyn’s Ill Bill does with his track “U.B.S.” The song doesn’t shout out moments from Slayer’s career, it straight-up chronicles it, including such facts as the band recording Show No Mercy with no budget and Tom Araya pissing on Cronos from Venom. If you’re looking for an unorthodox take on one of metal’s oldest creation myths, you can do no better. Oh, and the album it’s on is named after a Slayer lyric. Bill ain’t fuckin’ around.

Public Enemy, “Bring Tha Noize” (It Takes a Nation of Millions to Hold Us Back, 1988)

Honestly, “Bring Tha Noize” was pretty rad before thrashers Anthrax got involved, but it wasn’t quite there – a little stark in the beat, a little thin in the middle. Then again, we’ll never really know if that’s true, because Chuck D’s shout-out to Anthrax led to them collaborating on the version of the track that we all know and love. It also led to a tour that forever changed how rap and metal fans regarded one another. Still, cool to know that rap and metal’s earliest and most important collaboration went down due to a shout-out for Public Enemy first and foremost.

Not only is Yelawolf’s heavy metal reference on “Hard White” a funny one, but it also separates him from the rap-rock scene that members of both communities are now jocking so hard. The Shady Records rapper says, “Fuck the critics with a spiked dick, if it can fit barely/They probably think I’m a Limp Bizkit that spits jelly.” This is a smart reference, as countless outsiders probably saw this white dude with tattoos and wondered where his landy, dreadlocked guitarist got to. There’s also a shout out to The Devil Wears Prada, but that might just be the movie.

It’s no secret that Post Malone is a metal fan – the dude collaborated with Ozzy and played beer pong with Gatecreeper. But the shout-out on “Rockstar” is actually a little sadder and more old-school than that. During the song, Post says, “Switch my whip, came back in black/I’m startin’ sayin’ ‘Rest in peace, Bon Scott.’” Plenty of the songs on this list mention a band’s name, but giving an RIP specifically to AC/DC’s later singer? Even we have to admit that shows a great deal of class.

Jesus, what metal band doesn’t Necro reference in “Evil Rules?” The point of the song is seemingly to just call out every single metal bands in existence. Then again, making his diehard love of metal known is what Brooklyn’s own Necro is all about; the cover of Death Rap was illustrated by renowned metal artist Mark Riddick, and the song was later redone with Anthrax’s Scott Ian and then-Megadeth bassist David Ellefson providing accompaniment. This isn’t just a rapper who knows metal, this is a metalhead who raps.

On the one hand, the abuse allegations recently levied against Marilyn Manson make him a divisive figure in modern metal. But Eminem’s reference to him in “The Way I Am” has less to do with shouting out Manson and more to do with America’s tendency to blame artists and art for the shortcomings of parents and teachers when tragedy befalls its youth. “The Way I Am” came hot on the heels of the Columbine shooting, offering an insightful take on the hysteria that followed it. If there’s one thing rap and metal have in common, it’s persecution by ignorant assholes.