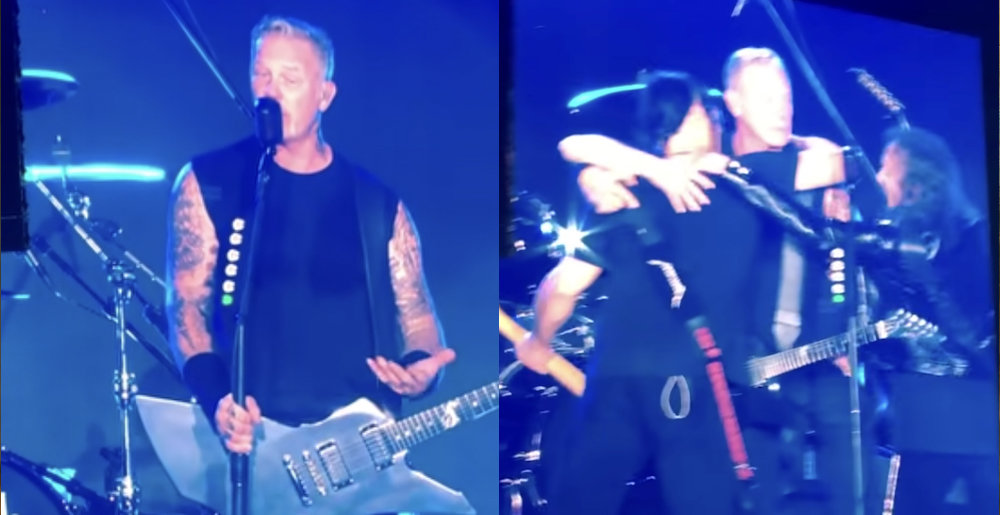 It’s no secret that Metallica frontman James Hetfield wrestles with mental health issues and personal insecurities. Much of the band’s 2004 documentary Some Kind of Monster detailed James’ struggle with addiction and his need to mourn and grow following the death of the band’s bassist Cliff Burton. Now, video has emerged from Thursday’s show at Estádio do Mineirão in Brazil in which James takes a moment to admit to his feelings of insecurity before receiving a group hug from his bandmates.

James took to the front of the stage to admit that he was feeling old and worried that he couldn’t hack it, saying (as transcribed by Ultimate Classic Rock):

“I’ve gotta tell you I wasn’t feeling very good before I came out here. [I was] feeling a little bit insecure, like I’m an old guy, can’t play anymore, all this bullshit that I tell myself in my head. So I talked to these guys, and they helped me — as simple as that. They gave me a hug and said, ‘Hey, if you’re struggling on stage, we’ve got your back.’ And I tell you, it means the world to me.”

At which point, James’ bandmates came to the front of the stage and all gave him a big hug. Aw.

Let me get my cynical metal asshole thoughts out of the way: yeesh. I appreciate James’ openness, but when you’ve got 60,000 fans in front of you, is it the time for this kind of gushing? Imagine Lemmy did that.

Okay, reactionary dickhead response aside: we’re glad James feels he’s able to communicate more, both with the crowd and with his bandmates. We hope he continues on his path of personal betterment, and wish him and his family and collaborators the best. If you’re worried about your mental health, seek therapy, take your time, and never stop working to be the person you want to be.

Metal Sucks Greatest Hits
540 -
Worst Year Ever: All of Our 2010 Year-End Sh*t in One Place
0 -
Twelve Reasons Babymetal are the Single Best Thing to Happen to Metal in the Past Decade
0 -
And Now, Here’s a Couple of Dudes Playing Slayer on Pre-School Instruments
0 -
Thirty of the Worst Heavy Metal Album Covers of All Time
0 -
This Very Fat Cat is The Best at Metal Drums
1570 -
Frankie Palmeri’s Track By Track Breakdown of the New Emmure Album: A Track By Track Breakdown