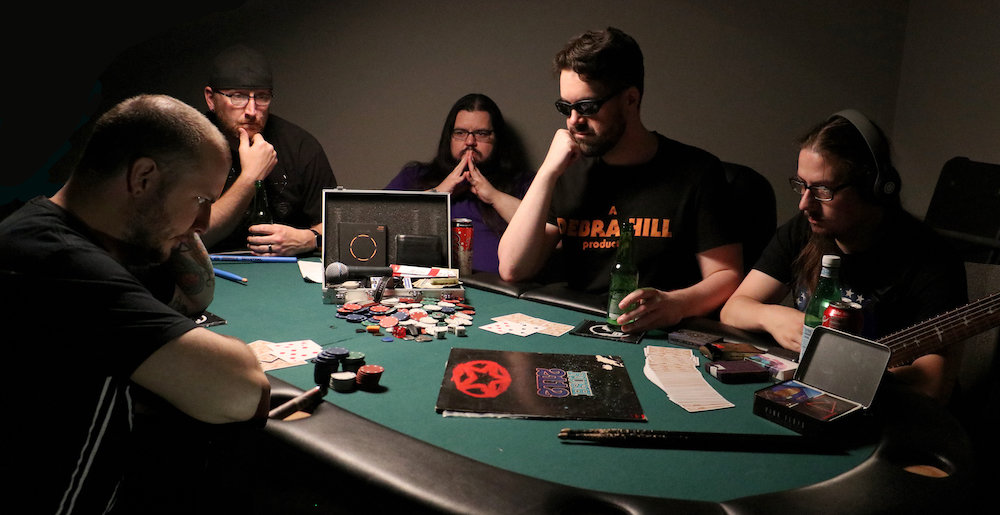 Something we really appreciate is that you almost get what Sovereignty‘s about when you look at their logo. Yeah, there’s a big dose of power metal here along with the prog. Yup, there’s some ancient mythology referenced. But guess what, this band have some tricks up their sleeve. Not content to play into one cliche or another, Sovereignty bring together a great swath of influences from across metal’s vast landscape to craft a sound all their own. Which is tough as hell, in this day and age, in Omaha (no shade, Omaha, I just don’t think of you as a metal hub).

The most immediate description that comes to mind, listening Sovereignty’s self-titled 2019 debut, is that this is Mercyful Fate’s Hank Sherman joining Nevermore and trying to write Shadows Fall’s Of One Blood. There’s a ton of crunch on this album, and a bit of that metalcore modernity. Lead vocalist Ryan Lieb doesn’t sound like he’s trying to imitate a medieval bard, he sounds like an American dude in 2019 singing about ancient battles and dastardly deceit. It’s definitely still overwhelming music, though — this stuff whirls, hard — so give these songs a second to really draw you in.

Here’s what Sovereignty told us about themselves:

“Sovereignty is an unsigned progressive metal band from Omaha, Nebraska. Formed by a bunch of nerds in 2015, we set out to create original music influenced by the atypical songwriting of Dream Theater, Between the Buried and Me, Gojira, Coheed and Cambria, and Mastodon, among others, with lyrics inspired by Stephen King, George R. R. Martin, and Celtic mythology, among other things. We are two-time nominees for the Omaha Entertainment and Arts Awards ‘Best Metal Band’ category, and we released our self-titled debut album in 2019 (available on Spotify and YouTube Music). We are currently in the process of writing our follow-up album and expanding our sound to include keyboards. For folks in the Omaha area, our next show is June 24th at the Down Under Lounge!”

Wait — that’s tonight! Holy shit, Sovereignty are playing Omaha TO-NIGHT! Everyone should go to the Down Under Lounge tonight and sell out Sovereignty’s show! Make this a thing! You gotta do it for Rhombus, Morty!

Check out Sovereignty’s Mercy, followed by information about their show tonight!

Metal Sucks Greatest Hits
0 -
That Time Shaun Got Drunk and Filmed a Music Video with His Cat
8850 -
The 101 Rules of Nu-Metal
0 -
Oderus Urungus from GWAR Reads Goodnight Moon
1,2110 -
The 101 Rules of Death Metal
0 -
Ten Reasons Why Record Labels Are Still Important
0 -
Anthrax’s Frank Bello is Really Excited to Be Here, Not at All Concerned About Swallowing Bugs