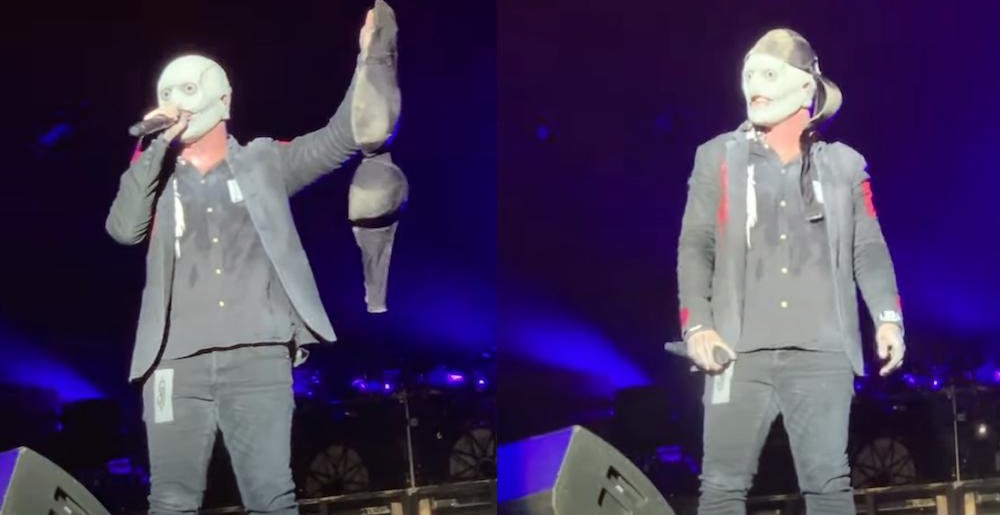 There are certain heavy metal concert traditions that will probably never die, and fans tossing their underwear onstage is (hopefully) one that will live forever. You know you’ve made it as a musician if someone launches their sweaty underoos at your feet as a token of their esteem. But being given the gift of underwear wasn’t enough for Slipknot frontman Corey Taylor the other night in Mexico City. No siree bob, when a female fan tossed her bra onstage, Corey decided he had to do a whole old-timey comedy routine with it.

As you’ll see in the video below, Corey’s getting ready to launch into Slipknot’s new single “The Chapeltown Rag” when he discovers a bra onstage. And all things considered, it’s an ample bra, too — big enough that Corey can comfortably wear it as a hat, which he does, like he’s Harpo fuckin’ Marx or something.

Of course, finding a bra at your place of business wouldn’t be complete without some slightly bizarre commentary, which Corey was happy to provide:

Aw, dude, you didn’t put it on? Be a man, put on that massive bra onstage in front of the most populated city on earth! Or at LEAST stuff as much of it as you can in your mouth! Tsk tsk, Lyle Gabriel would be ashamed of you.

Anyway, watch Corey’s bra antics below, and catch Slipknot on one of their upcoming tour dates: