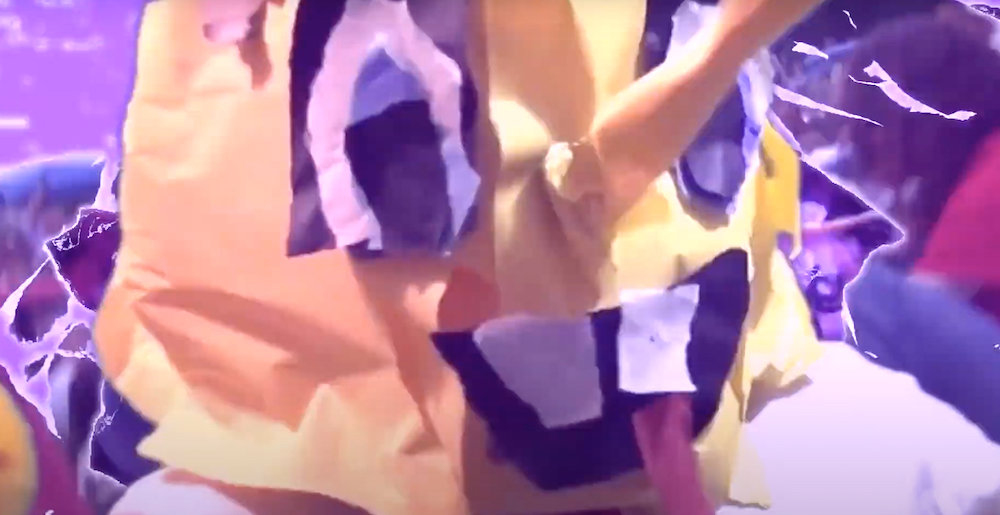 You gotta give Belushi Speed Ball props: they’re not taking anything too seriously. If their name wasn’t enough, the band’s new album What, Us Worry is a freakshow of blistering thrash dedicated to laughing its ass off at blistering thrash and all that comes with it (I mean, look at the cover). Now, the band have aimed their rapid-fire guitars and complete lack of shame at the only place silly enough to absorb it: a pineapple under the sea.

In the video for the band’s song “Magic Conch,” Belushi Speed Ball depict their favorite characters from Spongebob Squarepants. There’s even Jamison Land, formerly of GWAR, as Mr. fuckin’ Krabs. Of course, it certainly helps that the track is a speedy, punkish rager, and that the Spongebob sequences is super lo-fi and goofy; otherwise, people might think this band was being serious. Thankfully, this is not the case.

“Now that we tricked Jamison ‘Beefcake’ Land into the band with promises of eating gravy from Lita Ford’s toe crevices, we knew we had to write something magical. Thus, what’s more magical then the care-free Nick toon 90s. Full of Stop motion bumper reels, Cats connected to dog butts, ecto-coolers, and magical conches which can help you survive the woods. Director Beau Kaelin captured that feel-good dopamine nostalgia every millennial is addicted to!”

Check out our exclusive premiere of the video for “Magic Conch” below. Belushi Speed Ball’s What, Us Worry is out and available to stream.

Metal Sucks Greatest Hits
0 -
Watch an Old Lady Rock Out to AC/DC’s “Highway to Hell”
0 -
Etienne Sin: What the Actual Fuck
880 -
Anthrax: 101 Singers We’d Rather See Than Joey Belladonna
880 -
The Looks That Kill: God Forbid’s Doc Coyle on the Role of Image in Music
0 -
Verax’s Terrible “Time Wasters” is a Great Waste of Time
750 -
Anthrax vs. Axl vs. Anso: The Worship Music Double Review