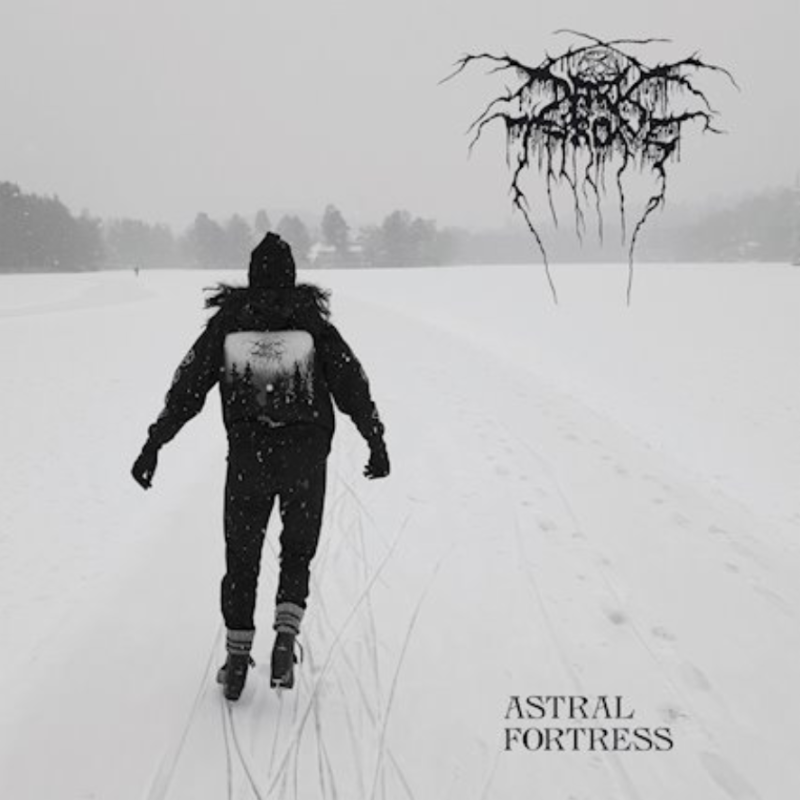 Yes, Darkthrone’s Astral Fortress is truly a “Gift of Gods.” This record will give you the feeling of meeting a deity. It drops today, so get ready to embark on this “epic old metal journey.” If you count Goatlord (1996), Astral Fortress is Darkthrone’s 20th studio album. As Darkthrone said back in 2006, they are “second to none… Nothing to prove. Just a [couple of] hellish rock n’ roll freak[s].” Astral Fortress demonstrates that this statement still holds true.

Darkthrone has been building the excitement surrounding Astral Fortress since their first teaser on August 3 – just over a month before the album’s name and release date were revealed on September 7. The band’s previous chapter, Eternal Hails…, blew us away in June 2021. And like that album, Astral Fortress was recorded at Oslo’s Chaka Khan Studios on the recommendation of Nekromantheon.

Astral Fortress is a powerful testament to Darkthrone’s intentions over the years, even if the duo believes in turning against the rules they once valued in favor of freedom and authenticity. Darkthrone’s continued rebellion against a more clinical and professional sound is the reason they have achieved something so charismatic with Astral Fortress. The album’s sounds is cold, organic, and pleasantly shabby.

This year marked the 30th anniversary of Darkthrone’s A Blaze in the Northern Sky (1992) — the first full-length True Norwegian Black Metal studio album. When Darkthrone decided to convert to black metal, they realized that they wanted to go in a “regressive” direction, whereas many of their peers became more progressive. Although the duo no longer claims to play “black metal,” they still strive to create primal caveman music. Astral Fortress digs deep into the past with a cemetery worker’s intensity. The album pulls carefully curated flavors from the graveyard of bygone decades.

Upon listening to Astral Fortress, there is no mistaking the fact that Fenriz and Nocturno were “Raised on Rock,” which they both discovered through their “cool uncles.” Astral Fortress is a bubbling cauldron of doom, thrash, black, and heavy metal. You can hear Darkthrone mining inspiration from their own work. Although the influences are about what we expected, the sound is wholly unique. Even for Darkthrone, this is something special.

Astral Fortress is defined by extreme beauty, yet is equally as tough, rugged, and aggressive. To borrow a line from The Cult Is Alive (2006), expect “burning riffs and [yes] ‘rapish’ drums” that charm your inner snake only to turn around and launch into slaughtering mode at the drop of a dime. As a listener, you will alternate between gentle headbanging and flying into frenzies. Fenriz and Nocturno are wild and spontaneous on their instruments. Open to impulse, these big bad geniuses catch you off guard with surprises of various sorts. This Darkthrone odd couple still has the glove-tight chemistry of diabolical twins. Nocturno’s vocals are unmistakeable.

The atmosphere on Astral Fortress is absolutely wicked! Darkthrone could not have made better use of synths and mellotron. The pacing and shifts are so magnificent that you won’t even notice that “The Sea Beneath the Seas of the Sea” runs for over 10 minutes. There isn’t a weak moment on this breathtaking offering.

Fenriz compared the first part of Astral Fortress’ opening, “Caravan of Broken Ghosts,” to “Quintessence” — the penultimate track on Panzerfaust (1995). “Quintessence” features similarities to “Noregsgard” by Storm — Fenriz’s incredible, though short-lived, project with Satyr and Kari Rueslåtten. Darkthrone first unveiled the song on October 19 with a music video that was shot by the “Hiking Metal Punk” himself, Fenriz, during a walk in the woods. Astral Fortress’ sixth track is called “Kolbotn, West of the Vast Forests.” This is because Fenriz has spent most of his life in Kolbotn, where his family first moved in 1978. (Fenriz’s first home was in the woods of Vinterbro.)

Before uttering any harsh words about Astral Fortress, ask yourself the famous question posed on Dark Thrones and Black Flags (2008): “Does your metal know what metal really means?” If the answer is “no,” then the “treasures [contained in Astral Fortress] will never befall you.” I would personally tell haters to take a good look at the title of Darkthrone’s 13th album, F.O.A.D. (2007), but that wouldn’t be very polite; so enjoy this trippy ride.

In closing, no 21st-century record deserves to be this good. Astral Fortress is the kind of album that you should take with a huge “Thank you!” If your taste in music is at all decent, this release is bound to become one of your new “go-tos.” Astral Fortress will give you the feeling you had when you first discovered metal.

(NOTE: If you love this album, check out Sarke, which is fronted by Nocturno, and Valhall, which Fenriz co-founded in 1987. During a period when Fenriz stepped down from Valhall to focus on Darkthrone, Thomas “Sarke” Bergli of Khold and Tulus filled in on drums as did K. J. Lervåg and now ex-Ulver’s Erik Olivier Lancelot, a.k.a. “AiwarikiaR.” Bergli incorporates a lot of ’70s and ’80s influences while also bringing the weight of his ’90s black metal background.)