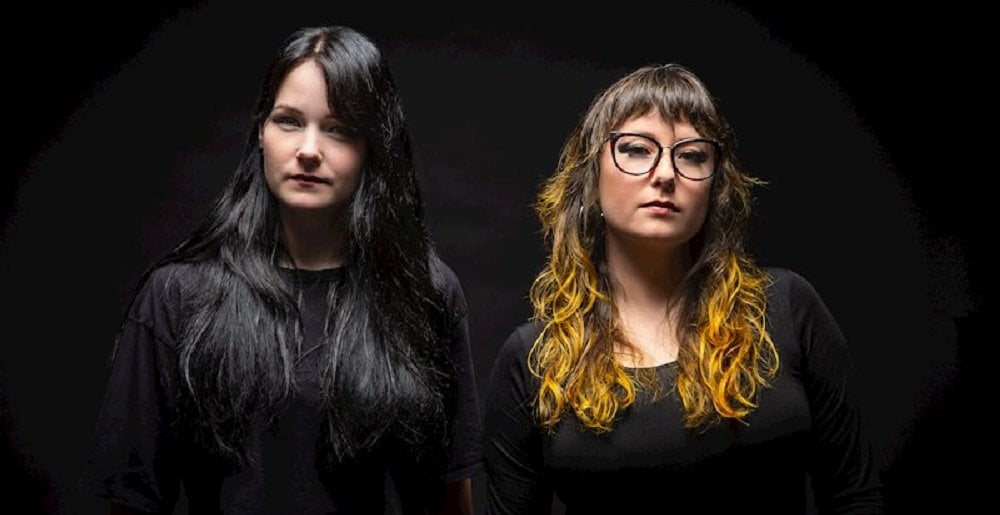 Hoaxed on the Origins of Their Debut Album Two Shadows

At the end of October, Hoaxed released their first full-length album Two Shadows via Relapse Records. While getting something written, recorded, and released on a major label is an impressive feat for any new band, vocalist and guitarist Kat Keo and drummer Kim Coffel are by no means strangers to making music. They’ve been active in Portland, Oregon’s underground music scene for years and now their new venture holds a special kind of chemistry.

The band channel influences from doom and Americana to death metal and they do so with style. We recently chatted with them about their debut album and how it all came together.

Can you start by talking a little bit about what you’re excited about when it comes to this record, what lead up to it, and the work you put into it so far?

Kim: We were working on it for at least a year before it came out. Every piece of it we’ve done ourselves except for literally hitting record and setting up all the mics. It’s been a crazy journey because we write all of the lyrics. Kat does the lyrics, the vocal melodies, the guitar, and half the songs. She also wrote the bass. For my part, I do synth and drums, and then for half the songs, I wrote the bass. I did the album art too, so from beginning to end, we knew what we wanted to do with the videos, the costumes for the videos, everything. So having it out in the world is really rewarding.

Kat: I fully agree with that; Kim just laid it out perfectly. This album has been our life for a year plus, everything from recording to writing music to music videos, all of that, and now it’s so surreal to have it out there. When Relapse sent us our own copies to hold in our hand, that was just the most rewarding feeling.

It sounds like the writing is pretty collaborative. Would you say it’s pretty much a 50/50 process when it comes to the band?

Kim: I think, since I play drums and Kat plays guitar, that cohesiveness and synergy is there when we just start jamming, and we automatically start writing songs even when we’re not expecting to. Even on days when we’re like, “Fuck it, we’re just gonna have fun,” we end up writing. That’s when a lot of good stuff comes out, actually. That’s the core of our songwriting, just jamming, drums and guitar, and building layers from there.

Kat: I’m a rhythm guitar player. That’s what I prefer to do, so when Kim and I play together, it’s just really easy and fluid; it’s fun. It just works really well.

Having your debut come out on Relapse is a huge deal — how did that partnership initially come about?

Kat: We’ve been thinking about this a lot recently because people have been asking us that, and it really just came out of the blue. When we look back at how it happened, we put out a four-song EP and had no support when we put it out. Kim and I just started the project over quarantine. We just hung out and wrote an album and formed this band, and we put it out with, like, no concept of how it would be received. And less than a month after it was out, Relapse was emailing us. I guess we got in the right ear of someone who knew Relapse, and they reached out to us. We were already writing the new album when we started talking to them and they were like, “We want to put it out.” They didn’t hear any of it until it was done. We sent it to them, and they’re like, “Great, that sounds perfect.”

What’s the background of the relationship? How did you start playing music together?

Kat: Kim and I have been friends for over a decade, and we met through music. I put up one of those “take a number” fliers, and Kim took my number, and we started jamming. Kim was 19 at the time; we couldn’t even play in bars. We’ve been in a couple bands together since then. The last band we were in together disbanded in June of 2019. I think after that happened, Kim and I weren’t ready to stop playing music; we both wanted to keep doing this.

Reflecting on this record, what are some of the big lyrical or musical themes on the record? What do you hope people take away from it?

Kat: Kim and I have talked about this a lot. We think the biggest takeaway from the lyrics are cautionary tales. We kind of wrote this as a series of vignettes. It’s not like a rock opera, there’s only a general theme, but a bit theme is dabbling in things you’re not 100% sure of what you’re doing, whether it’s supernatural or a little bit darker.

We’d like to thank Kat Keo and Kim Coffel for taking the time to chat with us. You can pick up Two Shadows today via Relapse Records.

They sure can play.

Artist Breakdown 0
The Scenic Spots in the Pacific Northwest That Hoaxed Uses for Inspiration
October 28th, 2022 at 3:36pm Hesher Keenan

Some idyllic scenery to take in on a Friday afternoon.

Their debut album Two Shadows is coming on October 28.