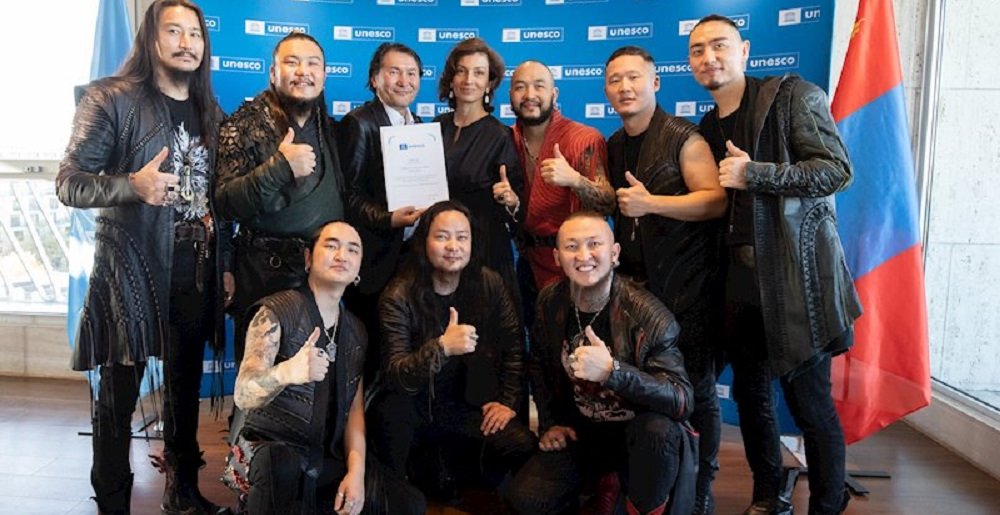 The Hu Recognized as an Artist for Peace by UNESCO

Earlier today, Mongolian folk metal act The Hu were formally recognized by the United Nations Educational, Scientific and Cultural Organization (UNESCO) as an “artist for peace” at the organization’s headquarters in Paris.

This honor makes The Hu the very first rock band to receive the honor, placing them among other artists that bring “cultures together and [support] artistic creation.” UNESCO officials said the decision to honor The Hu stems from a visit to Mongolia that UNESCO’s Director General Audrey Azoulay took back in August. At the time, she met the members of The HU and found their “Hunnu Rock” style and ideas matched UNESCO’s values.

“Traditional knowledge has much to teach us, for instance in appreciating the beauty and fragility of nature. This message is at the heart of the Hu’s songs and UNESCO’s work. I am delighted that we will be able to count on The Hu’s voice to share this conviction on the global stage, using the power of music as a universal language, especially with young people, who will be the ones to take these values into the future.”

Formed in 2016 in Ulaanbaatar, The Hu have since gained a following around the world, having toured with some of metal’s biggest names, including Megadeth and Five Finger Death Punch.

For the band’s leader Gala, their melding of traditional Mongolian aspects like Khöömei (throat singing), the tsuur flute and the Morin Khuur (horse-headed fiddle) with heavy metal is a direct reflection of the importance the Mongolian people place on their history.

“Mongolians have utmost respect for our history, culture and language that were left to us from thousands years ago through our elders and ancestors. The Hu band’s goal and purpose is to first perform a unique genre of music that gives strength and power every time you hear. Secondly, to show the world the Mongolian nomadic environmentally aware livelihood that was passed down generations ago, and to inspire others to live minimalistic life and enjoy life to its fullest. UNESCO bestowing on the HU the ‘Artist for Peace’ designation shows their appreciation towards cultural diversity and heritage pieces that are of great value to Mongolians. The partnership between The HU band and UNESCO will bring awareness towards every culture that is distinguished by their unique heritage and core values, so we are excited to be part of a movement that can improve and change so many lives.”

This isn’t the first type of commemorative award they’ve received as a band. Back in 2019 they were awarded the Cultural Envoy of Mongolia certificate and in 2020 they were given the highest honor their country could bestow: the ludicrously badass named “Order of Genghis Khan.”

The Hu are currently involved in a tour across the U.K. and Europe. You can check out the dates below: