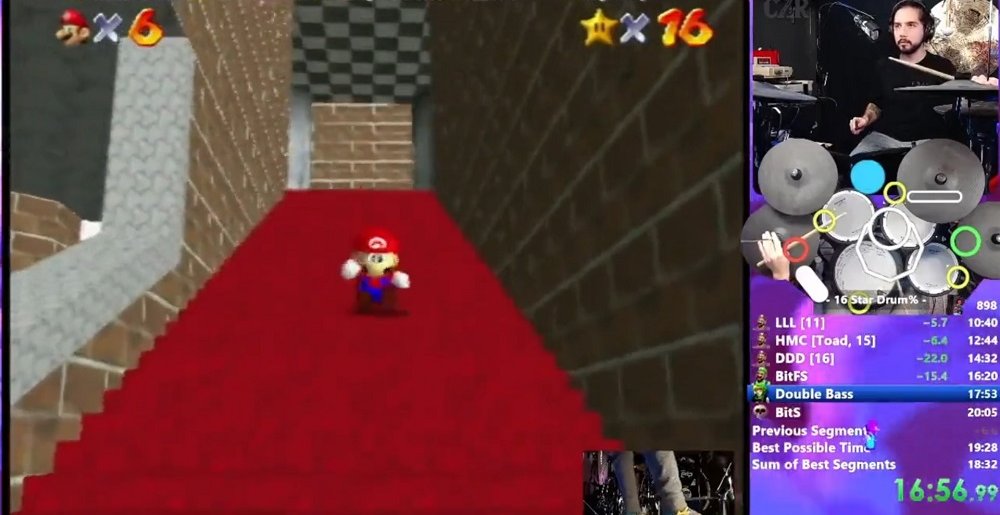 There are times when I look at the internet and think “…boy, this was a mistake.” But then there are other times where I get to see some wild shit — mostly video game related shit — I never thought possible. Something like a Twitch streamer that calls himself CTZ setting a world record by beating the Nintendo 64 classic Super Mario 64 in less than 20 minutes using his drum set as a controller.

Though the stream itself happened a couple weeks ago, the clip has been gaining some traction in recent weeks as Twitter user and Full Squad Gaming founder Jake Lucky posted a clip of the final boss battle between CZR and Bowser.

To put that into perspective, HowLongToBeat.com lists Super Mario 64 as having a full playtime of 12 hours if you just beat the main story. If you add side quests, that’s 17 hours and if you want to do every single possible thing, that’s 20 hours. My guy beat it in under 20 minutes on the drums. I can’t emphasize that last part enough.

So far, CZR is the only person to successfully complete the game using only his drum kit. Oh and it’s also worth noting that he only collected 16 stars in that run. There are 120 stars in total to collect in Super Mario 64, so he’s got a long way to go to use his drum set to 100% complete the game in less than 20 minutes.

Interestingly, CZR said he’s already thinking about other games to beat with the drums, including “SMB3 (Super Mario Brothers 3), Goldeneye, Minecraft, Majora’s Mask” to name a few. I can’t imagine what the drums would sound like while trying to gun down some asshole playing as Oddjob. Might put Meshuggah’s “Bleed” to shame…

Sponsored Links from Across the Internet
Show Comments
Related Articles
Metal in the Media 0
Trivium’s Matt Heafy Reveals How Much He Earns on Twitch
June 21st, 2021 at 8:08am Vince Neilstein

The guitarist/singer has said he earns more from Twitch than Trivium when the band isn’t on the road.

The Trivium frontman and guitarist makes “Wellerman” heavy as hell.