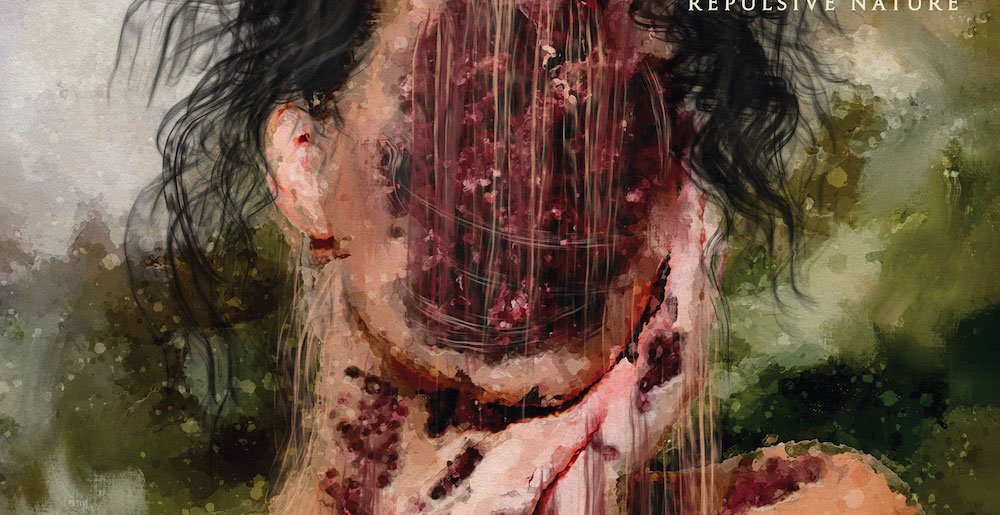 Repulsive Nature, the debut album from Pacific Northwest rippers Re-Buried, is a meat-and-potatoes death metal album. It isn’t fancy but it’s a knuckle-dragging, riff-based slab of death metal that gets in and out with the intention of doing one thing: shredding faces.

Re-Buried share members with Un and Forn but couldn’t be further apart musically. Whereas the other bands appreciate slowness, control and build, Re-Buried keep things pretty barebones. Song lengths are clipped to necessary lengths, allowing room for breathing and solos but not meandering, and the clear focus of Repulsive Nature is to get to the next assbeater of a track in an efficient time.

It works best on songs like “Planetary Obliteration” and the title track, where the barely-over-two-minute runtime allows Re-Buried to just bear down with all their might. The album was recorded with legendary engineer Billy Anderson, who’s worked with literally everyone from Bongzilla and Acid King to Tragedy, Swans and Sick of It All, something that guitarist Paul Richards says influenced the final product.

“Getting to work with Billy Anderson was a dream come true, he’s a recording wizard with a wild imagination. We got to spend a whole day punching in a bunch of weird sounds, gongs, reverse guitars, I double tracked some stuff using a fuzz pedal. Stuff that I would have never come up with. The cabinet I used was a heavily thrashed Marshall 1960a. Billy and I replaced a blown speaker in it and we decided to keep the back panel unscrewed to make sure we wired it right. On my last guitar track the back of the cab blew off, so that was pretty cool. The ambient sounds in the beginning of the album were captured by Billy when I set my guitar down and forgot to mute it. They were playing back some drum tracks and the subwoofer started rattling the open strings. One of those happy accidents and he’s the guy who knows what to do with them”

“Working with Billy has always been awesome, I’ve recorded a few other projects with him, so I knew he was the dude for the job and the guy to get the drum sounds I wanted.”

Repulsive Nature is out on January 20 via Translation Loss, but you can let Re-Buried rip your face off right now. The band are playing a few live dates around their album release.