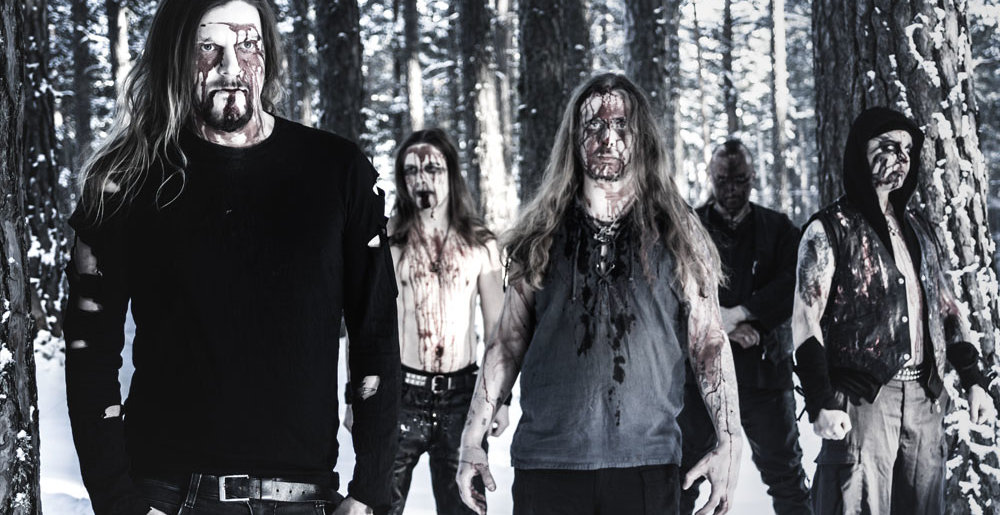 The Finnish folk/pagan/black metal band Moonsorrow have long been a favorite of MetalSucks. We’ve sponsored their tours, praised their music, promoted them with guest columns, and even defended them against accusations of Nazism — which we were led to believe, at the time, stemmed purely from a resemblance of the design of the letter “S” in their logo to the double-Sig Rune SS insignia.

Unfortunately, new information has now come to light — information which suggests the band is deeply insensitive at best, and at worst may, indeed, be fascist sympathizers.

In February, Moonsorrow played four dates with an Estonian band, Loits, who Moonsorrow drummer Marko Tarvonen called “our soulmates” and “our old friends.” This was a troubling development for many fans. As first reported by Varis, a Finnish “network aiming to destroy organized fascism and remove its social breeding ground,” Loits are, to put it mildly, problematic:

“[Loits] sing about Estonian SS volunteers and partisans, describing them as heroes fighting against the Soviet Union in World War 2. As is typical for fascist rhetoric, in some of their songs they pit against each other the imagined ‘national degeneracy’ of modern day Estonia and the sacrifices made by forefathers on battlefields, and sing about the imminent ‘battle for freedom’ to come.”

Varis also points out that “In the booklet for their 2004 Vere kuitse kohustab record, the band members dressed up in uniforms modeled on the Estonian 20th grenadier division of the Waffen SS.” Vere kuitse kohustab, by the way, translates to The Call of Our Blood Commands Us.

And while one could argue that the band is only interested in history and not actually endorsing fascism, à la Slayer, a myriad of evidence suggests otherwise:

So while Loits have repeatedly denied being a NSBM band (see: all of the interviews linked above), their actual stance on these issues is more than clear.

When fans took to Moonsorrow’s Facebook page to ask why they would tour with a band whose rhetoric is as hateful as that of Loits, one of the band’s members — reportedly co-founder Henri Sorvali (who is also a member of Finntroll) — replied, simply, “We don’t care. Sorry.” When one fan demanded that Moonsorrow “take a stand against outspoken nazi [sic] bands,” the band responded by asking “Why would we take a stand against our friends?” They would later say “We have no issues with history,” implying that Loits are chroniclers, not endorsers, of Estonian Nazi sympathizers, despite all the evidence suggesting that this is not the case.

In fact, Henri Sorvali has defended NSBM bands in the past. In a 2014 posting on his blog, Sorvali justified a photo of himself wearing a Burzum shirt by, somewhat ironically, likening pleas for him to not wear that shirt with the censorship of the Third Reich. He also questioned the very credibility of the metal fans who called for him to stop wearing Burzum merch (thereby endorsing Varg Vikernes’ and his political views) and downplayed Vikernes’ hateful rhetoric by facetiously pointing out that, no, Varg has not been, on the whole, as evil an influence on the world as Adolf Hitler (one massive [sic] around all of this):

“Another fun fact is also, that apparently at some point of my life, I’ve become a ‘public figure’. And you see, public figures aren’t sadly allowed to wear shirts that may offend someone. Completely understandable though, as it wasn’t allowed in 1940’s Germany either. Verboten!

“About 70 years, a zillion dead and one particular living Norwegian nazi later, a picture taken from the recording sessions of Varjoina- album showed me sporting a Burzum- shirt, which was wished to be censored in the future from our public imagery. Cencored, by someone who has absolutely no idea of what else Burzum  represents as an artist to people like me, people who actually were actively involved in the ‘scene’ when this second- to- hitler -madman made his famous albums.

Sorvali then melodramatically suggested that fans who didn’t want him to wear a Burzum shirt would penalize him for even having heard Burzum’s music:

“Would the next thing be maybe removing all the Burzum- influenced parts from our music as well? Heck, let’s actually ban whole Moonsorrow from the surface of the Earth because I’ve heard that someone in the band heard Burzum at a party in 1996!”

In that same post, Sorvali makes repeated references to the “American Inquisition” (one of which is housed in a re-appropriation of this famous Monty Python gag, presumably because, consciously or unconsciously, he thought the use of humor would dampen the distasteful nature of his argument). The implication of this phrase is that cries for increased sensitivity in the metal community are on par with the Spanish Inquisition, an act of religious persecution that lead to the deaths of roughly 5,000 people, most of whom were Jewish or Muslim, and the expulsion of tens of thousands of Jews and Muslims who were given the choice of either converting to Catholicism or leaving Spain (to say nothing of the prosecution of hundreds of thousands of other Spaniards who were penalized for allegedly not being “true” Catholics).

And yet, neither the defense of his friends nor the offense taken at his decision to repeatedly endorse Burzum presents the most egregious evidence of Sorvali and Moonsorrow’s flippant attitude towards bigotry and fascism. From the Varis report:

“The credibility of Sorvali and Moonsorrow is not made any better by their 2005 side project, the ‘humoristic’ grindcore record Lakupaavi (roughly translated to ‘the liqorice pope’. Liquorice is often used as a racial slur in Finnish.) The songs have ‘funny’ names such Kuolema taidehomolle (‘death to the art fags’), Juutalaiskysymys (‘the Jewish question’) and Hakaristi on oikeesti kaunis (‘the Swastika is actually beautiful’).”

Indeed, even the album art for Lakupaavi’s sole release, 2005’s Raah raah blääh, is either indefensibly sophomoric, indefensibly offensive, or both:

Lakupaavi included four of Moonsorrow’s five members — Sorvali and his cousin, vocalist/bassist Ville Seponpoika Sorvali, guitarist Mitja Harvilahti, and Tarvonen. In a 2010 interview with Metal Assault, Harvilahti claimed that Lakupaavi was meant to be “fun” and that “We are not Nazis, we hate Nazis, racism and everything that destroys humanity.” But it’s not clear what is “fun” about Raah raah blääh. It’s repugnant for the sake of being repugnant, which might seem “edgy” and “rebellious” to grade-schoolers and Internet trolls, but lacks any actual punchline. If it’s a work of satire, it’s a complete failure.

And while one could argue that Moonsorrow should not be penalized for an album they made fifteen years ago, seeing as plenty of metal musicians have done stupid, hateful stuff in their youth (see: Dragonforce), the fact that they are still willing to tour with and defend a white supremacist band doesn’t exactly suggest that they feel any remorse for this past misdeed.

(Incidentally, Lakupaavi’s logo is clearly a nod to that of Napalm Death. But it’s hard to imagine the outspokenly left-leaning grindcore legends approving of such an “homage.”)

The fact is, for at least fifteen years, Moonsorrow have turned a blind eye to, and sometimes directly helped to spread, hateful ideologies. We can hope that at some point Moonsorrow demonstrate contrition for helping to spread such hateful ideologies, but to date, there’s no evidence to suggest that will ever happen. At a time when fascism and bigotry are on the rise around the world, and with the music of a myriad of talented, tolerant metal bands at your fingertips, is a group with this moral philosophy truly who you want to support?

It’s less impressive than it sounds.

Metal Sucks Greatest Hits
0 -
Op-Ed: When Did Slayer Start to Suck?
0 -
I Watched Rock of Ages so You Don’t Have To
0 -
Rigged: Luke Hoskin of Protest The Hero
0 -
The Secret 2 a Successful Career in Music
0 -
Chad Kroeger and Avril Lavigne Finally Wrote a Song So Awful that the Internet Has Collectively Rejected It
540 -
Matt Pike’s Top Ten T-Shirts