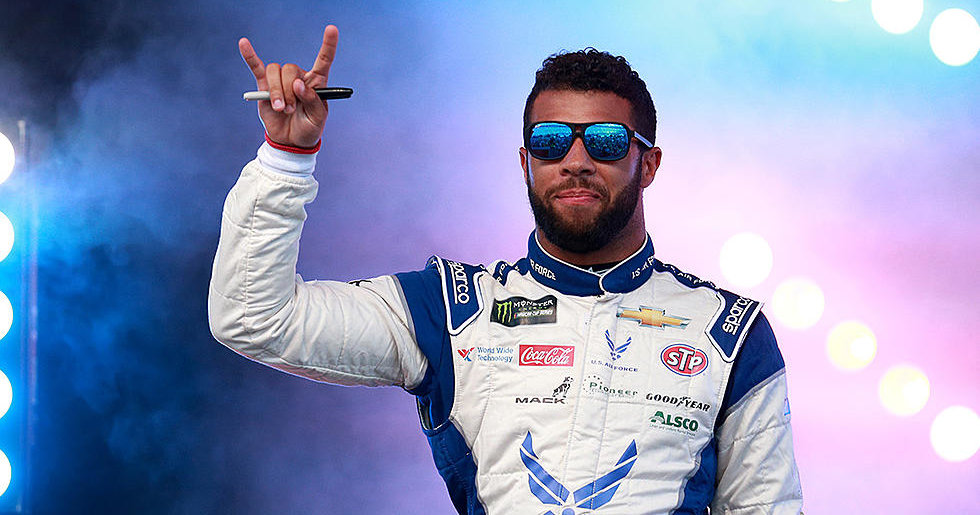 Darrell “Bubba” Wallace Jr., the only black full-time driver at NASCAR’s highest level, made history this week when he almost single-handedly forced the racing league, whose fanbase leans heavily conservative, to ban confederate flags from its events. Wallace kicked off his one-man protest by wearing an “I Can’t Breathe / Black Lives Matter” shirt before a race in Atlanta on Sunday, then called for NASCAR to ban the offensive symbol, which has long pervaded its broadcasts and events, in a CNN appearance the next day. The league took quick action to ban the flag on Wednesday, and later that day Wallace drove an all-black #BlackLivesMatter car at a race in Virginia and finished at #11, his best rank ever at that particular course.

But Wallace’s badassery doesn’t end there: he’s also a metalhead, and a sick drummer, to boot!

Wallace has been open about his love about heavy metal in the past, talking about how his music genre of choice has helped get him through some dark times in his life (Wallace has also been an outspoken advocate for speaking openly about depression). In a series of tweets last year, he explained:

“Alot of people have come up or reached out to me after speaking out about depression, thanking me.. to this day. Never understood why at first, but living in this society today.. we’re judged before we speak or do. Labels are placed upon us instantly, it’s not fair..

“People see depression as a sign of weakness. I’m guessing that’s why a lot of people hold it in.. just by speaking about my struggles, it’s helped so many people! So many! That’s not weak at all. It’s the exact opposite I feel. Speaking up holds alot of power and strength!..

“We face a lot of trials and tribulations in life.. basically a lot
lol. We all have different ways of dealing with them. My mother always tells me this is just another chapter in God’s plan that he has written out for you. I believe that 100%…

“He places obstacles in front of us to test us, to make us learn. God also places blessings in our life.. people, music, sports, etc.. Racing plays a huge role in my depression to be honest. But it’s all I’ve known for 17 years. Music is my counter act to it…

“Music is powerful on so many levels, I’ve had kids and teens come up telling me they battle with depression and what can they do.. I tell them find something you love and can’t live without. Music is my jam! Pun intended, the more frustrating days the heavier the songs..

“I love my heavy metal screamo RAWR stuff
Some of the best messaging has come from my type of music. I could go on n on.. moral of the story is.. find something you love that nobody can take from you..indulge yourself, let it take you away! We’re all made different! Live to be!

The latter is a quote from “Death’s Hand” by The Amity Affliction. Not really my thing, but at least he’s not listening to Godsmack and Staind, ya know? It’s bordering on the real shit. Wallace even publicly made fun of his pal, fellow NASCAR driver Ryan Blaney, for listening to Nickelback. Dude gets it.

And Wallace’s roots in metal go even deeper than that… you’re here for the drum video, right? Here it is, from all the way back in 2016. That’s Blaney belting out those guttural vocals by his side:

While haters are gonna hate and try to claim that the beat Wallace is playing is relatively simple… yeah, nope, that shit is DIFFICULT and requires some kind of training or extensive practice. He knows what he’s doing.

Here’s a Fuse feature video, filmed in 2016 as well, in which Wallace talks about utilizing Metallica, Avenged Sevenfold and Northlane music to pump him up before and during races, says he’s “all about the breakdowns,” and shows off some air-drumming skills:

My hat is off to you, Bubba, for being both a badass civil rights activist and metal drummer. Let’s jam sometime!

Sponsored Links from Across the Internet
Show Comments
Related Articles
Metal in the Media 0
Killswitch Engage Have Their Own NASCAR Chevrolet Now
September 18th, 2019 at 10:17am MetalSucks

Tyler Riddick will be behind the wheel.

The band thinks this is because of “reactionary concerns from other long-time participating sponsors.”

Metal Sucks Greatest Hits
0 -
Video: Killswitch Engage’s Adam Dutkiewicz Wins Everything on The Price is Right
0 -
What Will Happen When a Member of Metallica Dies?
2760 -
Who Are The Top Ten Lyricists?
0 -
Exclusive Interview: Lamb Of God Drummer Chris Adler on Randy Blythe’s Imprisonment, Upcoming Tour and the Future of the Band
0 -
Twenty Hard Rock and Heavy Metal Celebs’ Mugshots
2060 -
How Metal Nerds Choose What Bands To Like: A Scientific Model