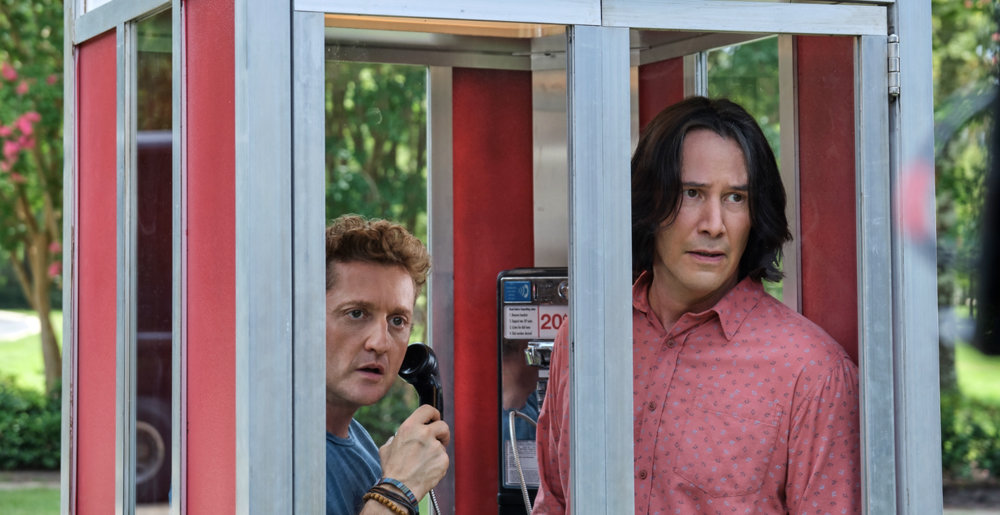 Comedy sequels are a dicey proposition, because humor requires surprise, but a sequel demands familiarity. And reviving a long-dormant franchis is risky, too: for every Mad Max: Fury Road, there are a dozen Crystal Skulls, Live Free or Die Hards, and Super Troopers 2s.

So Bill & Ted Face the Music, both the third film in the Bill & Ted franchise and the first entry in almost thirty years, seems, on paper, like it should be more less totally bogus. And yet, this dynamic duo’s return is most triumphant.

It’s hard to talk about the story without giving away any of the best bits. Suffice to say, our titular heroes (Keanu Reeves and Alex Winter), aided by their adoring daughters, Billie and Thea (Brigette Lundy-Paine and Samara Weaving), go on another excellent adventure through time in an effort to write a song that will unite the universe (as with Excellent Adventure, there’s a ticking clock mechanism to build suspense, although that mechanism makes the stakes MUCH higher this time around). Hilarity ensues.

To be sure, B&TFTM has some shortcomings. Once again, there’s a cast of famous historic figures, except they aren’t given any time to truly shine the way their counterparts in Excellent Adventure did; there’s no scene akin to the one in which Napoleon dines at the Ziggy Pig while Genghis Khan terrorizes a sporting goods store. A subplot involving Bill & Ted’s wives (Erinn Hayes and Jayma Mays) starts out being extremely funny, but is resolved so abruptly I have to imagine a chunk of it got cut out of the film. A beloved supporting character you likely assume will reappear is called out but never actually seen, while a different supporting character is brought back in the service of a running joke that hasn’t aged very well. And the movie kinda-sorta asks you to at least partially ignore the end of Bogus Journey, which isn’t the biggest deal but will annoy other OCD-afflicted continuity nerds like me.

The thing is, the cast is so great, and so many of the jokes land, that these deficiencies end up feeling minor. Reeves and Winter full-on murder it, and Weaving and Lundy-Paine are note-perfect as their daughters, creating characters that feel like more than just female versions of Bill and Ted (for one thing, they’re considerably smarter than their dads). William Sadler’s Grim Reaper is probably in the movie for less time than you’re expecting, but every second he’s on screen is gold. The new cast members — particularly Jillian Bell and an unrecognizable Anthony Carrigan — all make for terrific additions, too. Kristen Schaal and Holland Taylor, as the daughter and widow of the now-deceased Rufus, aren’t given all that much to do… but then, neither was Rufus, a character who was cool entirely because he was played by the late, great George Carlin (seriously, go back and re-watch the original movies — if Rufus had been played by Joe Piscopo, no one would have cared about him).

To be sure, a lot of the credit also lies with director Dean Parisot, a series newcomer. Parisot directed Galaxy Quest, one of the best sci-fi comedies of the past twenty years, so he’s a natural fit for this material; the flick is a very brisk 98-minutes (including a droll post-credits scene), none of which feels wasted.

But the real heroes here may be screenwriters Chris Matheson and Ed Solomon, who penned all three Bill & Ted movies. Not only did they write some killer gags and manage to thread the needle between fan service and over-reliance on nostalgia, but they’ve created a story that both highlights and enhances the easy-to-overlook profundity of this franchise: that it’s all about bringing people together (Bill and Ted, in contrast to Beavis and Butt-Head or even Wayne and Garth, are overwhelmingly sweet-natured characters; they may be on the less intelligent side, but they’d never, say, humiliate someone on television as retaliation for their own foolish mistake). In the case of Face the Music, “bringing people together” also means reconciling with and/or forgiving loved ones we may have wronged or who may have wronged us. That feels especially relevant in 2020, when it seems like the world is more divided than ever.

Bill & Ted Face the Music comes out tomorrow (August 28) in theaters and on VOD.