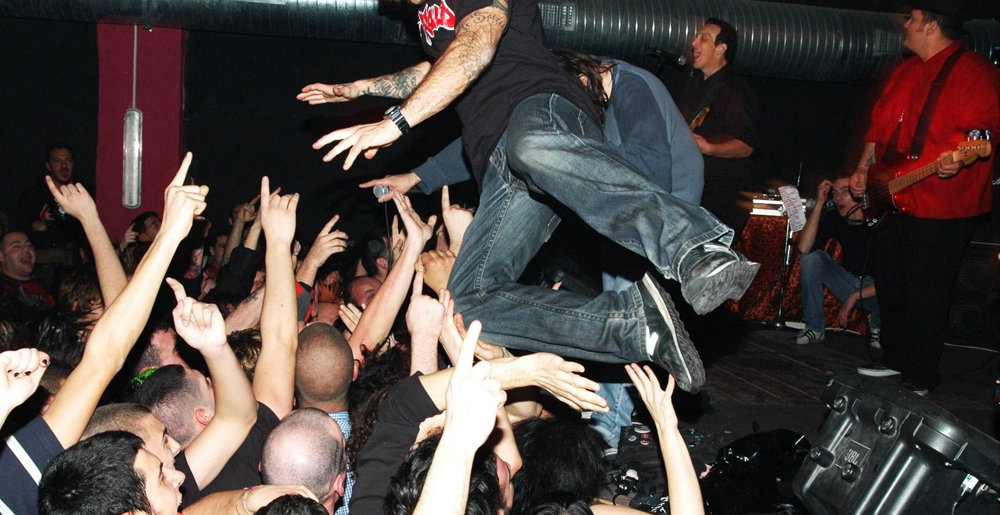 Lambgoat reports that 46-year-old police officer Jason Kooken has been awarded a $2 million settlement for injuries sustained as the result of a stage diver at 2017 hardcore show in New Hampshire.

The stage diver landed on Kooken’s head, which left him temporarily paralyzed and resulted in serious damage to his spine. He has since recovered after undergoing spinal surgery at Jersey Shore Medical Center.

Kooken’s lawyer, Mark Morris, argued that security at the show did nothing to prevent the stage dive from taking place:

“This individual walked right past security, climbed on the stage, pointed and then corkscrewed his body over the band’s lead singer, flipping directly onto Mr. Kooken’s head.”

Asbury Audio, the company Kooken sued, will apparently be covered by insurance. Still, the company’s president, Jason Dermer — who personally donated more than $2,000 to a GoFundMe campaign to help cover Kooken’s medical costs — was displeased by Kooken’s actions:

“I was at the hospital to see him the moment they allowed visitors, bringing vegan meals since the hospital couldn’t. Every member of Agnostic Front stopped in as well… We all became friends. [Kooken] has been a guest in my home. Given the opportunity to let us out on a personal level, [Kooken] declined to do so.

“He was hurt. Permanently injured. That I understand. But to lie/allow people to lie in your name to find your way out of personal responsibility, win a settlement, and then go to/allow his attorneys to go to the press in [this] manner is unacceptable. Insurance paid…oh well. That’s what insurance is for. But what was taken and can never be replaced was the positive memories of doing the one thing that we could for Dave [Franklin]. This is not what ‘friends’, especially in our scene, do to each other.”

Sponsored Links from Across the Internet
Show Comments
Related Articles
Tour de Force 0
Sick Of It All and Agnostic Front Announce Spring and Fall Co-Headlining Tours
March 17th, 2022 at 10:08am Emperor Rhombus

Get your face rocked with two different helpings of NYHC.

The band was so anxious about getting signed that they stalked Jonny Z at an IHOP.