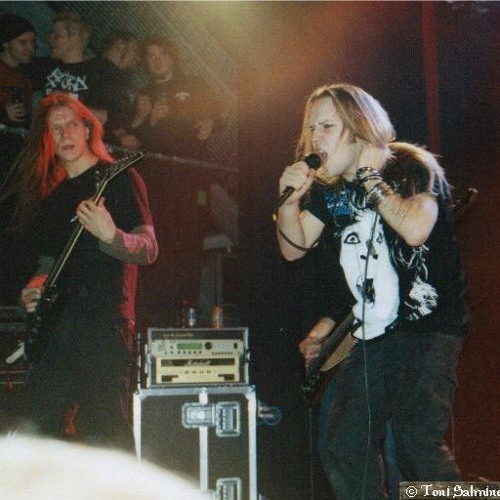 On March 1, 2002 a memorial concert for Death mastermind Chuck Schuldiner, who passed away from cancer the year prior at only 34 years old, took place at Nosturi in Helsinki, Finland. Live recordings from that night featuring Children of Bodom’s Alexi Laiho singing two Death songs have now surfaced online for the first time in the wake of Alexi’s passing.

One of the bands to perform at the show were Evil Chucks, a Finnish all-star group who played songs from Death’s first three albums only. The band’s core stayed on stage while guest vocalists joined for different parts of the set, with the segment featuring Alexi looking like this:

Alexi performed on the Death classics “Within My Mind” and “Defensive Personalities.” Journalist and author Björn “Nalle” Österman has kept these recordings in the vault until now, deciding to release them to the public as a tribute to both Alexi and Chuck.

Alexi’s widow and former wife have posted statement’s about Alexi’s life and death in recent days, joining tributes from notable metal musicians — including members of Megadeth, Lamb of God, Testament, and Arch Enemy, to name but a few — which can be found here.

You can read my own musings about Alexi’s passing as well.

Metal Legacies 0
Children of Bodom’s Final Concert Will Be Released as a Live Album
December 15th, 2022 at 3:36pm Hesher Keenan

Metal Sucks Greatest Hits
0 -
Students at British School Sing Iron Maiden’s “Flight of Icarus”
0 -
Video: Dudes Rockin’ Out to Van Halen Meet David Lee Roth, Have No Idea Who He Is
0 -
Viral Drummer Nandi Bushell Pays Tribute to Taylor Hawkins: “Thank You for Looking After Me”
0 -
Just in Time for Passover: Big Four Yarmulkes?!?!
0 -
Meet Ironbunny, the New Babymetal
0 -
What if Black and Death Metal Albums Were Children’s Books?