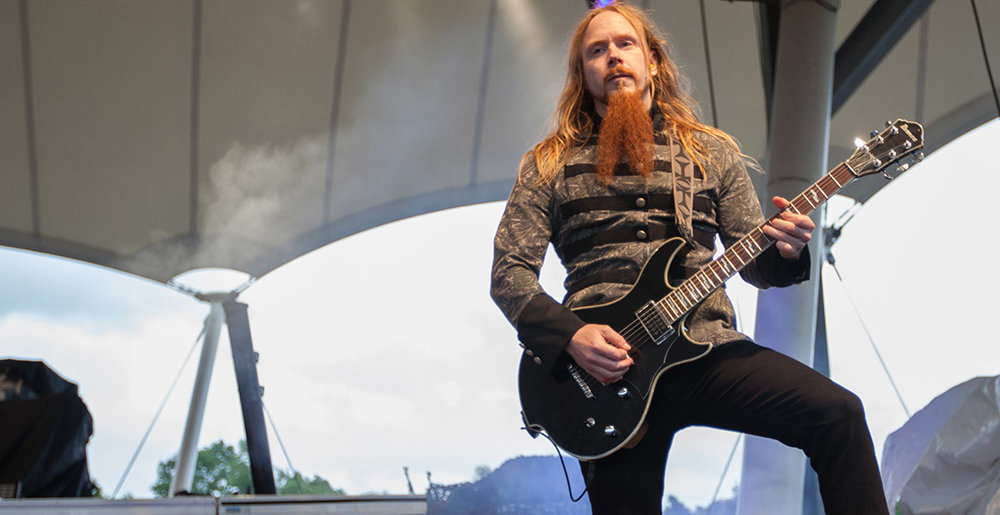 Rikard Sundén, a founding member of Sabaton who played guitar in the band from 1999 until 2012 and most recently performed in Civil War, has been convicted of sexual abuse of an eight-year-old girl and possession of child pornography by a Swedish court.

According to official court documents obtained by MetalSucks (and translated from Swedish using Google), Sundén, who recently changed his name to Johan Andersson, molested his daughter’s friend during an overnight stay. The authorities also seized two computers and a mobile phone belonging to Sundén and found six films of underage children committing sexual acts.

The eight-year-old girl, whose anonymity is protected under the alias “NN3,” says that she slept over with Sundén’s daughter and her family on the night of February 14, 2020, after the two watched the Melodifestivalen, a competition that determines Sweden’s representative in the Eurovision Song Contest. She alleged that Sundén snuck into her room late at night, lifted her blanket and touched her inside her clothes and around her intimate parts. She at first pretended to be asleep while Sundén touched her and lifted her shorts — he had already checked on them twice by that point — but when she eventually moved, Sundén left the room.

Scared and confused, the girl went to the toilet several times to attempt to get the attention of her friend’s mother. When the mother, Sundén’s wife Sigrid, eventually noticed, the girl said she couldn’t sleep, had a stomach ache, and wanted to go home. As it was the middle of the night, Sigrid explained that wasn’t possible, and attempted to comfort her by putting on a “music story” to help her sleep. The girl did not sleep the rest of the night, scared that Sundén would come in again.

Ashamed and scared, the girl kept the incident a secret until she finally told a friend at school several days later. Hesitant to tell the girl’s own mother, the two decided to instead tell the friend’s mother, who of course contacted the girl’s mother upon learning of the incident, who in turn reported it to the police on March 6. The girl gave her testimony to the authorities on March 17, 2020.

Sundén denied the claim of sexual abuse, saying he had simply checked to make sure the girl fell asleep as she seemed to be having trouble doing so inside a makeshift fort that the friends had constructed on the floor. “His theory is that his daughter, who touches herself a lot when she sleeps, has accessed NN3 with her hands and feet in her sleep,” according to his testimony summarized in the court document. “NN3 has since made a mistake and thought it was him. “

In Sigrid’s testimony, she describes the girl “standing in the hall and said that she had a stomach ache and longed for home. [Sigrid] had never seen that reaction before from NN3 when she slept over with them.” She added that “NN3 is a calm, happy and confident girl and a good friend to the daughter” and that in her opinion, the girl is not someone who makes up stories.

The girl’s mother also gave testimony of the event. She noted that “In ordinary cases, NN3 is a fearless and forward girl. She has now changed; she has become like a shadow of herself. She has become insecure. The first 7-8 months [after the incident] she showered several times a day. She stopped sleeping by herself and is scared when she sleeps. At school, she began to freeze and could not respond to charges.” She also noted anxiety, headache and stress rash as symptoms that have afflicted the girl since the incident. A school teacher of the girl’s confirmed via testimony that she had become very withdrawn after the incident.

On the charges of child pornography possession, the document reads:

“Johan Andersson has owned seven child pornographic films. It happened on April 3 2020 at Trotzgatan 90, Falun, Falu municipality. The crime should be considered serious as the films depict children who are particularly exposed to serious sexual coercion and violence and has been exploited in otherwise particularly ruthless ways. Johan Andersson Rikard Sundén committed the act with intent.”

While Sundén admitted to watching child pornography, he denied the files were his, claiming others had access to his computers, including touring bandmates, a previous owner of the desktop computer, and a computer repair person. While he concedes he alone had access to his mobile phone, he contends that he did not believe the subject of the pornographic film stored there to be underage.

MetalSucks has confirmed that Sundén recently changed his legal name to Johan Andersson by cross-referencing publicly available information about Andersson with that of Sundén, as well as an explanation of the name change contained in the court document. He is currently 39 years old, was born on May 5, 1981, and has three children with Sigrid Sundén. The document notes that “He and Sigrid have now separated due to this incident and to protect children so they can have friends at home. He has also changed his name to protect his children in case he is convicted; he does not want them to lose their friends. He has no sexual interest in children.”

The Swedish court found Sundén guilty of one count of child sexual abuse and six counts of possession of child pornography (it could not be verified whether seventh clip depicted an underage girl). He has been sentenced to nine months in prison, and damages totaling SEK 53,400 (roughly $6,240 USD).

An earlier version of this post incorrectly stated Sundén is currently active in the band Civil War. He and the band parted ways in February 2021.