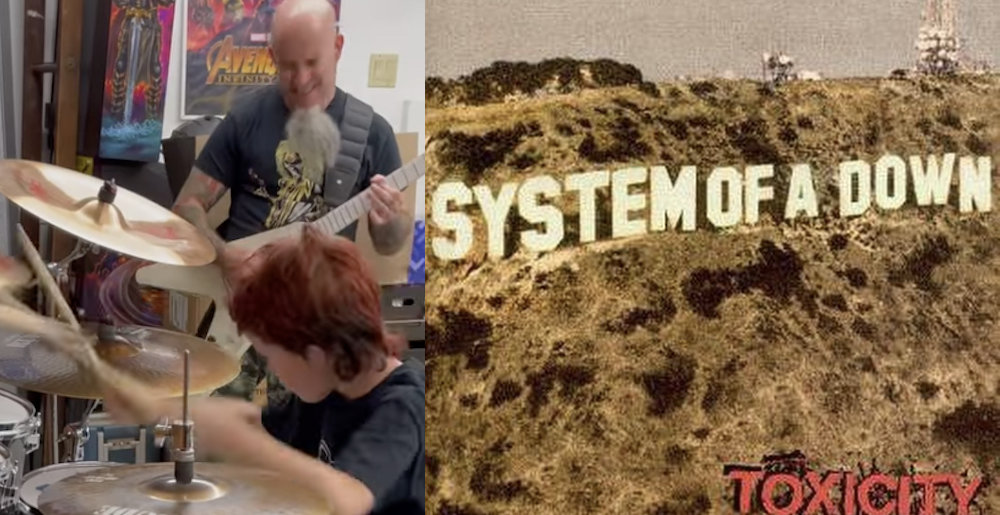 Video: Scott Ian and His 10-Year-Old Son Cover System Of A Down’s “Bounce”

We find Anthrax guitarist Scott Ian‘s cover series with his 10-year-old son and drummer Revel to be extremely sweet. So far, the father-son duo have released jams of “Roots Bloody Roots” off of Sepultura’s 1996 album Roots and “Territory” off of the Brazilian band’s 1993 album Chaos A.D. Now, the twosome have posted another video, this time of the two of them performing “Bounce” off of System of a Down‘s 2001 record Toxicity.

We’ll begin by saying what some of you might be thinking: man, good thing they don’t have a vocalist singing this song’s lyrics. We love “Bounce,” but anyone who’s ever heard the lyrics knows what kind of bouncing vocalist Serj Tankian is referring to, and what kind of “pogo stick” is being used. That’s not exactly the kind of stuff that a 10-year-old kid should be around, at least not on a Zuckerberg-owned platform for fear of shadowbanning. That said, we were into all sorts of tawdry, insane shit when we were ten, so who are we to judge? Just saying it’s a dirty-ass song.

Meanwhile, the Ians definitely did something right, as System’s Shavo Odadjian is in the comments saluting them, not to mention Sepultura’s Andreas Kisser, Dethklok’s Brandon Small, comedian Brian Posehn, and actress Vera Farmiga. It just goes to show that if Revel wants to someday take up the family business, he’s got a lot of people out there who love him for what he does and will support him. Although maybe he’ll go into EDM, shaming his family name forever.

Tags: revel ian, Scott Ian, system of a down

Guess this is the benefit of having so many ex-members of your band.

Metal Sucks Greatest Hits
0 -
36 Seconds of Hell on Earth: Video from the Guitar Center Grand Opening in Times Square
7590 -
If I Read One More Thing About Arcade Fire I Am Going To Puke
2860 -
What is the Best Christian Metal/Hardcore Band???? [you’re moshing 4 Christ]
1510 -
The Top 15 Reasons that Metallica are the Yankees of Metal
400 -
Danzig is Just Cleaning Up His Motherf*cking Bricks, Bitch
270 -
Exclusive Band Meeting Transcript: Morbid Angel Decide to Release Illud Divinum Insanus Remix Album