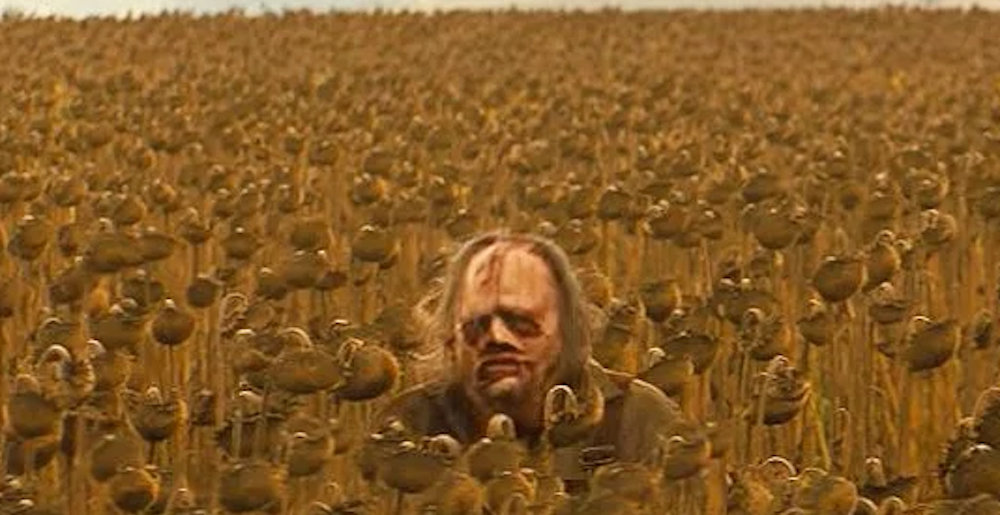 Towards the beginning of Netflix’s new Texas Chainsaw Massacre film, two of the movie’s millennial linchpins throw an old, sick woman out of a house they’ve bought out from under her. The well-dressed, multi-racial 20-somethings are remorseful but merciless after the woman lets loose a racially insensitive remark, calling the sheriff and forcing her monolithic adult son (yeah, you know who) to carry her out as she goes into a coughing fit that eventually kills her. It is implied that the torture they’re later subjected to is justified due to this transgression…and it also sums up the film’s lazy approach and complete ignorance of what made 1974’s The Texas Chain Saw Massacre so powerful.

Where the original Texas Chain Saw is a heart-stopping look into what lies beneath the surface of the world we know, Netflix’s new film, titled simply Texas Chainsaw Massacre, is a series of softball pitches that miss every mark. Out of touch, poorly paced, and never truly scary, the movie is a slog that makes you feel frustrated that someone got paid to write it.

The basic plot of Texas Chainsaw Massacre already feels like a hack screenwriter’s attempt at modernity. A crew of young entrepreneurs, led by a black celebrity chef, have literally bought the Texas town of Harlow to auction off to high bidders and turn into some sort of millennial paradise. While preparing for their party bus of investors to arrive, they evict an old woman and her silent adult son – but when the woman dies on the way to the hospital, her son cuts off her face and snaps back into his alter ego, Leatherface. Now, two of the entrepreneurial crew, a school-shooting survivor and her sister, must make it through a night of terror while Leatherface dices up their influencer friends. Also, Sally Hardesty from the original comes back as a wizened Texas ranger, but mostly just says stupid, melodramatic bullshit.

More than anything, the premise and characters of Texas Chainsaw Massacre just aren’t believable. One notices this from the depiction of the Texan locals, who are all surly blue-collar types sneering at the fashionable young people. But in Tobe Hooper’s original, the locals are really nice to the gang – even Dayton Sawyer, Leatherface’s pa, who wears a big smile as he tells the movie’s victims to go elsewhere. Instead, this time around, we have the chiseled but haggard dude with a gun in his belt who blasts death metal from his truck even though he looks and acts like a guy who loves Toby Keith.

Even worse is the film’s young quartet and their tribe of gentrifiers. Sure, maybe some Austin influencers would buy a town and auction it off to their fellow hipsters – but they’d be there weeks in advance, meeting with locals and law enforcement. They wouldn’t evict the old lady, they’d buy her out and brag online about how altruistic they were. They’d be all about holistically honoring the town’s legacy, because that shit looks good on paper. If there’s anything millennials are good at, it’s planning, PR, and spin.

But that gets at something more problematic in this movie: these millennials are awful cliches from 10 years ago. When the investors arrive in their party bus, they’re all yuppies with faux-hawks sipping craft cocktails. That shit’s tired, and only really exists in the fantasies of out-of-touch horror fans who picked an era of douchebag to stay angry at forever. In the age of Gen Z, making your slasher’s quarry a bunch of precious brunch chefs feels like a nod to arms-crossed diehards who just want to see Leatherface chop up some Instagram assholes.

But even those traditional horror fans will be let down by the depiction of Leatherface herein. The filmmakers, no doubt desperate to cash in on the success of 2018’s Halloween reboot, do their damnedest to make Leatherface an immortal force of slaughter…but that’s not what made that character cool or scary. Leatherface isn’t dastardly or driven, he’s debilitatingly crazy. He’s a gibbering child who knows only pain, meat and family. Trying to bring Sally Hardesty in as some rakish badass to make this a saga does an inherent disservice to the original film’s stark, chaotic insanity (also, a nitpicky note, but when we meet Sally, she’s gutting a pig – after her experience, wouldn’t she be a hardcore vegan? That would’ve shown some thought and character development).

Finally, the gore just blows. None of the kills are cathartic, and the sheer amount of splatter feels unnecessary with how little menace Leatherface exudes. None of the victims are agonized or in pain, they all just gurgle and die; when Leatherface cuts a girl’s stomach open with a knife, you wait for her to writhe in agony, but nope, slumped head, game over. If anything, the amount of blood shed on screen in this film reminds one of how little gore there is in the 1974 original. There didn’t need to be gore, with all the dread and madness it had going for it.

After you first saw Tobe Hooper’s The Texas Chain Saw Massacre, you couldn’t forget it if you tried. The film is, above all else, memorable. But you’ve forgotten Netflix’s installment in the franchise before it’s even over. While 2018’s Halloween reminded fans that sometimes the old ways are better, Texas Chainsaw Massacre is an unfortunate reminder that trying to play a slasher franchise by the numbers is what made slasher franchises so boring in the first place. If you want to plunge into the guts of a classic, the first thing you need to do is find its heart. This? This is all colon, and accordingly, full of shit.

Texas Chainsaw Massacre is available to stream of Netflix.

Here’s to a great holiday weekend barbecue! Why are you salting my thigh?

Metal Sucks Greatest Hits
0 -
Chad Kroeger and Avril Lavigne Finally Wrote a Song So Awful that the Internet Has Collectively Rejected It
0 -
Video: Vocalist Performs Ten Styles of Metal, Complete with Appropriately Silly Lyrics
0 -
Video: Jon Bon Jovi Mangles “Livin’ On A Prayer” During Nashville Show Opener
0 -
It’s Time to Stop Thinking of Women in Metal as WOMEN in Metal
0 -
BREAKING: Some Local Band Called Shrapnel are Tired of You Leaving the Show Before Their Set
0 -
This Very Fat Cat is The Best at Metal Drums