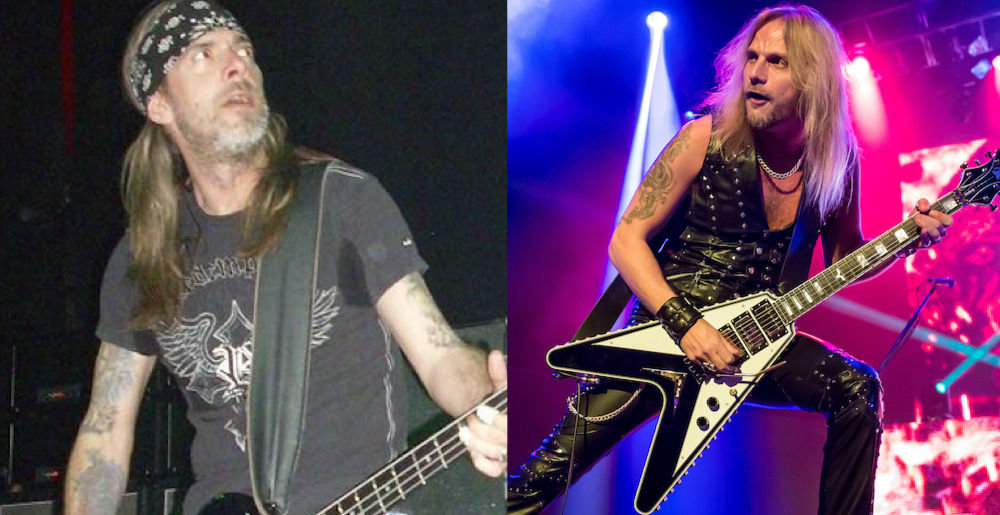 Rex Brown by Mario from Madrid, Richie Faulkner by Ralph Arvesen, via Wikipedia.

One of the most exciting things in metal is when two powerful musicians get together and decide that although they’re brutal on their own, they could combine forces to make a sort of proverbial auditory wrecking ball with which to level our proverbial heads. That statement goes double when these musicians are Judas Priest‘s Richie Faulkner and ex-Pantera bassist Rex Brown.

Brown said on an episode of Tone-Talk that the record is “progressively heavy:”

“I did a record — it’s not out yet — I did it with Richie Faulkner.  Richie and I have become really good friends. And it’s really progressively heavy and cool. Richie is a very melodic player, and then it’s got my drummer that played on my first solo record. They tracked him playing on one of those electronic kits, and they sampled the sounds into a real kit — which I’m not too crazy about; that’s not the way I would do it. But it’s Richie’s record. And he’s got a new singer now. I don’t know when that’s coming out. Those guys are still touring. That was a real thrill.”

Although there aren’t many more details out about the solo project at the moment, Faulkner has stated that the record was something he worked on during COVID downtime. The album will also feature drummer Johnny Kelly (ex-Type O Negative) and an unknown vocalist.

As to how heavily the record will be influenced by Judas Priest, Faulkner said that “you can hear where the roots are, from Priest, but I think it’s different enough to be its own monster.”

So you hyped or what? No word on when the album is going to come out yet, but considering that Faulkner nearly died on stage a few months ago and is already back at it, we’re cool with the wait.

The rescheduled North American leg of Judas Priest’s 50 Heavy Metal Years Tour kicked off this weekend on March 4 and runs through April 11. You watch the episode of Tone-Talk and check the remaining dates below.