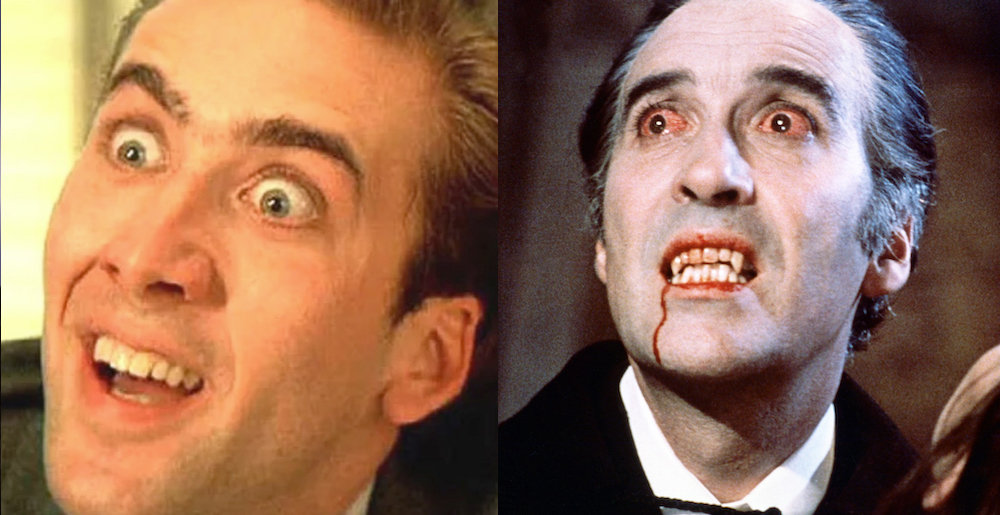 Something you poor, unsuspecting MetalSucks readers are about to find out is just how much I fucking love vampires (as if you didn’t already know).  And while I dig Anne Rice and Blade and all those modern vampire tales, my heart will always belong to the one and only Count Dracula. So I was stoked to learn that renowned actor and meme’ed nutcase Nicolas Cage would be portraying Dracula in Universal’s upcoming horor-comedy Renfield — and now, I’m stoked to give you a first look at the character!

As reported by Bloody Disgusting, our first look at Cage’s Count comes via People Magazine. As you can see in the shots below, Cage is wearing full vampire make-up and an old-school smoking jacket, letting mere mortals like us know that the actor intends to keep his portrayal of the vampire nobleman classic.

That said, the Rage Cage has previously said he wanted to add new physical dimensions to the character, including some of the movement adopted by ghosts in Japanese horror flicks:

“I want it to pop in a unique way from how we’ve seen it played. So I’m thinking to really focus on the movement of the character. You know, I saw Malignant and I thought what she did with those moves — and even Ringu with Sadako [Yamamura]…I want to look at what we can explore with this movement and voice.”

Fucking LOVE IT. The truth is that Count Dracula has gotten some bum steers lately. The BBC/Netflix version was awesome, with Claes Bang doing an excellent rendition of the character, but then it had a twist at the end which ruined the whole fucking thing. That a dude as iconic yet cult as Nicolas Cage wants to add to the villain’s movements speaks to his interesting new take on this classic monster — at least, I hope it does.

Check out the photos below, via People. Renfield comes to theaters April 13th, 2023.

Sponsored Links from Across the Internet
Show Comments
Related Articles
Barbarous Book Club 0
Dracula Daily: New Service E-Mails You Sections of Bram Stoker’s Novel On The Dates They Take Place
May 3rd, 2022 at 10:55am Emperor Rhombus

Read the epistolary novel in bite-size chunks thanks to a new e-mail service.