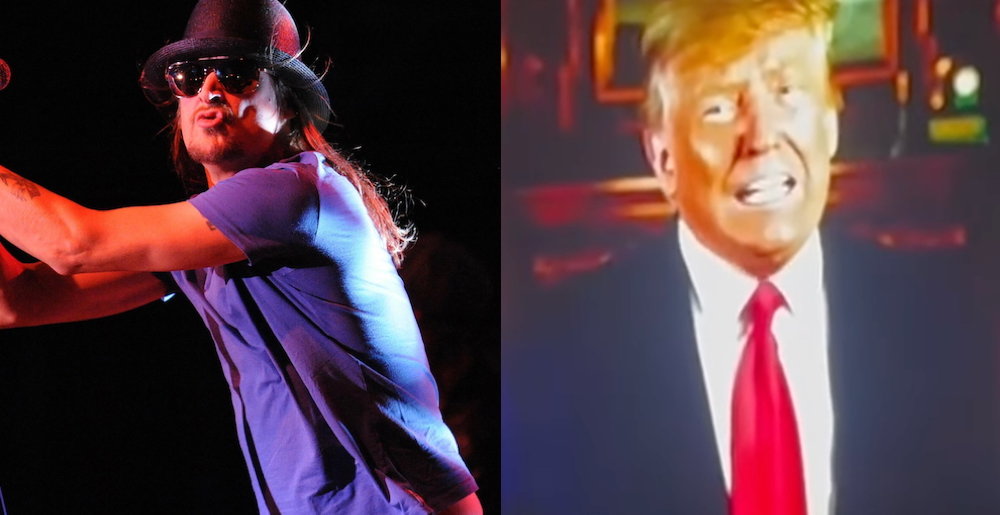 Watch: Kid Rock Opens Show With Video Announcement from Trump: “All of You Are Truly the Backbone Our Great Country”

For those of you who are perhaps unaware, out-of-touch rap-rocker Kid Rock is a big fan of former president Donald Trump. The Romeo, Michigan-raised celebrity has at this point resigned his career to regurgitating Trump’s talking slogans and the memes of his followers in the form of the same laughable song and music video over and over again. Now, Kid Rock has brought Trump in on the game, having the ex-president record a special announcement to be played before his concerts.

As you’ll see in the footage below, it’s pretty clear that Donald Trump has never been to a rock concert before in his life, and if he has, he almost certainly made it very awkward for everyone around him. The guy is frighteningly stiff, he doesn’t know how to close his mouth, and his sentiments fall somewhere between those of a dottering grandpa and random chick on ecstasy who latches onto you at the club. He ends the whole thing by saying, “Make America rock again” in a way that makes you think of the second version of the Wayne’s World song after the show’s been bought.

“Hello, everyone. I love you all. I know you’re having a great time at the Kid Rock concert tonight. Quite frankly, he’s amazing. All of you in attendance are truly the backbone of our great country. Hard-working, God-fearing rock-and-roll patriots. Bob is truly one of the greatest entertainers of our time. Not the best golfer by any means, his golf game could use a little work, but a great, great entertainer, and that’s why you’re there. Let’s all continue to love one another, fight for our God-given freedoms, and most of all, let’s make America rock again.”

You can watch the bizarre, clunky message below:

Metal Sucks Greatest Hits
0 -
36 Seconds of Hell on Earth: Video from the Guitar Center Grand Opening in Times Square
0 -
BREAKING: Joey Jordison Back in Slipknot as Percussionist!
250 -
Worst Year Ever: All of Our 2011 Year-End Sh*t in One Place
0 -
This Very Fat Cat is The Best at Metal Drums
0 -
Video Footage of Emmure’s Frankie Palmeri Getting Electrocuted On Stage in Russia
0 -
Is Facebook Trying to Extort Bands and Brands?