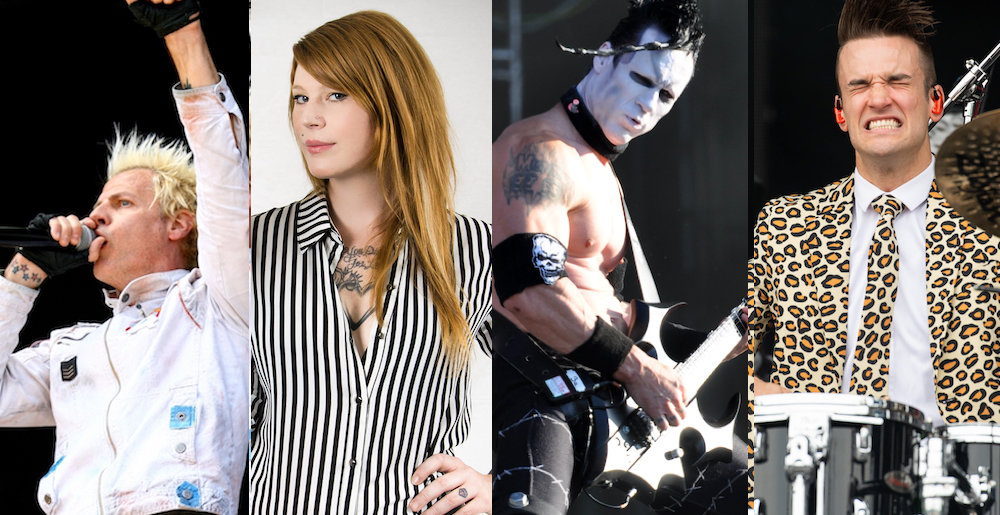 Spider One by Antje Naumann, Doyle by Jonas Rogowski, Arejay Hale by Stefan Brending, via Wikipedia. Mercedes Lander via her Facebook page.

To The Little Brothers and Sisters of Rock and Metal: We Salute You!

I’m a little brother. I’m actually the middle of three, with an older brother and a younger sister. Anyone who sees us together can pick out our birth order pretty instantly – the boss, the weirdo, the baby. But part of how this manifests for me is a vague suspicion of eldest children – motherfuckers always think they’re right because they did it first – and a deep sympathy and appreciation for younger siblings. I know what it’s like to feel invisible, or typecast, or never enough, or like the entire world is a hand-me-down (see, listen to what a fucking drama queen I am – middle child to the max).

If there’s one thing rock and metal are full of, it’s little brothers and sisters. So many of us learned about this music through our older siblings, who played us music or took us to see bands when we were just kids. But the people who amaze me are the young siblings who play in bands or tour with their older siblings, something I’m not sure I could do (no offense to my older brother, who’s one of my best friends, but he’d probably agree that the novelty of living on a tour bus with me would wear off pretty quickly).

And so, to all of those younger brothers and sisters out there in rock, MetalSucks salutes you. We feel your pain and are impressed by your strength. Kudos to you.

To Spider One of Powerman 5000, whose band is about to go on tour opening for his older brother’s solo act. Spider, your disco metal bounces to its own pounding drum, and always will! I’ll be at the Camden date early to make sure I catch you guys!

To Arejay Hale of Halestorm, who has stood by his older sister from the mall portrait days to the arena crowds. Arejay, you’re a fucking diamond, and provide the backbone that Lzzy couldn’t live without. May your fun-ass hard rock drumming be appreciated for its power!

To Mercedes Lander of Kittie, who just rehearsed with her sister for the first time in five years. Mercedes, you’ve proved time and again that little sisters are the lifeblood of long-lasting bands! Keep fighting the good fight!

To Doyle Wolfgang von Frankenstein of The Misfits, who literally towers over his older brother. Doyle, you are proof that young brothers can stomp as hard as their elders! You are the world’s big little monsters!

To Donald Tardy of Obituary, who — damn, a lot of little brother drummers! — who reignited his love of making music with his brother with the help of Andrew W.K. Donald, your fraternal power has made you one of death metal’s greatest percussionists! You’re #1 in our books!

To Mario Duplantier of Gojira, whose has become one of the masters of his craft. Mario, we will literally watch you and just you drum all day long. Thank you for revolutionizing metal!

To Antti Kokko of Kalmah, who is lead guitar over his brother. Antti, you have made swamp metal a thing, whether you meant to or not, and for that, we thank you! We’re here for your compelling-ass riffs!

To Nancy Wilson of Heart, whose guitar licks have made her one of rock’s greatest names. Nancy, you are the little sister to Ann, but you’re the big sister of anyone singing “Barricuda” at karaoke. You fucking rule!

And let’s not paint them all as underdogs — let’s remember the virtuosic younger brothers, too! Eddie Van Halen, Dimebag Darrell, Iggor Cavalera, Angus Young — all of you fucking rule, and stand as shining examples of how little brothers everywhere can conquer the world! Never stop being our patron saints!

To all of these younger siblings in rock and metal, and to any others we might have missed — MetalSucks salutes you! Don’t believe the Eldest Child propaganda! You fucking RULE!

Reunion Mania 0
Kittie Took the Stage for the First Time in Five Years, Peep the Fan Footage
September 9th, 2022 at 9:33am Hesher Keenan

They sound pretty good, considering their long time away from the stage.