Metal Sucks
Metal Sucks Ted Nugent: Media, Leakers, and “Those That Are... The Darkness’ Justin Hawkins on Jon Bon Jovi:...
- Tweet SHARE
Enlarge
...And F*ck You Too 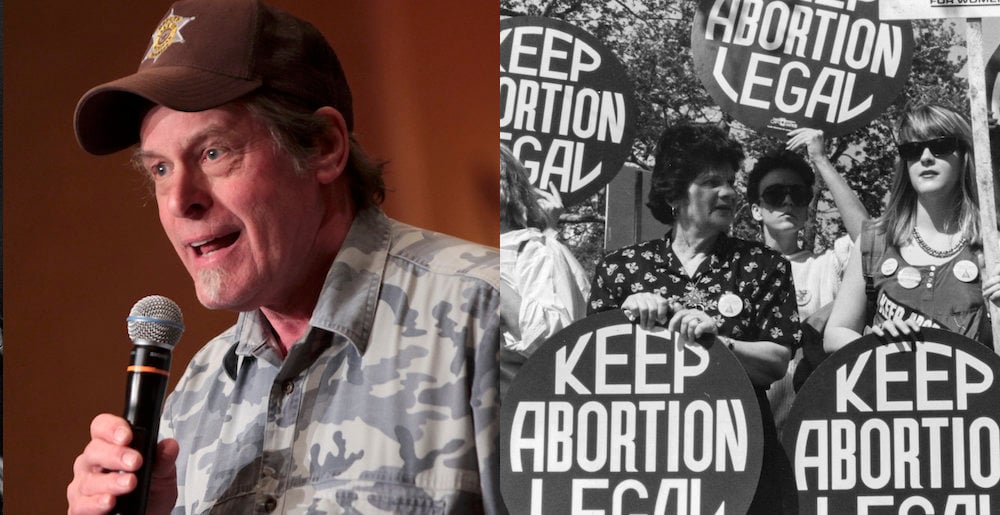 Ted Nugent: Media, Leakers, and “Those That Are Against the Right to Life” Are the Real Problems In Roe v. Wade Overturn

Last week, the Supreme Court quietly introduced plans to overturn landmark court decision Roe v. Wade, which protects a woman’s right to have an abortion in the United States. This led to countless conservative politicians introducing state laws that would make getting an abortion a criminal offense; meanwhile, members of the metal community including Disturbed’s David Draiman and Rage Against The Machine vocally supported a woman’s right to choose. But unsurprisingly, conservative rocker and heartless cretin Ted Nugent thinks the real problem here isn’t the fact that women will die getting unsafe abortions — it’s that the media and leakers are hurting America!

Here’s what Ted said in his latest rant, as transcribed by Blabbermouth:

“Well, number one, we don’t have to look far anytime, any day in these treacherous times in America that those that are against the right to life — that’s really what it all boils down to, doesn’t it? And as we celebrate Mother’s Day, I think it has a lot to do with maternal instincts, responsibilities and morality.

“So those that misinter…Well, I was gonna use the term ‘misinterpret,’ but that’s much too generous. It’s just like the ‘Don’t Say Gay’ bill that had nothing to do with that. It’s just like the ‘Black Lives Matter’ terrorists that really, clearly, by all evidence, don’t care about black lives. And those that are attacking this recent…

“There’s two issues: the leak is a crime and somebody needs to be brought to justice; but two, the leak wasn’t about ending Roe v. Wade; it was about taking a step back and identifying that the court didn’t have the legal authority to determine that 50 years ago. And meanwhile, everybody’s screaming that abortions are now banned.

“These are the maniac days of dishonesty, and it’s manifested by fact checkers who are allergic to facts. Facts, truth, logic and common sense is Kryptonite to the left.

“So, good Americans must organize, and we must stand up and make sure that we let our elected employees and our friends and neighbors and people at church and school and work and around the campfire know that the megaphone of the media is one big toxic lie.

So, twice Ted has harped on this idea — Guys, it’s not about banning abortions! GEEZ! So what IS overturning Roe v. Wade about? Why’d Ted kick this off with a right-to-life spiel?

This is a common tactic right now — when you bring up the consequences of a political decision, it’s supporters roll their eyes, say, It’s not ABOUT THAT. Then when you ask for an explanation, they shake their heads and play it off like if you have to ask, you’ll never know. It’s some real bullshit, is what it is.

“…it’s just reviewing that the last legal consideration was unconstitutional. We’ve gotta get back to the Constitution. So I’m a big constitutionalist guy.

“So we need to find out who the leaker was and bring them to trial. And we need to try to get past the lies of the left that it’s not about banning abortions; it’s about reviewing the Roe v. Wade decision.”

Let’s ask this: what if it was a gun? I mean, if we use pro-gun logic, outlawing abortions won’t stop abortions, it just means only outlaws will practice abortions, right? Meanwhile, why does the government have no business telling you which death machine you can use, but can tell a woman what she can do with her body? We’d urge Ted to do some critical thinking here, but come on, like that’ll happen.

Watch the video below. And if you want to know why we keep covering Ted Nugent, we actually wrote an entire fuckin’ piece about it.