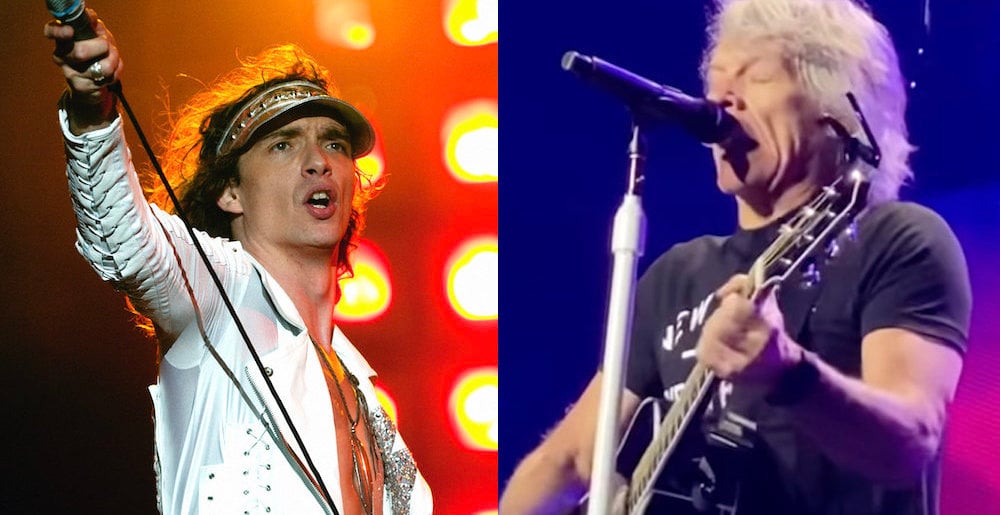 The Darkness’ Justin Hawkins on Jon Bon Jovi: “The People Around Him Need to Tell Him to Stop”

A couple of weeks ago, we posted a video in which Bon Jovi frontman Jon Bon Jovi was visibly struggling to sing the band’s classic “Wanted Dead or Alive.” We posited that there might be a lot going on here — was Jon Bon wasted? Was he sick? Now, Justin Hawkins of the British rock band The Darkness has said that he thinks Bon Jovi needs to do the right thing and take a break until he can figure out what’s going on.

In a new video shared on his channel, Hawkins said the following (as transcribed by Blabbermouth):

“My career is not as long as Jon Bon Jovi’s, and not as big as well. Even at the level that we’ve experienced, if you’re in a situation like that and you can’t deliver the goods and you can’t give your audience what they deserve, that’s horrible — it’s a horrible feeling — and you don’t enjoy touring in that condition; you just wanna go home. And I expect he’s feeling the same way, really. But there must be a huge machine around Bon Jovi that stops him from being able to pull the plug on it, really, which is what needs to happen, I think. I mean, I’m not talking about pull the plug forever.

“It sounds like he needs some kind of therapy. And I think a lot of the time, a situation like that… It doesn’t sound like it’s a polyp or some sort of lump on his vocal cords ’cause that would be more unpredictable — he would be hitting the notes and then it would squeak off and it would do something unexpected. You know that sort of sound when you’re entering puberty and your voice becomes unpredictable. Sometimes when you have a growth or a lump on your vocal cords, it can cause that kind of… Unexpected things happen to your voice. Even if you’re an experienced singer and you can just hold a note, it will squeak off when you’re not expecting it, and it’s very hard to sing around those things. But that’s not what’s happening here. This sounds like he’s super tired. Everything’s [tuned] down, but he’s still… You have to sing a lot with an adjusted key like that to find the sort of muscle memory in your vocal cords anyway, but he’s struggling with that, not because it’s low; it’s just ’cause he’s tired. And I think he’s psychologically… I don’t know… It sounds like something he’s gonna need some therapy with — actually talk to somebody and try and coax the performances back out. It doesn’t sound to me like there’s damage in there. I’m not a doctor but I’ve experienced voice problems before. And to hold a note with it being off key suggests some pitching issues that might be to do with hearing as well.

“It’s not fun to watch this and it isn’t fun to regard one of the greats. He’s a great singer — he always has been — but this sounds like something is eating away at him from the inside. And I don’t think it’s a voice injury; I think it’s more of something like a manifestation of performance anxiety that’s stopping him from delivering his trademark Gale Force 10 mega vocal that you need on these huge tracks, these anthemic mega hits. And I feel like the people around him need to tell him to stop. It must be difficult when…

“I suppose if you’re afraid of getting the sack, I suppose it’s difficult to talk to a singer in that way. I don’t know what the dynamic is in their organization, but I think if I was working for Jon Bon Jovi and I cared about the ‘brand,’ I would ask him to consider canceling the tour and getting some medical attention.

“It saddens me to see it. I’m sure we’re all disappointed.”

On the one hand, you could argue that Hawkins doesn’t really know what he’s talking about…except he sort of sounds like he does. And let’s be honest, he’s saying what we’re all thinking.

Check out Justin’s video below, followed by the original video of Bon Jovi:

Such played on all of the band’s famous ’80s material.

Metal Sucks Greatest Hits
250 -
Worst Year Ever: All of Our 2011 Year-End Sh*t in One Place
0 -
Give a Heavy Metal Valentine’s Day Card to Someone You Love
1860 -
The Top 25 Modern Metal Guitarists: The Entire List in One Place
540 -
Glenn Danzig Shops for His Own Kitty Litter
0 -
Chad Kroeger and Avril Lavigne Finally Wrote a Song So Awful that the Internet Has Collectively Rejected It
0 -
What Will Happen When a Member of Metallica Dies?