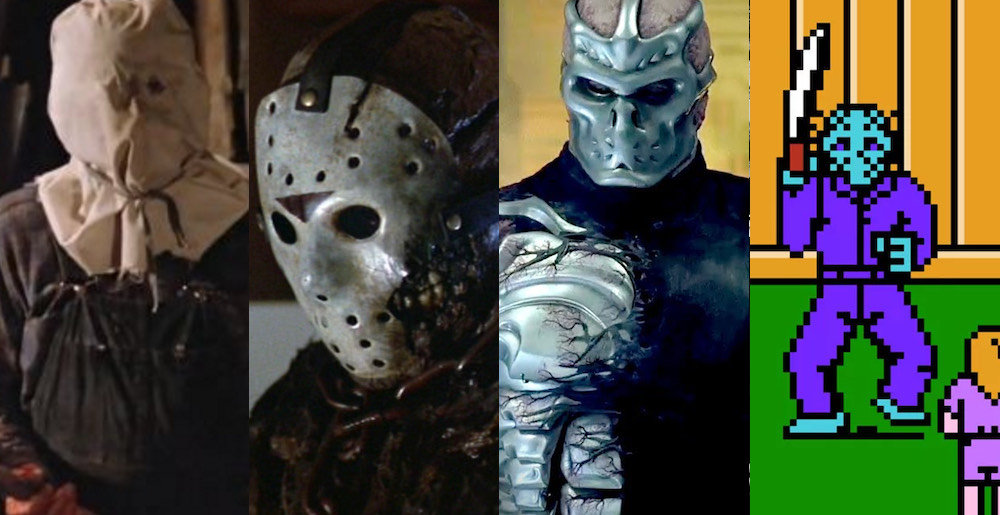 The 13 Incarnations of Jason Voorhees, Ranked by How Metal They Are

Today is Friday the 13th, a day traditionally marred with bad luck and superstition. And for the residents of Cunningham County, New Jersey, the day is one of misery and terror. On this day, Jason Voorhees, a young boy who allegedly drowned, avenged his mother as an adult, and then rose from the grave, emerges from the woods to terrorize anyone who visits Camp Crystal Lake, the site of his death. And for the past four decades, via the Friday the 13th franchise, this hockey-masked force of bloodshed has haunted the dreams of millions the world over.

That said, we can all admit that while Jason is awesome, he’s not always super metal. The problem with being one of pop culture’s most recognizable characters is that everyone is always trying to reimagine you or make you hip and current, which usually results in some terrible versions of our favorite fictional murderer. So in honor of the day, we decided to rank the incarnations of Jason based on how hard they rip out our metal hearts.

Fuck you, blue triangle Jason! Your twist ending – that, spoilers, you are not actually Jason but a dude in disguise – ruins this entire fucking movie. Never settle for a movie that reveals that the awesome killer is some motive-driven imitator. WACK. Plus, this list is cooler if we only have 13 official entries!

Now, onto the official ranking:

Well, obviously. Jason’s just an ugly kid launching out of the water in the original, grabbing an unsuspecting counselor in this one. Obviously, this incarnation would be the least metal, because, you know, it’s not an unholy killing machine. Moving on.

We’re actually pretty big fans of Freddy vs. Jason, but we’ll be the first to tell you it has flaws. Jason is pretty traditional for the most part, and keeps up his end of the bargain when fighting Freddy – but when he’s in his dreams, he’s a big weenie who ends up a sniveling child on the boiler room floor. Maybe this is why we prefer him as an expressionless monolith.

With Friday the 13th Part VIII: Jason Takes Manhattan, the character’s zombie-ness is really toned down, and his slimy outfit makes him just look like he’s dressed in black. But even worse is him popping out of mirrors full of fake smoke and blinking lights. Then, when his mask is taken off, he’s just a weird turnip-headed goon with a child’s voice. Sorry, but low on the list, no question.

The reason this one is so far down here, but isn’t at the very end, is because he’s just bad, but not terrible. The remake was a mishmash of previous Friday plot elements, and as such, its Jason is sort of an all-purpose version of the character. So, while more of an homage to the character than an original take, this version doesn’t land dead last.

I’m sorry, but we love this fucking thing. The fact that the people at Nintendo took the ultimate force of cinematic murder and turned him into a character from Mike Tyson’s Punch-Out is just too hilarious. Plus, the color scheme is amazing. We’re here for neon blue Jason.

In the annals of the Friday franchise, Friday the 13th 3-D will mostly be remembered as the movie in which Jason finally dawns his telltale hockey mask (and kills that whiny bitch Shelly). But this incarnation also really dictates who Jason would become. With this movie, we got the hulking, blank-eyed figure staring impersonally at the bodies he made for mommy. So yeah, mid-list, worth it.

If you told me Friday the 13th Part IV: The Final Chapter was the best movie of the series, I’d hear you out. A large part of that is the Jason we get, who’s at this point officially an undead monster. Whether or not he actually is yet in the lore is unclear, but here, he’s got the Tom’s Savini disfigured face, we get the the machete wound in the forehead – all the good stuff. Here’s where the tide turns and the series becomes the cultural landmark it truly is.

Look, we can all agree that Jason X sucks in a lot of ways. Like, guys, stop trying to make that robot chick out to be sexy. But at a certain point of this movie – surprisingly late, for the record, Takes Manhattan style – Jason is literally made of metal. That automatically vaults this turd of a movie a few levels up on this list.

We’re not sure about Tom Savaini’s Ash – a little Clive Barker-y for our tastes – but man, his Jason is fucking awesome. He’s still a full-on demon creature from Hell, but the golem-like shell Savini gives him maintains the character’s stony, unmovable nature. Dude, put this thing in a movie any fucking day, we’d watch it.

Now we’re talking. That opening of Part IV, of Jason in the coffin being struck by lightning, bringing him back to life with fence post in hand – that’s Jason Voorhees as we’ll remember him forevermore. Now he’s a zombie, immortally driven only to kill, impossible to slay. That shit would haunt our nightmares from here on out.

Look at this gross-ass motherfucker. Look at his hockey mask lodged in his bloated, demonic head. By now, there’s none of the old-school man-in-a-mask class left in the character – he’s just a bulbous avatar of hatred whose very presence makes you want to literally eat his heart. Metal as fuck.

While Jason Lives brought Jason back to life, it was New Blood which gave us the monster in its ultimate form. Waterlogged, chained, with just a hint of that skull poking out, the seventh film’s incarnation is, simply put, the one we see in our heads. Because of this, it’s almost like Jason as Iron Maiden’s Eddie, both creepy-crawly and simply iconic. Who cares if he’s battling psychic ghosts or whatever?

Talk about breaking your heart…!

As a headbanger who loves horror movies, I’ve come to […]