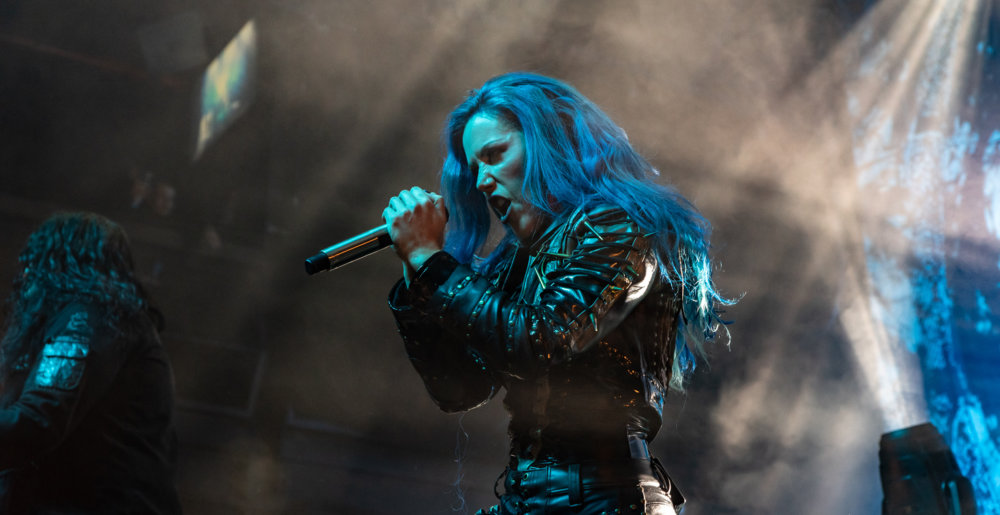 July will see Swedish melodic death metallers Arch Enemy drop their new full-length album, Deceivers. So far, the band have released several singles from the album, from the rip-roaring “Deceiver, Deceiver” to the theatrical “House of Mirrors” the mid-paced “Handshake With Hell”. Now, the band have dropped a fourth single, this one called “Sunset Over the Empire,” and on this track, they’re going full apocalyptic.

What’s notable on “Sunset Over the Empire,” surprisingly enough, are vocalist Alissa White-Gluz’s lyrics. With a lot of death metal, the vocals become a percussive instrument, and even a band with as prominent a vocal mix as Arch Enemy often have their words swept up in the gale. But here, amidst a sturdy melodeath song, White-Gluz’s lyrics about watching the world sink under its own weight really stand out.

Guitarist Michael Amott says the following of the track:

“Behold the ‘Sunset Over The Empire’, the 4th single from our upcoming Deceivers album! This is a faster song with some manic riffs and a relentless beat that I can envision becoming a ‘hit in the pit’! Lyrically, it’s sadly one of those that seems to ring more true with each and every passing day nowadays…’Words turned to war, brother fighting brother, another false truce, as the people die…’. The accompanying video was shot in Poland with the Grupa13 team and doesn’t follow the lyrics slavishly but has a great message and vibe in its own right. Oh, and I’m stoked that we’re releasing ‘Sunset Over The Empire’ as a limited edition physical single on 7″ vinyl!”

Check out “Sunset Over the Empire” below, and scroll down for album details. The video premieres in a few hours, but you can set your reminders below.