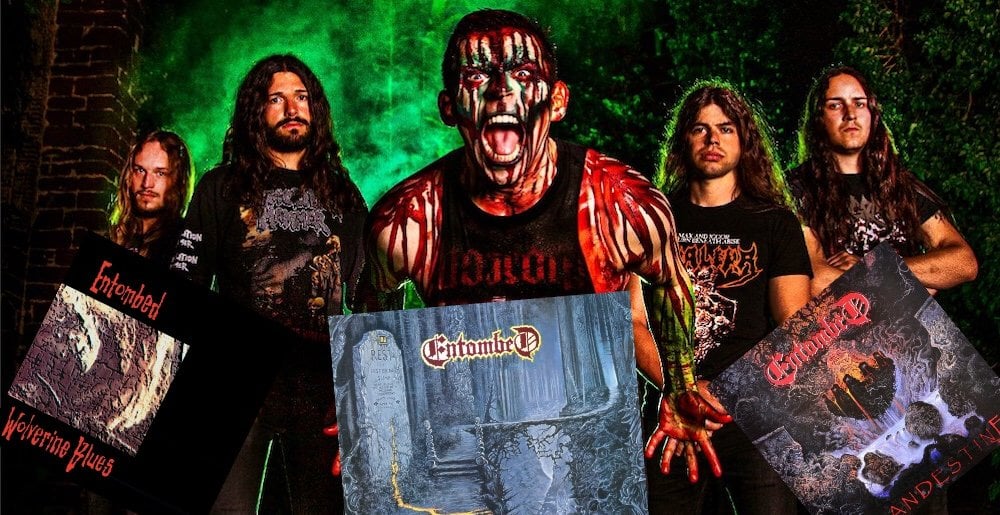 Right now, Belgium’s Carnation are one of death metal’s most exciting bands, bringing a mixture of delicious riffage and unstoppable forward momentum to everything they do. But the band know their history, and on their new vinyl single “Stench of Death,” they’ve included a B-side cover of Entombed‘s “Supposed to Rot.” For guitarist Jonathan Verstrepen, the Swedish melodeath band were a necessary inclusion in any teenage metalhead’s diet.

“Going back to the high- chool days and discovering my first death metal bands, I can remember it was Entombed’s Left Hand Path that had the most impact on me,” recalls Verstrepen. “The album still is revolutionary to this day. This was it! The album was real and filthy like death metal should be! LG’s from-out-of-the-grave vocals were just the cheese on an already tasty pizza! Entombed created a whole new genre which still is hot nowadays. If you think of bands like Black Breath, Gatecreeper, Bloodbath and so many others that are heavily influenced by the sound Entombed created back in the days. And the Carnation story is not that different.”

Verstrepen goes on to say that Left Hand Path wasn’t just an influence on Carnation, but an absolutely crucial part of his own sonic development. “After my first listen of Left Hand Path, I started searching to get that exact same sound (which we modernized a little bit over the years) and started writing my first death metal songs, which became the first Carnation EP after three years.

“Even after almost 10 years of the band Carnation, we still are very much influenced by Entombed,” he continues, “but in a different way than the first recordings. The new album will be more dark and melodically evil, but we still like to write some more old-school/death ‘n’ roll songs from time to time. Our new single ‘Stench of Death’ is like one of these songs!”

In honor of his band adding to Entombed’s legacy of face-peelingly awesome death metal, we asked Jonathan to give us his five favorite Entombed songs. Here’s what he dug up:

“From Entombed’s third album, this song got that typical death ‘n’ roll vibe that created a new form of death metal.”

“This song is simple and pure. LG’s voice isn’t from this planet, right?”

“Maybe the coolest and most aggressive HM-2 intro part for a song?”

“I think it’s hard to choose another #1 Entombed song. This one has it all! A brutal intro and a beautiful mid/end part, which is pure horror!”

Be thankful there’s no smell-o-vision technology.