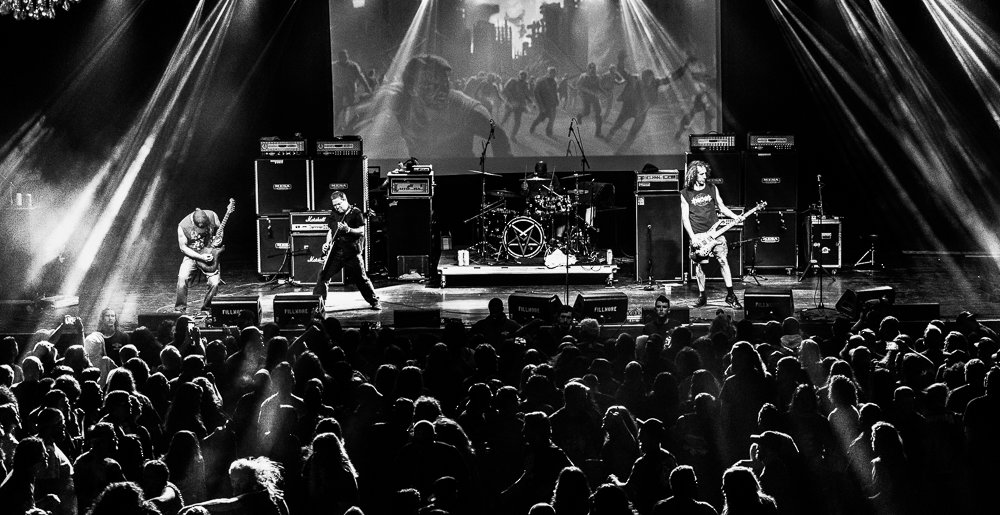 Stop me if you’ve heard this before, but classic thrash/crossover act Nuclear Assault have broken up. Earlier today, the band posted a photo of a tombstone with their logo and the dates 1985-2022 on it before deleting their Facebook page altogether. Because that’s how band break ups are announced in 2022.

Long-time fans of the band won’t be surprised by this revelation, since it’s officially the band’s fourth time calling it quits. They first split up in 1995, then got back together in 1997 before parting ways again the following year. Then, the band eventually got back together in 2001, only for things to go belly up again in 2008. This most recent iteration of Nuclear Assault, featuring bassist Dan Lilker, drummer Glenn Evans, and guitarist/vocalist John Connelly and guitarist Erik Burke, mostly came together in 2011.

Normally, here’s where we’d share an official statement on the band’s decision to break up, but there hasn’t been one. The band hasn’t updated their Twitter or Instagram pages in forever and their Facebook page doesn’t exist anymore, so the typical avenues that a band would use to make their decision public aren’t exactly available.

The only thing we’ve gotten in the hours since their announcement is a Facebook comment by Erik Burke, where he says “Nuke is no more, unfortunately” in response to someone suggesting the band play a show in Canada.

Truth be told, this also shouldn’t come as a surprise since Lilker said earlier this year that their show at Decibel’s Metal & Beer Fest would be their last U.S. show

“We’re going to be pretty much wrapping it up. Nobody is getting any younger. People have commitments and families and stuff like that. I’ve been to a couple of the Metal & Beer Fests and I was usually pouring or just hanging out and drinking or something. So, I think it’s truly cool to be able to do this and I’m not kissing your ass here, at a nice, prestigious American metal festival. Also, I like beer. In all seriousness, it will be cool playing one of these. Like I said, I’ve been to a couple and when I go backstage and bullshit with people, I feel like, ‘Shouldn’t I be doing something?’ I think it should be a lot of fun and that might be our last U.S. show, actually.”

Given the fact that they’ve done this before, we’ll see if this break up actually sticks. As for now, however, Nuclear Assault is no more.

Worst Week Ever 0
Elvira Defends Rob Zombie’s Wife, Rollins Knows a Comeback Would Be a Cash Grab, and More Top Stories of the Week
April 2nd, 2022 at 9:02am Emperor Rhombus

Lost in the Mosh 0
Nuclear Assault’s Danny Lilker Says Decibel’s Metal & Beer Fest Might Be Their Last U.S. Show: “Nobody Is Getting Any Younger…”
March 30th, 2022 at 9:40am Emperor Rhombus

That’s a real as hell take, to be sure.