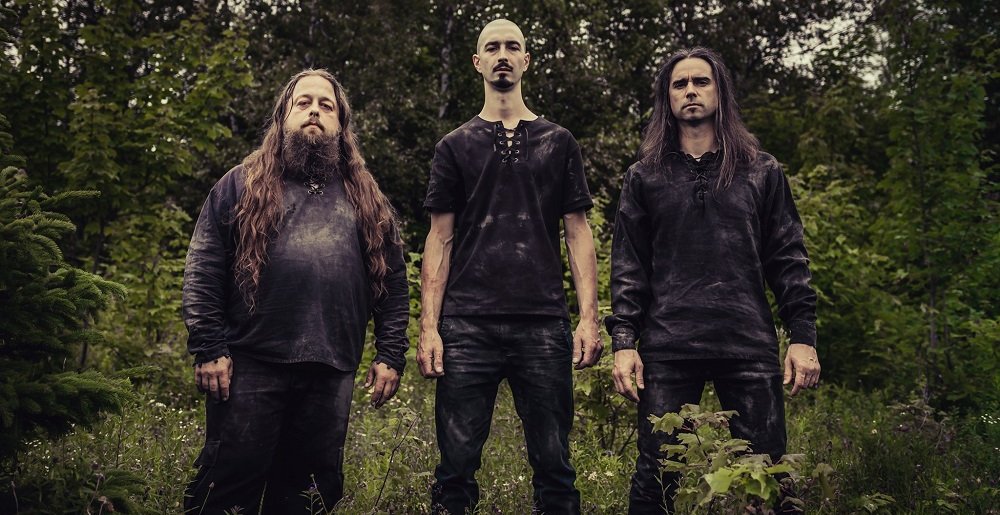 When you think of Canadian black metal bands, one from Quebec is probably the first one that comes to mind, and with good reason. The province has been a hot pot of a scene, with bands simmering and soaking among each other to form a sound and aesthetic that’s undeniably French-Canadian. Early bands such as Tenebrae and Frozen Shadows relied more on the already defined Norwegian sound, though later, musicians influenced by the climate, folk tales and sometimes nationalism or even separatism started to emerge. These bands have affected not only Canadian black metal, but scenes the world round, with releases being put out on German, Australian and Chinese labels.

Besides the bands, let’s not forget labels like Sepulchral Productions and festivals like Montreal’s Messe des Morts which have been key in promoting these artists. Let’s take a look at a handful of bands which put Quebec on the black metal map.

At least six bands have the name Necronimicon, but this legendary Quebecois black metal trio is the only one you need to learn today. 1988 was the year this book was opened, with the demo Morbid Ritual coming out in 1992. The band has continued on with more rituals since, keeping their theme shrouded in occultism, magick and Lovecraftian horror with albums like Rise of the Elder Ones. Rob “The Witch” Tremblay is the sole original member here, though current members Raum and Morgul make sure Necronomicon remains an awesome force. OKKULTIS IN MUZIKA.

Now celebrating their 25th anniversary as a band, Sorcier des Glaces or “Wizard of Ice” represent quintessential Quebec City-made black metal. Beginning with the charming Snowland in 1998, the band has chiseled their legacy out of ice with atmospheric, almost magical releases including the recently released Ghastly Memories EP.

Black Metal Satanique Québecois. Monarque, emerging in 2003 and once belonging to the Triskalyon collective in 2007, are another band of high importance when observing the Quebec-based legion of musicians performing this style. Their second album, Ad Nauseam, is a perfect entry point to the band and the Quebec scene as a whole – cold, slick and malevolent.

The verminous aesthetic of black metal manifests itself in some bands who use the pest as a symbol of virtue. Quebec City’s Délétère give the listener a few Les heures de la peste or “Hours of the Plague” to stick in their ears. Medieval, modern – the centipede has legs like the day is long and Délétère continue to ride the insect onward.

Csejthe from Quebec City came into being in 2006 and focus their black metal output on themes such as occultism, horror and medieval history, including their namesake, which is the castle Countess Bathory murdered girls throughout her life. The band’s output is all well-worth exploring, with a highlight being their Réminiscence album from 2013. Their sound has changed somewhat throughout the years, though their grasp on icy horror remains firm.

Perhaps the proudest band located in Quebec are Forteresse, whom use black metal as a backdrop to tales of history, nationalism and even separatism. In 2006, they released Métal noir québécois, a symbolic title which would be the first of many calls-to-arms, including Thèmes Pour la Rébellion. Showing a building in Quebec in flames on the cover, it’s sure to instigate a feeling of a resistance within, even if you aren’t French Canadian.

Featuring members of Chasse-Galerie, Délétère and Forteresse, Cantique Lépreux emerged out of Quebec City in 2014 and through leprous eyes, with a toque above them and scarf below, the band focuses on grim tales set in the world of winter. Their album Cendres Célestes pits you right into the eye of the storm. “Cachés dans la tempête; l’égarement, les bètes, la peur et le froid. Nul refuge dans la forêt hostile, que l’espoir de voir le jour renaître.”

O.T. and Néant make up the longstanding Montreal-based band Akitsa. The former meaning “Outre-Tombe” or “beyond the grave” while the latter translates to “emptiness” or “nothingness.” Akitsa have been at it since 1999, bringing forth a punk attitude cooperating with a second wave of black metal spirit. The band is always evolving, having some industrial tones in earlier work, though with the band’s move to Profound Lore has seen the band produce a focused, buzz-saw guitar-driven, Darkthrone-shaded album with Credo.

Since its beginning in 2006 releasing discs from local bands like Be Persecuted, China’s Pest Productions has expanded their roster to include bands from several countries. Canada is of course included and Quebec’s Nordicwinter is a band with Pest firmly in its corner. Comprised of the single musician Evillair (also of Autumn’s Tomb, Graven Dusk and Kalseroth), Nordicwinter promises a soul-shifting, atmospheric journey in below-freezing temperatures on albums like Beneath the Fleeting Light and Sorrow.

Another member of China’s Pest Productions label and the Metal Noir Quebecois circle, Crépuscule is another one-manned project (Bardunor) and a hidden gem in a scene full of talent. Le Gardien Des Clefs (The Keeper of Keys) is his second album of atmospheric black metal. Coming out in 2021, it marked 10 years since the release of his debut, being harsh and wild in spirit yet meticulously crafted – much like an ice sculpture of a war-torn castle.

Continuing our deep dive into Canadian metal, here’s some bands in the extreme metal vein!

Take a trip back to the good ol’ days in the Great White North.

Metal Sucks Greatest Hits
0 -
Avril Lavigne Must Be Stopped
0 -
Navy SEAL Team Six Member: “I Wore My Demon Hunter Patch When I Blasted Osama bin Laden”
0 -
Ten Reasons Why Record Labels Are Still Important
0 -
Thirty of the Worst Metal Band Promo Photos of All Time
0 -
11 Bands You’d Get Made Fun Of for Liking Back In The Day
0 -
Chris Brown Thinks Municipal Waste are a Fashion Statement