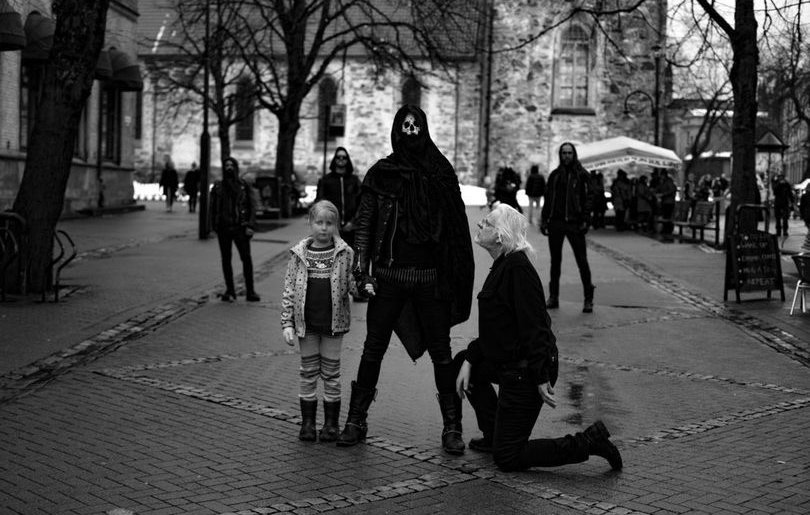 When it comes to finding the Nidrosian black metal powerhouse that is infinitely SUPERIOR to whatever you’re listening to right now, look no further than Ritual Death. When their magnificent self-titled debut album dropped on December 2, it felt like we were watching black metal history unfold. This masterpiece features an all-star lineup: Wraath on guitar and vocals, Nosophoros on drums, H. Tvedt on keyboards, and Lord Nathas on bass and backing vocals.

I don’t remember becoming so enthused about a release as when the single “Lunae” first unleashed its pure black energy. Ritual Death knocks you out with an overwhelming sense of truth that’s usually reserved for the classics. For the most part, the only records with atmosphere this awe-inspiring are from the members’ other projects. Since forming in 2016, Ritual Death has bewitched us with several other 10/10 offerings: two self-titled EPs, two splits, and a compilation called El Señor de la Tumba.

On Ritual Death, Wraath — who you may also know as Luctus and Afgrundsprofet, or simply W. — proves that he is still the most exciting frontman around. The insanely brilliant and prolific musician brings the fire like no other. Wraath actually has my favorite resume in metal, which includes Celestial Bloodshed; Mare; Behexen; One Tail, One Head; Beyond Man; Dark Sonority; Darvaza; Fides Inversa; Kaosritual; and a whole lot more.

We are beyond grateful to have had the rare privilege to speak with Wraath right before he set off on Ritual Death’s current European tour. Without further ado, we present our discussion:

Obviously, your members have been involved in so many incredible projects, but Ritual Death has a totally unique sound that always leaves me speechless. Could you please tell us about the genesis of Ritual Death?

Yeah, Ritual Death started because we were tired of waiting for other projects to happen, so we just wanted to start something primitive down to the core, but still with a very serious approach. Like how simple can we do it but still stay honest and not do another “tribute to old-school”-project?! We still wanted to keep what’s “us” — like the burning flame. Nosophoros and I were boiling with inspiration and frustration combined with many nights listening to old demos and obscure death metal: We were then listening to Rotting Christ demos, Swedish black metal, Archgoat, Black Witchery, The Black — just going straight to the core of the pounding hard darkness. And from that, the first 7” was made in probably a month. We just made all that. Again, we wanted to keep it super simple — just guitar, drums, a little keyboards and vocals. We were just going on pure will! You can hear it! It has this real wild uncontrolled burst of emotions and satanic will power. We just wanted to go after it. And in that moment Ritual Death created itself you could say.

Congratulations on the premiere of your debut album on December 2! Of course, it’s totally mind-blowing like all of your past releases. Could you please tell me about the writing process?

Thank you. Yeah, it was written over the course of some years because everyone is so busy. So, we just collected pieces here and there. But then, when we signed to Shadow Records, I pretty much decided that now we have to make a push for it. So, we just gathered all the ideas we had. This album was mostly written by me because I was inspired or took actions to become inspired! And I went through some shit in my life and that just added to the darkness that just kept creeping in. Ritual Death just has this really heavy darkness. So, that came over me. The last songs were written like 4 weeks before going into the studio. Yeah, a really intense period with everything. I had help with one missing lyric the day before going to the studio from Hoath Torog from Behexen. He helped me at the last second because I was lost. I couldn’t find the words. So, again, it was a matter of just gathering a lot of material from the last few years. Like the intro for “Salomes Dance” — I had that on my phone. I had that recorded for probably five years just wondering what to do with it or if it should be made into a whole song. But suddenly, it fell into place when we were in the studio, and I ended up using the same phone recording as intro.

You’ve said that you like to try to record as much as you can live, which I think is really important. How did everything go in the studio?

Pretty smoothly. As smoothly as it could go. Of course, there were some small technical problems, but nothing much. We’re so used to what we need to do in order to keep the atmosphere and in order to keep ourselves honest. — We like to record the guitar and drums at the same time. That’s how we communicate, me and the drummer [Nosophoros]. We don’t do the click [track]. And we just want it to be pure and honest. So, if there’s a mistake, we just leave it. It’s more like the old-school way of doing stuff. You get the rawness, and it feels more honest in my opinion.

I agree! Definitely. So, prior to Ritual Death, all your members had already worked together, except Lord Nathas who joined a bit later. Obviously, the two of you are now collaborating in Fides Inversa, which I highly recommend to all readers. I really enjoyed your guest vocals on Redemptio with Nathas’ band Funeral Harvest! And of course, Nathas made a great guest appearance on Beyond Man’s fantastic debut. So, anyway, how did Lord Nathas become a part of Ritual Death? How would you say that he changes the group’s energy?

Sebastian [Lord Nathas] is obviously from Italy. He moved here many years ago, and we just started hanging out. He came to our rehearsal place. He just had the same values and the same mindset as us. So, he slowly just became part of the crew. And then, we decided that we needed a live bass player. He was my first choice because I know his dedication, and I know he’s a stable man who I can trust. So, yeah, Ritual Death hasn’t changed, but it has just become a stronger force with him on our team. It feels better because I know where he stands. I know he will never let me down. And he has good ideas, and his vocals surprised me — how well our vocals work together. That wasn’t planned, but when we were in the studio, something in my head told me: Yeah, let’s try to put him in front of the mic and see how it sounds. And yeah, it works really well! So, it’s just one more tool to make the vision complete.

Yeah, the chemistry there is unreal. On Ritual Death, there’s an astonishing balance between the primitive rawness and the beauty with H. Tvedt’s keyboards and whatnot. Is the balance something that’s hard to achieve?

For me, it’s natural. I mean, the songs demand it. The songs themselves know where the beauty and the rawness will be. So, for me, when the song is ready, it tells me where the keyboards go. And yeah! It just comes naturally! But, of course, also it helps A LOT that we had the genius mind of H. Tvedt for the longer synth parts and outros.

I guess that’s the way genius comes! The record clearly feels very organic, so that makes sense… Obviously, I love your vocal work on the album and just really everything you’ve done as a frontman (and as a bass player and guitarist as well). On Iblis Manifestations, you told Shayan of Trivax that your wonderful collaborator from other projects, Øyvind Sundli, was the one who got you to start singing. How does your approach to vocals differ now from when you first started?

I guess my approach is much the same, but I have gotten better and spend more time planning placements of words and small technical things I can do better. Depending on the project of course.

Ritual Death recently played what I heard was a stellar show at December Darkness in Sweden, and you’re also going on tour in January. So how was the experience of the festival, and what can fans expect next month?

In that mask, it’s very demanding because once that mask is on, there’s no communication with the people around me. You just have to trust everyone around you. Sebastian [Lord Nathas] and Esten [Nosophoros] — we need to have them sharp. And also, I can’t see much. Breathing is hard… But what they can expect is a different lineup because the drummer can’t make it for the tour, and the synth player [H. Tvedt] has quit… So, we have to have Omega from Darvaza and Nubivagant step in on drums.

So, what they can expect is just hard-pounding compressed darkness delivered with frustration and fire. Wrapped in the black cloak of Death.

I think it’s really important for people to know that you actually co-founded Celestial Bloodshed together with only the original guitarist who soon dropped out of the picture. Obviously, that group, one of the greatest of all time, has long disbanded due to tragedy. Is there any chance that you might record some new material as part of an anniversary reissue or something similar?

No. I don’t see that. I’ve moved on, so I don’t see the reason to dig that up. In my world, that would be only to get attention, and that’s not what I do. No. The material I have left over from that period will come out in some form but under a different name or with another band.

Thank you so much, Wraath, for your time and immortal art. We can’t wait to hear what Ritual Death does next!

(Buy Ritual Death’s work here at Regain Records’ Bandcamp or at Shadow Records’ webshop. Also, make sure to check out the multi-talented Wraath’s DIY company: At the DCD Store, you can find badass fashion items and exquisite leatherwork by the genius himself: https://www.dcdstore.com/.)

This year brought us one of the greatest black metal albums of all time, some other great releases, and many wicked developments.

You won’t survive the “Storm of Evil” that these bands are about to unleash!