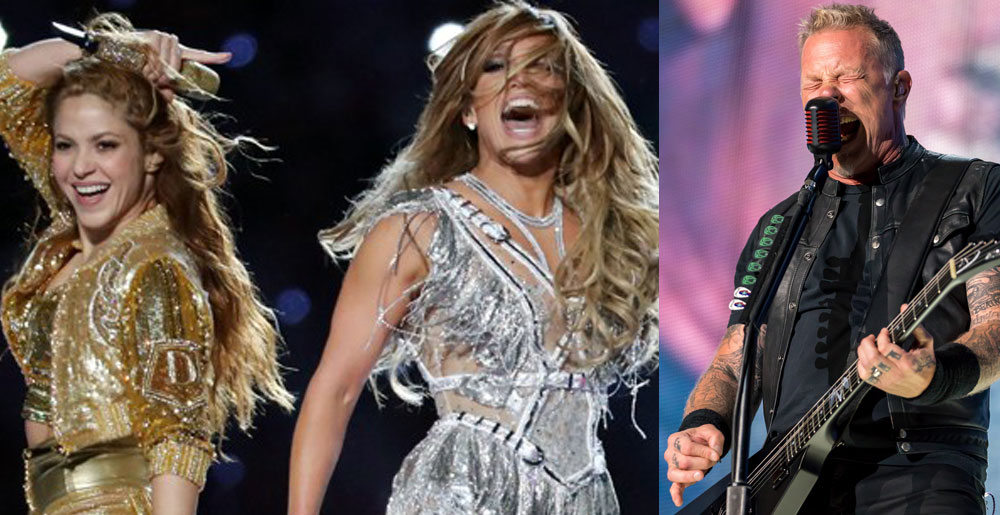 Shakira and J. Lo’s Super Bowl Halftime Show Proves Why Rock is Dead (and Why Metallica Will Never Play the Super Bowl)

Two weeks, two mass cultural events in America that have proven rock is completely dead in the water, music for dinosaurs unable to accept that times have changed.

Last week it was the Grammys. In an editorial published the day after Tyler the Creator, Billie Eilish, Lizzo and others put on stunning performances while Aerosmith stunk up the joint and Ozzy could barely walk to the podium to present an award, I argued that rock’s time in the sun has passed, eclipsed by more vibrant, forward-thinking music that captures the imagination of today’s youth and better represents the times we live in.

And this week it’s the Super Bowl Halftime Show. I was positively floored by Shakira and J. Lo’s performance, nothing short of a remarkable achievement on multiple levels (more on that in a moment), moved to tears at their triumphant finale.

Then I tried to imagine what it’d be like if Metallica got the Super Bowl Halftime Show nod, as the band’s fans have been angrily campaigning for and complaining about for years. That’d be fucking awesome — don’t get me wrong — and a celebratory moment for metal for sure. I’d love every moment of it.

But would it be as impressive as last night’s performance? Would it connect with the audience in the same way?

At least one high-profile metal curmudgeon sees no reason to pose those questions: our own resident president of the U.F.O and Saxon fan club, radio personality Eddie Trunk. I spent my high school years listening to Trunk’s radio show and discovered a ton of music through it — I have a tremendous amount of respect for him, and it’s not an exaggeration to say I wouldn’t be where I am now without his contributions to the scene. That said, the guy has not grown with the genre at all and remains hopelessly stuck in the past. He’s a classic rock guy now, and that’s it.

The tweet, naturally, instantly caught on, enjoying the spirited affirmations of fellow old white men the nation over.

Ignoring the gap in logic that Guns N’ Roses were only in Florida because of the Super Bowl, already deemed Not Good Enough for the main event by the powers that be, Trunk’s tweet comes off as more tone deaf than Joe Perry at the Grammys. By calling the performance nothing more than an “exercise / aerobics instructional video,” Trunk put down several entire rich musical genres (hip hop, R&B, dance, etc.) in one fell swoop with the elegance of a middle schooler taking a firm stance against the kids who liked rap instead of metal. It’s also completely dismissive of the incredible talent and hard work that goes into those choreographed dance routines, as if that’s not also true for shredding on the guitar. And finally, I don’t believe he meant it this way, but his statement reeks of sexism and racism: on a night when two women, each of color, and each over 40, performed on arguably the biggest stage in the world and fucking SLAYED it, Trunk couldn’t do any better than “worst halftime show ever.” Do fucking better, Eddie.

Back to Metallica: anyone who’s ever seen the band live (most everyone reading this, I’d wager) knows the band’s shows are huge, with giant video screens and elaborate production, often utilizing an in-the-round format that would make a Super Bowl appearance an easy enough transition. But could a Metallica halftime show be Super Bowl huge?

I’m having a hard time imagining it. They’d open with the intro from “Enter Sandman” to riotous cheers, an anthem that’s become more associated with sports at this point than with metal itself. They’d segue into a few bars of “Sad But True,” perhaps joined by Kid Rock, and the audience would go wild — America’s hero, Kid Fucking Rock! (groan). And then… then what? The band’s catalogue is full of amazing songs, but cuts the general public would recognize are limited. I can’t picture Metallica holding the audience’s attention while blasting through the middle section of “One,” I don’t see “Master of Puppets” translating, and the band’s new material is a non-starter. By contrast, Shakira and J. Lo knocked out the hits one by one — even if you’ve never consciously listened to either of them, you know these songs, they’re ubiquitous!

And none of that takes into account the visual element, as important a part as any for a performance broadcast on national television. I’m having a difficult time picturing a rock band, with only four people more or less anchored to their spots on stage, being one iota as entertaining as Shakira and J. Lo’s “aerobics” and a sea of backup dancers.

Oh, I know: a lot of their performance was lip synched. That’s how it’s been with all halftime show performers for years. The NFL required it for The Red Hot Chili Peppers to play, and they’d do the same to Metallica, you better believe it.

Simply put, a rock show just doesn’t work anymore on the nation’s biggest stage. Coldplay (2015) were a fucking snoozefest, Maroon 5 (2019) were laughable, The Who (2010), Tom Petty (2008) and The Rolling Stones (2006) all completely lacking in energy and any kind of charisma, too old to carry a show of that size. Red Hot Chili Peppers weren’t even the main attraction the year they played (2014); they were a special guest of pop star Bruno Mars. By contrast, what was the most memorable Super Bowl Halftime Show in recent years? Beyonce! It’s no coincidence that performance also came from a woman of color. She not only captured the moment, she fucking owned it. So did Shakira and J. Lo. And in Miami, no less, home to a massive Latinx population.

Yes, there was Prince, who in 2007 put on one of the most memorable Super Bowl Halftime Show performances ever. But there is only one Prince, and he’s the outlier. You won’t find another artist with rock cred who could put on a show that special. And that’s if we can even consider Prince to be a true rock artist; he was all over the place musically. What’s more, it’s also worth mentioning that Prince was very much Not A White Person.

Trunk’s got one point, at least: Guns N’ Roses would be worthy halftime show performers. They’ve got the hits to do it, the widespread cultural cache. But would it translate visually? I suppose the band would find some way to make it look interesting, but there’s no way that could live up to the excitement of a halftime show featuring a more current genre of music, one that captures the times we live in instead of harking back to 30 years ago when America was allegedly “great.”

Which brings us back to my point: rock’s time in the sun is done, and that has never been more clear to me. Part of that is musical — been there / done that — part of that is demographic, as America’s populace shifts away from white men, and part of that is cultural as trends evolve.

For what it’s worth, last night’s halftime show was not without rock moments: Shakira donned a guitar, played a full drum kit and at one point her band kicked into roughly 10 seconds of Led Zeppelin’s “Kashmir,” all too brief. But that’s just it, isn’t it? Rock is a sideshow now, a fascinating curioso, not the main event! For her part, J. Lo looked like friggin’ Rob Halford up there at one point, donned in full leather-and-spikes garb, with backup dancers in the same. Metal fashion is in, haven’t you heard?

I’m not saying rock will go away any time soon — far from it — and I’m not saying you should stop listening to or enjoying it (I’m certainly not gonna stop!). I’m saying that rock as a cultural phenomenon has peaked, and the clock isn’t moving backwards. Rock’s 70-year run so far has been incredibly impressive, when you think about it!

But there’s no sense in complaining about or lamenting its demise. It’s time to let go and allow others to come in and take over. The kids know better; they always do.

Sponsored Links from Across the Internet
Show Comments
Related Articles
New Stuff 0
Check Out this Ben Stiller and Bob Odenkirk Metallica Skit from 1992
January 29th, 2023 at 11:00am Mandy Scythe

Metal Sucks Greatest Hits
0 -
That Time Shaun Got Drunk and Filmed a Music Video with His Cat
0 -
The Best Metal Albums of 2013, As Chosen by Metal Musicians Themselves — Part I: Machine Head’s Robb Flynn
0 -
The Top 25 Modern Metal Frontmen: The Entire List in One Place
0 -
Editorial: Your Dead Metal Heroes Were No Angels
300 -
Free Download for Your Listening Pleasure: NYC Sucks, Volume 2, Featuring The Best of New York City’s Metal Scene
0 -
Watch: Bruce Dickinson Rips On Fan for Smoking Weed at Iron Maiden Show