Metal Sucks
Metal Sucks Sweden’s Prime Minister Is a Big System Of A Down Fan Beavis and Butt-Head Do The Universe Drops This July, Will...
- Tweet SHARE
Enlarge
Metal in the Media 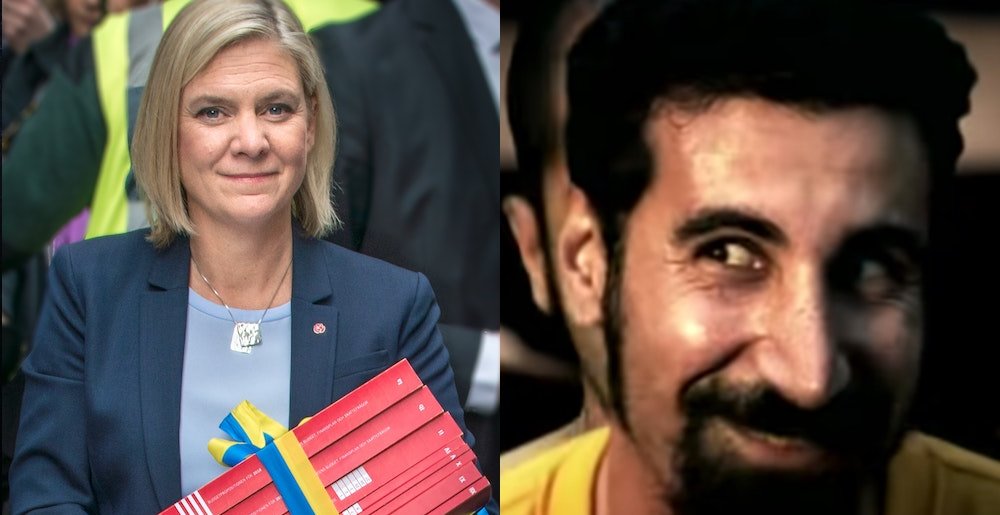 One would imagine that if you were a major member of the Swedish government, you’d let the world know that one thing matters above all else: raging melodic death metal! As a representative of the birthplace of melodeath, you’d probably be eternally enamored of Entombed, Darkane, and Amon Amarth, right? But just as countless Americans worship bands from across Scandinavia, so too does Swedish Prime Minister Magdalena Andersson favor an American act — and an Armenian-American act, at that!

As reported by Loudwire, Magdalena — metal name, by the way! — was asked by Swedish radio station Bandit Rock about her favorite rock bands. And her answer was a resounding salute to System of a Down, of all bands. And when the hosts pressed her further, she added that she likes to throw on SOAD at parties — but that when it comes to official events, her husband, probably afraid of what will happen if she blasts “This Cocaine Makes Me Feel Like I’m On This Song” at a nice dinner with friends, takes over:

“When it comes to rock, it’s System of a Down…Yes, they are really awesome!”

“Yes, absolutely, and when it’s [a] party…No matter what kind of party, my husband takes over.”

On the one hand, this is awesome. System of a Down have infiltrated the Swedish government, and it will only be a matter of time before the new Swedish National Anthem is “Aerials.” But it also means that now, feeling betrayed by their homeland, countless Swedish musicians will begin flooding into the U.S., seeking a nation that better understands them. And you know what that means? Dismember local shows. Amon Amarth local shows. Necrophobic playing Honda dealership openings. The Swedish invasion is near! God is dead, the year is one!

In all seriousness, cheers to Andersson on her good taste.

Tags: sweden, system of a down